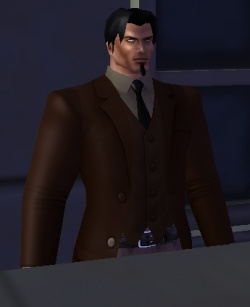 Amon Aser is a wealthy philanthropist who is famous throughout the world for creating the company Styx Industries. Styx derives its name from the mythological river which borders between the Underworld and Earth. Styx's primary area of research was medicine as well as prolonging life through new and inventive forms of treatment. Styx Industries pioneered many breakthroughs in combatting diseases like Alzheimer's, dementia, and progressive organ failure. It is through this company and its many endeavors that Aser earned his fortune.

Aser donated several thousands to charities as well as becoming a primary donor in the Boomtown Reconstruction effort and the Atlas Reconstruction project that took place after Deadwringer's attack on City Hall at the beginning of May 2011. Aser's charitable contributions extend to further than just Paragon City. He sent millions back to companies, charities, and military efforts in his original birthplace, Cairo, Egypt.

Amon Aser was a respected contact in the superhuman community, being known to work with heroes in efforts to bring criminals to justice. He recently purchased the defunct Strongwall Penitentiary from the state after it was turned over from Longbow control due to a severe breakout that required Challenger intervention. The breakout at Strongwall resulted in the escape of several high-powered convicts such as Exadeus, Goldmonger, Powerlaser, and Cyborg Sinister. This incident led the state to no longer believe that funding the Strongwall project was a viable expense and they shut it down. They then auctioned off the land and facility to the highest bidder, who just happened to be Aser.

Aser converted the defunct Strongwall Penitentiary into his own private prison with a pre-paid staff. The main purpose of the facility was to rehabilitate criminals using intense psychotherapy, a process many thought to be foolish before reformed criminals like Paul Ooshun and Rockmight began surfacing due to the intervention of heroes specializing in understanding the villain mind. He recruited Jenna Faris, a rehabilitation specialist, to become his second in command at Styx for this massive project. While their goal started out noble, it was eventually warped into something terrible.

Aser sought a way to create a prison in a place far away from Earth, so as to house the most vile and powerful villains on the planet. This decision led him to trust the apparent genius of Exadeus, who promised to build a portal to the Dark Matter Zone. Aser jumped at the opportunity to build a prison there and readily made a deal with Exadeus to provide him with the hero Johnny Turbo in exchange for the portal's construction. Turbo was admitted into court-mandated therapy and rehab with Dr. Ingeborg Schwanz in late 2011. Aser paid Schwanz under the table to perform an experimental hypnotherapy that would exaggerate Turbo's psychological problems in order to get him committed to Strongwall.

With Turbo in Strongwall, Exadeus began his construction of Aser's portal. However, The Challengers were able to discover that JT was in Aser's hands and immediately sprung into action. When they arrived at Strongwall, Aser broke down and admitted to making a deal with Exadeus and swore that he was not in his right mind when he did so. Exadeus then activated his portal, which allowed him to summon in mass amounts of dark matter and take over Strongwall. He released all the inmates and instigated massive riots throughout the island. The team rescued JT and took the fight to Exadeus, who had just killed Aser's wife, Tariah Aser. Exadeus was ultimately defeated and trapped in the DMZ, where he presumably died.

Strongwall was destroyed during the conflict and Aser was arrested. In a shocking turn of events, Aser was allowed to walk free for his crimes as neurologists pointed to Exadeus as the cause of his sudden delusions and mental instability. He was supposedly "cured" through intensive therapy and released. Aser stepped down as the CEO of Styx Industries and left his company to Jenna Faris. He spent the next months mourning his deceased wife and attempting to rebuild his shattered mind.