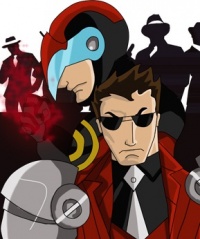 Tucker "Powerlaser" Clay is a professional supervillain and crime boss. He is heavily involved in several organized criminal activities like smuggling, drug trafficking, weapons dealing, and racketeering. He commands respect through his two enormous laser-cannon arms which can burn a hole not only through skin, but through almost any metal on the Earth.

Tucker Clay was born with a rare genetic mutation that allowed his body to produce mass amounts of excess energy. He decided to cash in on this and sold himself off as a lab rat to Crey Industries. They grafted a long forgotten technology known as "Uber-Lasers" in place of his arms. Clay was furious with their mistreatment of his body, but because of the contract he signed, he was unable to take legal action against the company. Forced into freak-hood, Clay became a career hero and joined forces with Snow Enterprises and The Headliners to capitalize on his new powers.

Snow Enterprises CEO Garret Snow had promised to remove Clay's laser-arms if he was able to revitalize The Headliners' interest in working for Snow after their poster-boy Coldcrash began exercising his free will. His eventual failure was apparent when the team travelled to Japan and dismantled the conglomerate and arrested Garret Snow. After that, he went under the radar and built a powerful criminal organization. He found himself arrested shortly after, however, and sent to Strongwall Penitentiary.

He escaped during the eventual Cyborg Sinister breakout and resumed control of his illegal empire. He gained dark matter weaponry for himself and his henchmen through Exadeus and used this technology to apparently "kill" Coldcrash. This act put him on the map in the criminal underground and led several other crime bosses such as Vegas, Snake Eyes, Knuckles, and Showtime to begin working with him. As time has past though, Showtime and Powerlaser's relationship has deteriorated, their politics and styles not meshing well. They erupted into a brutal gang war that was stopped by The Challengers on the request of Amon Aser.

Aser arrested Powerlaser and committed him to a revitalized Strongwall Penitentiary, which he was privatizing and re-opening. However, it was revealed Aser was merely a pawn in Exadeus' plan to gain access to the dark matter zone. When Exadeus took control of the prison and released all the inmates, Powerlaser and Showtime made amends and worked together to fight off The Challengers. They were both defeated, but escaped while The Challengers were distracted fighting Exadeus. The two reassumed their position as powerful mob bosses. It is currently speculated that Powerlaser and Showtime are once again uniting for a common cause.