Comrade Smersh is a powered-armor hero from the former Soviet Union. A member of KGB Special Section 8, he is a trained fighter, used by the Soviet Union to combat super-powered threats. Smersh is a Soviet version of Iron Man crossed with Captain America, and was created primarily because the player wanted to have a fire-sword-wielding powered-armor character.

Smersh is the Field Commander for KGB Special Section 8. He has never been a member of any other supergroup.

A gruff exterior belies a warm heart underneath. In the words of Soviet Shadow, "Do not let hard-assz act fool! Is much for gruffness, often to act with cynicism and moodiness, but is heart for gold underneath... all idealisms... like Rick in Casablanca, but for Communism!"

Smersh has no inherent powers of his own: He is a baseline human. His personal abilities include fair marksmanship, good hand to hand combat skills, and a high degree of fluency with both computers and languages. His training includes Spetznaz commando training and KGB foreign intelligence methods.

Smersh's powers stem from his use of powered armor. His original armor (Comrade Smersh) is a suit designed under the Bogatyr project, to help close the superpower gap between the United States and the Soviet Union.

Smersh has designed a number of other armor suits, both for his use and the use of others. The other suit which has seen the greatest use is the Containment System Suit (Commander Smersh) which uses a variety of non-lethal methods to arrest criminals. While in this suit, Smersh has been known to make use of a magical talisman, a gift from Shae Firewarder. This talisman allows him to call up three 'bodyguards' in the form of fire imps for additional protection.

Using an ACDAM (Active Combat Damage Absorption Matrix) system, the suit is designed to take heavy punishment and protect the wearer in nearly all conditions. The ACDAM is a field, and as such can protect the wearer even if a helmet is eschewed. A helmet is optional, and generally only used when sensor equipment or full environmental protection is indicated. The energy of most attacks is stored in a kinetic battacitor, for later use.

The absorbed energy can be used as kinetic attacks in hand to hand combat, often taking the appearance of a flaming sword. The power levels of the offensive systems are fully adjustable, and are generally kept at non-lethal settings. The offensive settings also have an additional setting useful for lighting cigarettes.

The suit uses some of the absorbed kinetic energy to power rocket thrusters, located in the boots of the armor suit. Fins on the boots provide for aerodynamic movement. 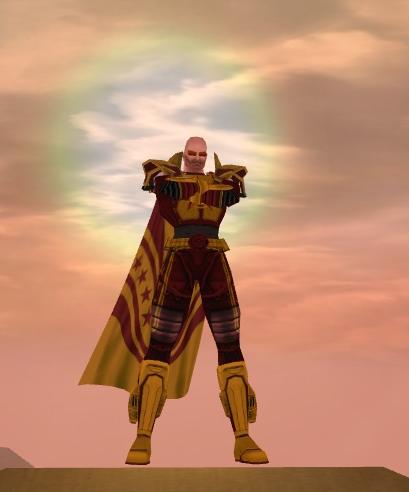 While not capable of teleportation of the occupant, due to power and mass restrictions, the armor does have a teleportation system, hooked up to Special Section 8's secure teleportation network. A simple coded voice command activates the system, allowing the user to change virtually instantly between civilian garb and the battlesuit.

The original kinetic combat system on the primary suit has been modified to serve as a 'kinetic containment unit', a non-lethal method of capturing suspects.

In addition to the primary kinetic containment unit, a set of emitters located in the shoulders of the suit project a series of incapacitating directed energies, inhibiting an opponent in a variety of ways.

The suit's primary motive power is a ground-effect system, designed for rapid mobility around the city. A jump-pack is attached to provide occasional vertical mobility.

Similar to the primary suit, a simple coded command can teleport the battlesuit to the user's location.

Smersh can occasionally be quick to anger. In these cases, he is often at a disadvantage, as he ignores his intellect and follows his heart. Those close to Smersh make excellent kidnapping targets, for tempting him into doing something stupid.

Smersh is well into middle age, and does not treat his body as well as he should. His addiction to cigarettes and an early side effect of his armor have left his heart in poor condition.

Finally, Smersh, while competent and tough, is comparatively weak when he is denied access to his armor.

When he is outside his armor, Smersh is known to carry a Crey freeze pistol, a univeral communicator, and a pair of sunglasses with unusual modifications, including infrared viewing and false retinal patterns. 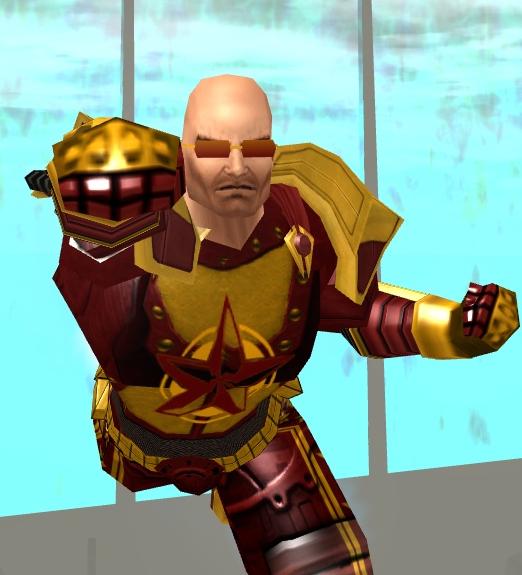 Yevgeny Ivanovich Korsakov was born in Moscow on March 10, 1957, second of two children of a sanitation worker and an elementary school teacher. His mother died in 1966, and Yevgeny was largely raised by his father and older sister.

Yevgeny was born in a time of promise for the Soviet Union, and dreamed as a boy of becoming a cosmonaut after seeing Yuri Gagarin in a parade. However, he did not do as well in school as his sister, a talented musician, and was faced with little choice but manual labor or joining the Red Army, which he did in 1976. The military life seemed to suit Yevgeny well, as he quickly was assigned to Spetznaz commando training.

During the occupation of Afghanistan by the Soviet Union, Yevgeny saw combat on several occasions, and learned Farsi from some of the locals. He distinguished himself in an action that is still considered classified, as he was the last member of his unit to survive. This incident, involving combat with rogue Fifth Columnists and American forces, resulted in his transfer to KGB Special Section 8.

As an agent of the Section, Yevgeny travelled all over the world, fighting American interests. He was assigned a Bogatyr-class battlesuit, and a code name: Smersh. (Special Section 8, at the time, had only a few code names. When an agent was captured or killed, the name was reassigned to a new agent. The previous Smersh had been killed in action by General Monroe of Freedom Factor.

It was Afghanistan when the end came, for both Smersh's career and his battlesuit. An Afghan mutant generated a sufficient electormagnetic pulse to wipe out the armor's memory cores. Smersh was able to escape, but unable to call for backup, or to contact his superiors.

Smersh found a rucksack, and walked. Through the Khyber pass, to Karachi, Pakistan, and the Soviet embassy there. It was there he learned that Gorbachev had stepped down in favor of Yeltsin, and the Soviet Union was no more.

After that, Smersh drifted, unwilling to return home, and found himself in Paragon City after some time. Here he settled, doing odd jobs, technical support for software companies, and things of this nature. After he learned of Linux, he began to work on reprogramming his armor, slowly, in fits and starts.

Yevgeny Korsakov's life went on in a normal fashion for several years. Until the Rikti came.

During the invasion, Smersh felt utterly helpless. His suit, which he had been working on restoring, was nowhere near operational. He attempted to lead a group of frightened civilians to safety, past the Rikti hunting squads. To a degree, his Spetznaz training was an asset here, but he was getting older, softened by civilian life. Out of practice, and unarmored.

Not all of those civilians made it to the shelter alive.

After the war ended with the success of the Alpha and Omega teams, Smersh renewed his efforts and brought his armor back up to marginal operating status. Unwilling to wait any longer, he went to City Hall and registered with Paragon City as a superhero.

That same day, he was contacted by his former commander, the Komisar, and urged to rejoin KGB Special Section 8. The Komisar had sent invitations to former Special Section 8 agents all around the world. Some of them chose to join him.

You kept this file, a full report on you and your activities in Paragon, given to you by Comrade Smersh, as a reminder of...

Cog Sprocket planned a memorial service for Comrade Smersh. After eulogies were given by Red Robin, Red-Eye and Capt. Valor at this memorial service , Comrade Smersh appeared, claiming he had not been killed at all. The Komisar proclaimed this to be the real Smersh, that he had merely been working under deep cover, and that there was nothing to worry about.

Investigation showed that this man, claiming to be Smersh, was who he claimed to be... though he had changed. He was cold, and cruel, and those closest to him did not really believe that it was him.

It was later that the real Smersh escaped from his prison , with a terrifying tale: The teleportation systems on his armor had been hacked, used against him to fake his death, by the Komisar. The one that had been running around, appearing to be him, was actually the Czarist Spy , Smersh's Praetorian duplicate. The Czarist Spy had been captured some time ago, but had escaped from a seemingly impervious cell.

The Komisar had been reprogramming the Czarist Spy with memories copied from Smersh's brain, though no one was certain to what end.

Smersh, with the aid of others, then raided a Malta facility, to gain access to their secure networks, and hacked his own teleportation network, to get his armor back. Thus outfitted, he was prepared to fight the Komisar... but the Komisar had other plans.

The Komisar, a master manipulator, was using hero teams to clear up his loose ends, even going so far as to show himself to the White Knights, Freedom Factor, and Guardian League.

All of this would lead to a startling revelation: the Komisar was not a human, but an extra-dimensional entity of extreme age, who had travelled the worlds, attempting to set up totalitarian global governments. The Soviet Union, the Komisar's latest attempt, had failed, and the Komisar was merely trying to clean up his networks before moving on.

The Komisar had used the Malta Group to obtain the latest in portal technology, and then used heroes to destroy the evidence.

The final straw was the Komisar, sending one of KGB Special Section 8's own members, Red Diva, attempted to assassinate Comrade Smersh. Comrade Smersh called for a tactical planning meeting , and sent Red-Eye, one of his agents, to hunt for the false Smersh .

With the aid of a large number of heroes, including among others the Guardian League, Freedom Factor, the Defenders of Paragon, and the Dauntless Reverie, KGB Special Section 8 was able to track down and, by concentrating on the People's Puppy, surprise the Komisar.

The Komisar escaped to another dimension, through the portal device he had built, while Red Diva, Red Protecter, and the False Smersh were all imprisoned in the Ziggurat. Red Diva promised a strong legal battle, however: her accusations promised a great deal of strife for Smersh in the future...

The Return of the Komisar

Unbeknownst to all but a few, Smersh's head is capable of bringing down enemy aircraft if the light shines off of it at just the right angle.