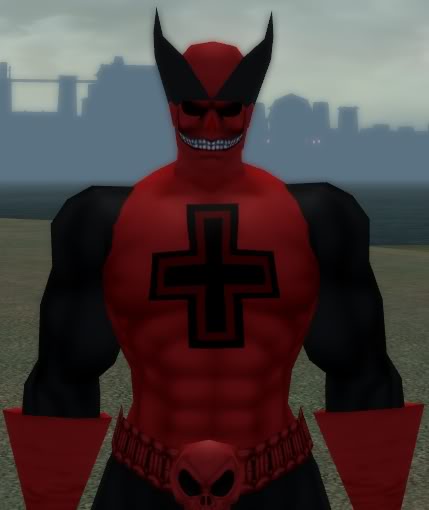 While most think of Painiac as nothing more than an insane super-powered shape-shifting imitator of the Xanatos family, once upon a time he had been a peace-loving scientist by the name of Klay Adams from the planet Gorgon. Despite not being blessed with any super powers, he posessed near superhuman levels of intelligence. Due to his benevolant nature, he used it only for peace - creating new medicines and cures that he distributed freely around the population of Gorgon.

Xanatos first encountered Klay Adams when he travelled to Gorgon in search of information on the coming storm. Realising that Klay was a man of great scientific knowledge and medical prowess, Xanatos requested his aid. When Xanatos asked the scientist for help, he was shocked when Klay refused. Klay Adams was loyal to the despotic and evil ruler of Gorgon - an intergalactic conquerer by the name of Galacton. Galacton considered Xanatos an enemy of the state and forbid any of his followers from helping him.

Xanatos begrudgingly accepted this and prepared to leave Gorgon, only to be ambushed by Galacton and beaten within an inch of his life. This shocked Klay Adams, who had always thought of Galacton as a compassionate and wise ruler. Realising his earlier mistake, Klay intervened, and distracting Galacton long enough for Xanatos to defeat him. Despite being bested by the hero and his new found "scienkick", Galacton had one more trick up his sleeve - a powerful weapon known as a psionic bomb. It temporarily blinded Xanatos, and seemingly flatlined Klay's brain. Galacton was able to escape, and when Xanatos was finally able to see again, he decided to leave the planet. Before leaving he placed Klay Adams in a secure coma ward. Thinking his short-term ally's mind to be lost to the world.

Several days later Klay woke up feeling a bit different. His latent ability to manipulate energy was awoken due to the psy-bomb. The specific manner by which his powers manifested themselves was due to his own personality. His powers were strange at first. He was like a walking central nervous system - able to control the pain of those around him & create powerful red fire-like energy. The reason for this is that the psionic bomb had completely destroyed his body, but had allowed his consciousness to live on. For this reason Klay has more in common with a chemical compound than he does a human being, and he is capable of shape shifting into other anthropomorphic forms.

The powers came with a price however. As the psionic bomb had caused something of a melt-down within Klay's brain. Driving him completely an utterly insane. As his ability to comprehend rational thought left him, only one thing remained in the red menace's mind: Xanatos. He had made him this way. He was going to find him. And he was going to make him pay. Either that or he was going to thank him. He really had no idea what he was going to do.

Paniac would later become an ally to Xanatos, ultimately meeting his end fighting by his side in 2012, against Rularuu, in an event that has become known as "The Battle for the Multiverse".