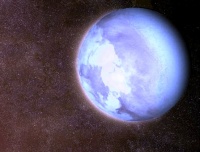 The planet Olympia is roughly 300 light years from Earth, orbiting the star, Betelgeuse. The exact distance from Earth is still widely disputed by the scientific community. Olympia is a frigid ice-world. The planet has an average temperature of –140 °C. It’s dense atmosphere is composed of mostly nitrogen, methane, ethane, and argon. The planet shares similarities with the Saturnian moon, Titan. Olympia has roughly three times the gravitational pull as Earth. Orbiting around the planet are its two moons, Celeste and Gorgoroth.

Glaciorian scientists believe that the evolution of silicon-based life on Olympia was the result of panspermia from its volcanic moon, Gorgoroth. Indeed, silicon-based beings thrive on the Olympian moon, although none have achieved sentience. The mechanism by which this life was able to adapt and evolve on frigid Olympia is both fascinating and complex.

The only sentient beings on the planet Olympia are the Glaciorians; a race of evolved humanoid beings. The Glaciorian are an ancient race, having existed on Olympia for over 100,000 Earth years. As a result, they are a highly technologically advanced race and have a robust cultural history. Glaciorians are able to traverse great distances in space using dimensional wormholes near their home system. Hundreds of light years can be traversed in mere minutes. Although they are a spacefaring race, they are not imperialistic and uninterested in territorial expansion. The Glaciorian are primarily scientists and observers, interested in the diverse universe in which they live.