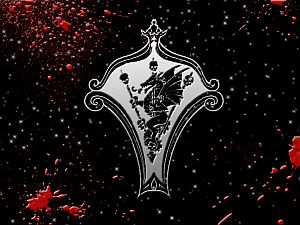 Adrien Farenheight Tepes was the Bastard born son of Prince Vladimir Von Tepes (aka; Dracula) and the mortal woman Lisa. Up untill his Father betrayed his mother, leaving her defenseless and branded a witch by local townsfolk, due to her relations with the Count, (and later killed by Fire by the townsfolk) Adrien served his father. When Lisa died she begged Adrien not to hate mankind, or seek vengeance against them for her death. He turned his fury towards the creature that lead her to her destruction and helped Abraham Van Helsing and his posse of Vampire hunters to slay his father.

Abraham and his fellow Hunters were very wary of Adrien, and for fear of the slayers retribution, Adrien falsified his name to him and his men, labeling himself instead as Alucard, his sires' Title reversed. Adrien tried to hide his nature from them as long as he could, but his capabilities and ability to garner knowledge from the undead, and use of magicks quickly brought Van Helsings suspicions. Ultimately the Hunter was able to accept Alucard for what he was, and accept his help in destroying the monster that was Dracula.

"Alucard" would later help Quincey Harker, (the son of Jonathan and Michelle Harker, companions of Van Helsing) with troubles involving Vampires as well. Lending the young man insight, and leading him to his nemesis' lair.

Years later a powerful Priest of occult named Shaft, would try to resurrect the fallen Dracula, in return for the gift of immortality. Alucard resurfaced after travelling the world, slaying vampires as he found them, and aided the Young Alexander Van Helsing in stopping the Power hungry priest from succeeding with his dark plan.

Ultimately Adrien, turned his back on mankind, seeing man commit evils unto himself, when plenty of monsters hunted him from the shadows. He noticed that as mankind developed more and more inventions, he began to believe less, and less in the supernatural, or pay any heed to these monsters around him. he then secretely buried himself within the earth for ages, in hopes to one day awaken to a world where mankind had destroyed the monsters of the world, or had at least come to his senses.

He awoke to find the world had more monsters then ever, and that the damned were not only numerous, but more bold then they had ever been before.

Alucard has found the descendants of Abraham Van Helsing live on today, and have made a life of hunting the supernatural.

Adrien views the world much differently now, he has come to realize mankind cannot be saved, and is damned as he is, to suffer in their ignorance and impudence. He has began to take in what it means to be a true creature of the night, having fed more on the precious lifesblood of his victims, though "they" are almost always evil themselves. He is slowly becoming one of the monster he used to hunt, slowly beginning to reach his true potential, as he no longer refrains from using his full powers...

Adrien has set up within Paragon City, in the Horror-Driven Area of Dark Astoria, having found the location a supernatural hotspring of spiritual activity. He has purchased a great deal of Property within Astoria and began to renovate the condemned buildings there to serve as his own domain.

Adrien has begun a movement akin to the belief's of the Carthian Movement within Paragon and the Isles, though he still embraces the Ideal's of bettering oneself through the teachings of the Ordo Dracul. He has began to use his strengths, Intelligence, and force of personality to better the Kindred there, viewing those he has seen as debased, and filthy shadows of true Vampire Blood.

Adrien has began to rally several like-minded Kindred, who have been attracted to his Bloodline, his mystique and his Aggressive take on the Vampire condition within Paragon and the Isles. His Coterie is quickly becoming a Covenant all its own...

(Note:* indicates Disciplines Learned outside Clan, by committing to blood rituals with mentors of different Clan's and accepting teaching from them.)

(Note: Had Originally been 4-6 dots in all of these Disciplines Prior to Torpor, but has lost some of the powers, untill he began rediscovering them) 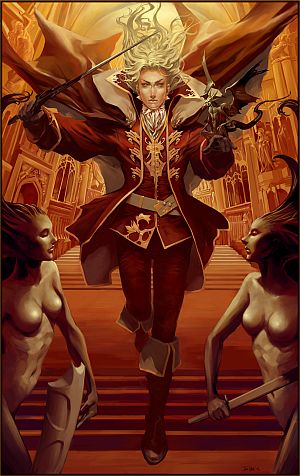 For more info on the World of Darkness, or White Wolf visit "http://www.white-wolf.com"

Like this Page!? Enjoy this Story!? Get to know the man Behind the keyboard at @Jade Defender here at Virtueverse!
Retrieved from "http://virtueverse.net/wiki/Adrien_Tepes"
Categories: Vampire | Leader | Mature Roleplay | Villain