Warning: Parameter 3 to renderSpoiler() expected to be a reference, value given in /home/uhotvu/public_html/vv/includes/parser/Parser.php on line 3333
 American Agent X - Unofficial Handbook of the Virtue Universe 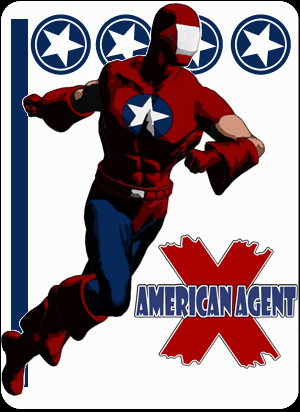 · Science Tanker ·
Affiliations
Super Group
The All Stars
Identity
Real Name
Unknown
Aliases
X
Birthdate
If this is indeed the original Agent X, he was operational in WW2, so he was already an adult by that point. Further information about his age is unknown.
Birthplace
Unknown
Citizenship
Presumed American
Residence
Unknown
Headquarters
Currently it appears X is operative mainly in Paragon City
Occupation
If this is the original X he is a former government sanctioned crimefighter. X is currently an independent operative
Legal Status
Unregistered by either the Rogue Islands or Paragon City
Marital Status
Unknown
· Known Relatives ·
Unknown
Physical Traits
Species
Presumed Human
Ethnicity
Unknown
Gender
Male
Apparent Age
Unknown
Height
Unknown
Weight
Unknown
Body Type
Unknown
Hair
Unknown
Eyes
Unknown
Skin
Unknown
Powers & Abilities
· Known Powers ·
Known powers include superhuman strength, resistance to injury, enhanced reflexes and speed, limited shape-shifting.
· Equipment ·
Due to unknown means X's "uniform" can change to match his current appearance. X carries a shield of unknown origin and composition which is highly resistant to damage.
· Other Abilities ·
X is known to be highly proficient in many forms of military and covert operations training. The exact extent of his training and the various sources are unknown.

All background on X is either classified or unknown. X will discuss exploits in his past when a situation deems necessary or it appears the information is public knowledge, but he does not readily disclose personal information.

Between World War I and World War II the United States government helped organize and ultimately sanctioned several differently styled groups of crimebusters as official U.S. agents. One of these groups were the American Agents.

Banded together in 1927, the American Agents were made up from mostly individuals with a military background, but who were no longer active in the service. The government extended an invitation nationwide to currently operating crimefighters with a military background to join the American Agents with the caveat that while they would remain a self-governing entity that operated without interference, if they were called upon by the government to perform non-military action for the “betterment of the country” they would answer the call.

While the American Agents enjoyed a relatively uninterrupted run of activity for a little over 20 years, this enforced stipulation proved to be the downfall of their team, as well as several other government founded groups who had made the same commitment. When the “betterment of the country” encompassed the interpretation of internal security the agreement became inclusive of registering code-names, moved to power registration, and ended with registration of personal information. Talks also extended to the possibility of requiring heroes to maintain an active position in the U.S. Armed forces, a job within an acknowledged law enforcement branch on the state or federal level, or to maintain a personal license and relinquishing control of activities to federal oversight and jurisdiction.

X was one of the first American Agents to outwardly challenge these regulations. In 1950, at the onset of the Cold War and the height of xenophobic suspicion, X left the American Agents and with the threat of the red scare looming disappeared from public activity.

While there are many varied and wild accusations that X was covertly part of an abundance of several different, and some conflicting, key turning points in history from the time of his disappearance in the 50's to present date, these are all as of yet unconfirmed.

Approximately 2 years ago public sightings of someone matching X's "regular" costumed appearance and powers began circulating through the Paragon City.

It can only be surmised that this is the original X currently operating under the moniker, although why he chose to begin public activity again at this time is unknown.

X is no longer and Active member of the American Agents. It is known that he still has ties in the government and to special interest agencies, but the nature of these ties are vastly unknown.

X became associated with the All-Star Sentinels of America shortly after his reappearance. At first he maintained his association as a group affiliate, joining the team to lend his abilities when the need arose, but as time passed he conceded to becoming a full member of the ASA.

When the ASA disbanded, he and several other previous Sentinels helped to reform the group into The All Stars.

While in his "regular" costumed state X seems to be somewhere around 6'3" and appears to weigh at around 220lbs, but considering his ability to "shift" his appearance he has been seen at different heights and weights.

Any and all details of his actual appearance, or if he is in fact human at all, is unknown.

X has a somewhat colorful personality that is usually associated with those that have some military and special operations backgrounds. X is also a bit "rough around the edges" as it is obvious that he is used to field work, and performing under less than optimal conditions and making the best of a situation at hand.

He is not much of a jokester, but does shave a sense of humor and is an overall easy person to get along with.

As a side note, the traits described above are what have been noted from recent contact with X. It is apparent that while he served during covert operations in his past his personality fit his undercover persona. This being said, it is possible that his current demeanor is much like his appearance, and those that think they know him really know only the facade that he appears as.

All background on X is either classified or unknown. X does not readily disclose personal information on the origin of his powers.

X has super strength that has yet to be accurately measured and an incredible resistance to physical injury. X is also faster than the normal person both in speed and reaction time.

X also has the ability to adapt and change his appearance flawlessly. His abilities are limited to individuals of similar body structure and same sex. The process for X to change his appearance takes quite a bit of concentration. As such, X can only hold 3 to 4 other appearances in his "physical memory" at one time.

X is known to be highly proficient in many forms of military and covert operations training. The exact extent of his training and the various sources are unknown.

Due to unknown means X's "uniform" can change to match his current appearance.

X carries a shield of unknown origin and composition. The shield appears to be highly resistant to damage from most sources. While the shield does not seem to be as immune to damage as X himself is, he uses the shield strategically as a target, giving his opponents (in his own words) "...something to aim for so they don't realize it ain't the shield they need 'ta be worried about".

X also often uses the shield offensively as a weapon, considering the edge can produce quite a concentrated surface for delivering the force of his blows.

X at one point extended an invitation to Burning Freedom, predecessor to Burning Liberty, to join the American Agents. Freedom declined, but he and X remained friends until Freedom's demise.

It is known that in the past X has crossed paths with the Red Scare and his Red Threat.

He has also been involved in conflicts with the Soviet Specter and his allies, though many of the details of his cold war exploits are vastly unknown.

All documentation apart from public record about X (ex. official public reports, newspaper clippings, video, etc.) is classified and not available to the general public.

It is unknown how highly sealed this documentation is, but it has been hinted that even the American Agents themselves did not have full disclosure on the information of their membership.