Amon is a stranded demon from another multiverse, one where perdition evolved along distinctly corporate lines. He is attempting to make the best of his situation by opening up new markets for UniStyxHellCorp, LLC and hoodwinking the competition (who do not even have a written mission statement, the backwards heathens).

Amon is the defacto leader of this multiverse's (extremely small) branch office of UniStyxHellCorp, LLC. He has worked with members of Foxtrot Company with the understanding that its members are strictly off-limits.

Demons of Amon's caste were deliberately bred to get around the limitations of creatures like succubi and incubi, such as their inability to fill out a form properly in triplicate. Carosiel, Undercountess of the Second Circle and Vice-President in Charge of Temptation, took these and other creatures of desire and bred them with the likes of accountants and stamp collectors in order to create a demon that understood the nature of desire while remaining apart from its distractions. Amon is therefore generally calm, efficient, and collected and (at least until recently) does not display much emotion.

He is familiar with a catalog of over 200,000 distinct emotions and sensations, but until his accidental arrival in this multiverse on his very first mission outside the office, he had never had the opportunity to experience most of them first hand. This has lately created a certain amount of strain, as he has lately found himself experiencing strange, inexplicable feelings for Ghost Widow, yet was forced to betray her as he appears completely incapable of grasping the concept of defying the will of Carosiel, or of UniStyxHellCorp in general.

Most of Amon's combat-relevant abilities derive from the infernal spark he carries within him. It sheathes his body, insulating him from direct harm, and when used offensively serves to augment his considerable physical strength. He can attack directly with the spark by summoning and riding a tremendous gout of lightning (see below); for limited periods, Amon may also convert his entire body mass to pure energy in order to evade physical harm, but doing so is exhausting and leaves him highly vulnerable afterward.

Amon can also siphon energy directly from his foes, leaving them weary.

As a result of his association with Ghost Widow, Amon has aquired limited ability to manipulate the energies of the netherworld. This ability manifests itself as bursts of negative energy or grasping, netherworldly tentacles.

The tentacles are highly inquisitive.

Amon can appear or disappear with a colossal burst of lightning, but his range is limited. He is naturally very swift on his feet and generally travels that way, with an assortment of various devices to scale inconvenient precipices when necessary. His wings are insufficient to lift his body mass off the ground.

As a member of the Sales and Marketing division, Amon's prime duty is to secure the corruption and entrapment of mortal souls. He is adept as sussing out secret, innermost desires, and always carries with him a set of helpful and informative brochures. He has also begun surreptitiously haunting the halls of Pocket D while researching a new seasonal Vice Catalog for the indecisive abandonné.

Thanks in part to his succubus heritage, Amon may assume the form of virtually any humanoid creature (but see below). He has seldom had call to do so, however; the most notable example was when he assumed the form of Ms. Liberty's personal secretary as part of a subterfuge to clear out a Longbow base.

Because he hails from another and until recently entirely separate plane of existence, conventional methods for binding and entrapping demons will not work on him without additional research and modification.

Because this is his first field assignment, and one for which he was not trained or prepared, Amon's sales pitches to mortal audiences tend to be blunt, to the point, and lacking in any degree of refinement or finesse. He is also physically ill equipped to deal with many mortal toxins.

Because of a combination of certain complicated regulations and astronomical portents, during certain phases of the moon the only alternate form Amon may assume is that of elderly television spitfire Estelle Getty. The reasons for this have never been divined.

He also carries a USCH-brand KPPMD (Kitten-Powered Personal Medical Device), which harnesses the power of tiny souls in mild discomfort to restore his damaged essence. He can also use the KPPMD on others, with slightly less effect. Recipients of this treatment are advised not to sign anything. 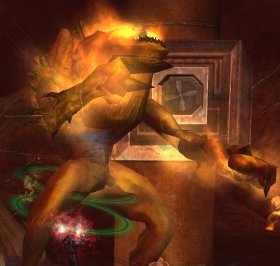 This is not Bat'Zul of Accounts Payable.
Amon was given the honor of delivering important papers relating to the Henderson account as a result of his highly efficacious marketing slogan, "You May Be Damned Later, But the Goat Is Available Now." However, gross clerical error and rampant apathy on the part of the portal operators combined to shunt him into a previously unknown plane of existence. This was not immediately obvious, and at first he believed his inability to contact the home office was due to the execrable lack of public WiFi hotspots in the area. 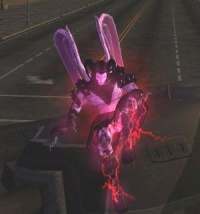 Battle-garb of the Sales and Marketing Division
His growing suspicions were confirmed when he sought out the sluggardly and lazy Bat'Zul of Accounts Payable, only to discover that it was in fact Bat'Zul the Imprisoned, a similar but entirely distinct entity. With this knowledge he redoubled his efforts to locate a functional Under-Nexus of Pthtah to boost the signal strength of his laptop, to no avail.

A breakthrough occured when he heard of the quiescent god-beast known as the Leviathan sleeping beneath Sharkhead Isle. Harnessing the power of its awakened eye, he was finally able to contact the home office and explain his situation to Carosiel herself. In reward for his dilligence he was authorized to establish a UniStyxHellCorp branch office in order to pave the way for an eventual hostile takeover of hell. With the help of Arachnos daddy's-girl Corrupting and some unintentional aid from Daughter of Law he was able to secure sufficient funding to acquire his own base of operations and acquire a pair of regular subcontractors. Recently, the home office has managed to send him a small (and slightly defective) staff of two, including executive assistant Ms. Exquisite Agony and a shiftless imp named Nigel, along with another entity of mysterious and ominous purpose.

In the wake of the recent and highly disruptive Rikti invasion, Amon found himself working with some unlikely allies in the contested zone, working to repel the repulsively non-metaphysical invaders. He also secured a small portion of the mysterious entity known as the Hamidon for further study.