She can come off cold and aloof. In the past, she was called a ‘stuck up princess’. Like any normal teen, she thinks she knows everything and won’t listen to those that do. Among friends, this changes into someone that is very caring and protective of them. Playful and loving, she is loyal to those that are loyal in return.

She had a perfect life. Never a want in her heart, given all that she ever needed or wanted by her parents and brother. She hung out with her brother a lot, learning her skill with the swords from him. Yet she would feel depression when her brother left a year before her graduation. She kept going on though, her parents seeming thrilled their son was gone from their lives for good. Honor student, perfect scores on her tests, and on her way to Harvard. Yet word got back that her brother had been arrested for stealing a sword in Paragon. Giving her parents the excuse that she was going to Harvard, she instead went to Paragon to find her brother. There, she found out he was now on the Isles. The only way to get there was to become a criminal, and that is what she set out to do.

Within the private collection of a proclaimed ‘Witchhunter’ was a sword. She snuck into his home and went to steal what was called ‘Widow’s Angel’. Everything was going fine till the owner happened to show up. She under estimated him and found herself in chains moments later. The breakout would lead her to the Isles and on the hunt for her brother. Unknown to Isolde, the sword had claimed her for it’s owner and had hidden itself within her body until their freedom.

She did find Kenneth. They spoke of their incestuous feelings towards each other. It was short lived though with her brother joining up with The Giordano Family, a little known mob family. Now he picked them over her and left her on her own. She wasn’t depressed as some might thing she would be after getting ‘dumped’. She was angered beyond understanding. Knowing the mob family disliked Arachnos, Isolde joined up with Recluse’s Furies. Time will only tell what will happen to the stuck up stalker.

Both swords she started out with have come up missing. She will openly admit dumping the sword her brother gave into the ocean. The Widow's Angel has taken it's place back on her back as a tattoo. She has yet to see it or have one tell her that it is there.

Isolde left the islands to wander the world for a few years. She was doing some soul searching after her last love affair ended quite badly. The woman has returned though now more alone than ever now. She is not seeking out anyone she knew, letting them come to her if they wish to.

She possesses superhuman reflexes and reaction times, which enable her to anticipate the trajectory of gunfire and energy weapons, as well as dodge oncoming melee attacks. She is slowly getting faster as time goes on.

It is hard to say just how this power works. She is there, yet she is not. She claims that she just fades off from the mind of the beholder. There have been reports that some believe there are latent psychic abilities within the stalker.

Before going on a mission, she coats her hand with different herbs and toxins. Passing it just before the face of another will make them have a brief bout of amnesia, forgetting what was going on. A sample was found, but researches forgot they were testing it and threw it away.

She finds her center in the mist of battle. Breathing and mediation come into play when she is working on building up. Again, there is rumors of psychic training that allows her to achieve this moment. It does not last long since it takes a lot of thought to keep it up for the stalker. 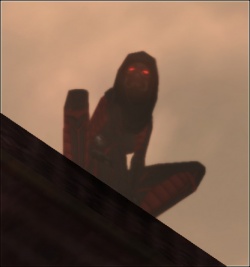 All that she knows is false...

-Out of Character information follows-

The real history of the one called Isolde Delarosa starts long ago. But we won’t go into her childhood or other things. That is for another time. For now, we will pick up her life around 1988. She was at the age of 36 when she joined up with Portal Corp. in helping map out the different worlds. She had been diagnosed with cancer and wanted to leave a mark on mankind before passing on. She was on the team that made first contact with the Rikti. Mind you, they were not warlike in the First Encounter. Against better judgment, she requested to say on with them as an ambassador. Portal Corp agreed. Yet with the fight between Freedom Phalanx and Amerika Korps destroyed the portal that connected her to Earth, shutting her off from home and Isolde found herself stranded in the Rikti home world.

During this time, she learned the truth of what the Rikti was. Humans that were now twisted into what we know now. Time passes differently, and over the next nineteen years, she would be subject to tortures and slowly changed into something more. The war on Earth was being planned and it is unsure what they had in mind for Isolde. They did not change her form other than ‘un-age’ her down to the age of seventeen. She is now forever trapped at that age since returning to Earth. When the first invasion happened, Isolde fought with the Rikti against Earth. Yet she did fall in battle and right into the arms of a Mu descent. Seeing what was in her mind and what had been changed, the person took her back to the isles. Under watchful eyes, her memories were suppressed one by one or removed completely. They fabricated a new memory to replace what was removed.

She was released to Isles with the thought that the sword she owned was magical and brought about her ‘powers’. In truth, her powers are her own and are slowly being woken up as time goes on. It is unsure just who the person that posed as her brother is since he is now gone from the Isles. This brings us to the present and the mystery that is Amour.