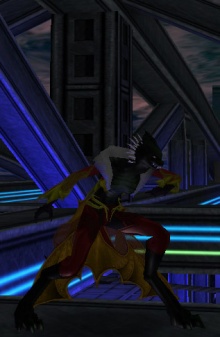 Not much is know about the creature who calls herself Anatari Ssalrisa. From the reports filed by the Longbow agents who first came in contact with her, deep in Primeva, she is clearly a creature of mutated origin. She appeared to prey upon the various combatants that littered the large island, striking as opportunity provided. From clothing and weapons to food and even the lives of those unfortunate enough to be caught unawares, the lizard-creature didn't seem to care what side of the conflict anyone was on. And it was also obvious that the lizards and serpents of the island were in on it. Evidence of victims leaned towards those killed being used for food while the armor they had been wearing was expertly removed and nowhere to be found. She was finally cornered and captured by Longbow and, to their surprise, discovered that she was more than just a 'big lizard'. Possessing human intelligence and similarity in form, she heaped abuse on their heads as she was secured and bound, leading several to wonder if she was a human who had mutated and found her way to the island. She didn't appear to know and was not the least bit interested in sharing the information with them even if she did. The clothing she was wearing had once belonged to a cabal member who had had the unfortunate experience of running into her alone and was never heard from again. Upon observing her they discovered she possessed sharp claws on finely formed hands, a nasty bite to match her disposition, and a large, sickle-shaped claw on each foot like that of the long-extinct velociraptor. Some muttered about scientific experimentation as her origin but it could not be confirmed. In the end, no one could figure the creature out. The first evening after having captured her, the camp was harassed by snakes and other lizards with two of the members bitten by venomous snakes requiring emergency treatment, leading the Longbow to believe that their prisoner could either control or communicate with them and forcing them to pick up and leave the forested area back to their ship for transport back to Agincourt.

A decision was made among the Longbow at Agincourt to consider the creature a villain and ship her off to the Zig. She was, obviously, very intelligent and was fully aware of her actions. To make matters even more confusing to them, a captured smuggler recognized her and informed them that she had provided him with weapons, armor and supplies for his smuggling operation with payments being wired to an account. Evidently the creature was MUCH smarter than the Longbow had realized and had been preying on the combatants on Primeva for this reason. When confronted with the information, she simply stuck her nose in the air and refused to say anything. She only provided a name when she was being processed at the Zig. Even though the Longbow have been researching it, they have been unable to track down any other information or the bank account and funds which they had intended to confiscate.

Life in the Zig

Anatari was tiny but vicious and had to be continually monitored. Her sour attitude and disregard for the lives of others proved to be a strain on the facility. She killed and partially ate her first cellmate, nearly killed and horribly scarred a Troll who attempted to 'teach her a lesson' after, and slit open a guard's belly in a single kick, all while supposedly sedated to restrict her powers. The only solution was to permanently keep her in solitary confinement and away from the rest of the general population. Due to her nature, it was always a process to move her or search her cell, causing the guards to have to wear protective armor, subdue and bind her to keep her deadly kicks and vicious teeth at bay. For all of her smuggling sophistication, she still behaved like a cold-blooded animal whenever it suited her. Even from Solitary, Anatari somehow managed to insert herself into the smuggling operations that ran through the Zig and became known for being able to supply even the most outlandish of requests for strange payments and dangerous IOU's. She didn't care who wanted it and never asked why.

When an Arachnos team broke into the Zig and extracted her, she listened to their reasons, laughed and promptly vanished from under their noses. She has no intention of being anyone's "Destined One", lest of all some warm-blooded fools. 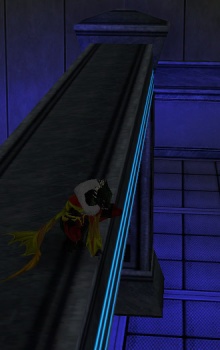 Anatari has set herself back up as a mercenary and general 'acquirer' for those willing to pay. She tends to lurk in Pocket D, listening for information and stalking interesting individuals for her own purposes. Her tendency to dart from place to place and remain in the rafters means she is rarely noticed unless she decides to make herself known. She tends to be jumpy and will scurry away if startled.

Anatari is cold, harsh, and flat out doesn't care about pretty much anyone else. She is out for herself, first and foremost, and sees no reason to change that fact. She is cold-blooded in reality and is perfectly happy to carry that over into her attitude as well. She can be helpful, if she has a reason to be, but rarely does anything for free. A true merc at heart, she'll do about anything if the pay is right. She is not above vengeance when slighted and has the cold patience of a snake, willing to wait until the situation is just right to strike back. Her sense of humor is often a bit on the sharp side for most people.

The one thing she finds absolutely hilarious is the few times a 'warmie'(warm-blooded, what she often calls humans or near-humans) has attempted to flirt or show sexual interest in her. She has shown no interest in warmies... they're food, work, or both.

Aside from her natural weapons of teeth and claws, Anatari is a skilled shadow controller. She takes a savage pleasure in wrapping her enemies within its dark embrace and leeching their lives away, knowing that the terror most sapient creatures have of the dark. Due to her tiny size and strength, Anatari often is forced to work with others on larger jobs and utilizes her manipulative nature, stealing her enemies' energy to assist her companions in various ways.