In the most remote part of space sits a small blue-green planet called Rinegu, on which sits a small island country named Eraknivan, which serves as the cultural and political center for the entire planet. When asked about their species, the sentient inhabitants answer "uhizna". Their nationality--indeed, their self-definition--is "Eraknian".

An enigmatic and trend-upsetting species of extraterrestrials, the Eraknians are peaceful and contemplative. By nature, they are compelled to be curious, and most of their stunning scientific breakthroughs were developed merely by a simple "What if...?" Despite their technical prowess, though, Eraknians are prone to living simple and naturalistic lifestyles. Many would prefer to sit quietly outdoors, enjoying a gentle breeze and a nice cup of kirn (an Eraknian variety of tea).

Physically, uhizna are very similar to humans. They too are bipedal mammals... In fact, uhizna and humans are indistinguishable from a distance. At a closer look, the uhizna are recognizable as digitigrades--that is to say, they walk on their toes like dogs and cats, instead of flat feet like humans and apes. Less discernable differences include a vast improvement in eyesight and hearing, increased reflexes and flexibility, a lower body temperature (up to 10°F cooler), and a superior immune system. Most other features are virtually identical, such as ten fingers, two eyes, nose, etc.

In the not-too-distant future, Eraknian scientists make two startling discoveries: the ability to burrow through space to quickly bridge two points... and another life-supporting planet. Ecstatic at the possibilities and overwhelmed with curiosity, the Eraknian government quickly dispatches an exploratory mission, equipped with the newly-developed Tunnel-projector.

The new planet is cautious at first, almost fearful, but contact is made nevertheless, and so begins the peaceful relations between Rinegu and Earth.

Unbeknownst to humans and uhizna alike, the Tunnel-projector is more complicated than it seemed. While it is commonly believed to dig through hyperspace to connect two distant points of the universe, many philosophers and physicists begin to grow doubtful. There are too many coincidences between the worlds, they say. In reality, the projectors do not merely connect points in the universe, they connect points between universes. Rinegu is in actuality an alternate-dimension version of Earth, complete with matching ecologies,geographies, and even natural history to an extent. There is even evidence comparable to divergent evolution in some cases, suggesting that both planets were once perfectly aligned in their respective universes.

One of the early integration attempts between Eraknivan and Earth is a student exchange program. It is this program that sparks the meeting of the American Nero Fleming, and the Eraknian Kirya Onikija. The two become fast friends for many years before eventually settling down together and starting a family. This in and of itself is considered a major scientific breakthrough, as no one previously knew if humans and uhizna are genetically compatible. This serves to further the study of Rinegu/Earth biology.

As it is, the Flemings are given two perfectly-healthy children. Twins, in fact, to be named Andrew and Anlye. Physiologically, the children mostly appear human in way of posture and body shape, but still display the uhizna healing factor, vision, and agility. One trait that seems independant from either gene pool is the twins' eye color: a bright, shiny gold color, often compared to a gold coin. When the fame and attention finally begins to die back, the Flemings hope to enjoy some manner of normalcy.

Until one day, and a tragic traffic accident. Though Kirya manages to save Andrew and Anlye from an out-of-control truck, she fails to save herself, and is killed on the spot. Wracked by grief, Nero withdraws psychologically and physically, taking the remainder of his family and moving to a secluded area of Eraknivan. While his children manage to build a life for themselves, Nero continues to be an empty shell of a man for decades.

"Of course I had a rough childhood. It wasn't easy winning everything...."

In her teen years, Anlye was always competitive. She would never hesitate to show off her considerable skills in horsemanship, gymnastics, and Eraknian sword fighting. Even with her brother, who was more of a reserved intellectual, Anlye would attempt to instigate some form of competition. Though he never took the bait, Anlye still regularily claimed victory over him. 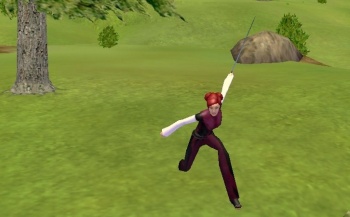 While their father had retreated from the world, he still maintained expectations of excellence for his children. Andrew was by far the more intelligent of the two, but he was just as prone to daydreaming and philosophy, to the neglect of his studies. Because Anlye viewed school as just another competition, she would more often than not excel where Andrew would fail, earning Nero’s praise for herself and Nero’s scorn for her brother.

And then, Anlye was finally defeated. Commonplace in preparatory schools in Eraknivan is the practice of sword dueling. Not with real swords, but with wooden training swords called genare. Anlye’s reputation as reigning school champion seemed unshakeable until she was challenged by one of Andrew’s closest friends, a human named Marcus LeRusé. Marcus had previously held a different schoolwide reputation: that of an underachiever and goof-off. Thus, a challenge to the top fighter in school was a shock to everyone. But that was nothing compared to the reaction following his victory. For days after, everyone spectator to the historic event was sure they had dreamed it. At first Anlye was mortified at her self-perceived failure. Marcus later met with her and shared the secret of his success.

The two first met years ago, indirectly, through Andrew. Anlye had shrugged him off as “just another lazy human”, but Marcus was fascinated. There was something about her, he later admitted, that he could not avoid, “and it’s not just the left upslash.” While Andrew continued to attend Anlye’s matches out of familial duty, Marcus began to study Anlye’s techniques. Combining these new tactics with his traditional Earth-fencing education (which he had kept a close secret), Marcus managed to disarm Anlye, both in a genare match and in life.

This singular experience forced a new change in Anlye. In combat, she became more unpredictable and unyielding than ever. But outside of the sparring circle, her personality softened and grew more empathetic, particularily to Marcus. In later years, she would even accept his proposal for marriage.

"Enemies? An enemy is an opponent who hasn't been defeated yet...." 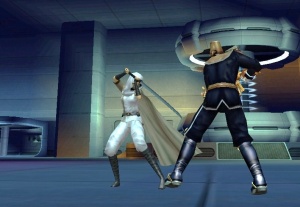 After graduation, Anlye enlisted in the Noeguré Corps, the nearest Eraknian equivalent to police officers. Ironically, while her skills allowed her to climb rank at breakneck speed, her promotions pulled her farther and farther from fieldwork, thus preventing her from further utilizing her talents. Fortunately, her skills and successes did not go unnoticed.

In Eraknivan, one of the highest honors an individual can ever hope to achieve is to be selected as an Imperial Guard, better known as an Avawin. The Avawin Corps is known for its supreme authority over the military, and is said to be so exclusive that they refuse any and all applications. New recruits are actively selected and located by the Corps itself.

Such was the case with Anlye, by now surnamed LeRusé. To her and her family’s great delight, she was contacted and asked to apply for an evaluation, which she passed handily.

The Avawin training proved to be the first real test Anlye had yet faced. Even with her existing abilities, she found herself constantly challenged by the new techniques and tactics. Where her fellow recruits faltered, Anlye quickly found the solution. She proved to be as adaptable and cunning as the Corp expected from its members. Anlye was finally initiated as a full Avawin soldier.

As Avawin, Anlye’s reputation grew further. She was the hero of the Battle of Ohiro Valley, and served as a commander in several high-orbit conflicts. To better continue her triumphs, she was granted a flagship, which she named The Ryoreg after the horse her family had in her childhood. Her war status even included a successful campaign to defend an ally planet from invasion. Unfortunately, the success wasn’t to last. 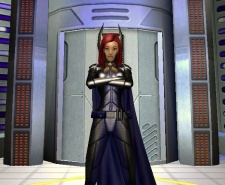 The trouble with burrowing through space, as with Tunnel-projectors, is that if the slightest mishap occurrs, the results can be erratic and disastrous. On the return voyage from her interstellar victory, the projector aboard The Ryoreg suffered a malfunction, forcing an emergency exit to normal space. When the malfunction spread, Anlye had no choice but to take her crew and soldiers and abandon the ship.

When The Ryoreg succumbed to the damage and imploded on itself, Anlye was separated from her crew. As luck would have it, Anlye’s shuttle stumbled onto a friendly planet, the familiar world known as Earth.

Anlye landed her craft and quickly discovered good news and bad. The goods news was that this planet was indeed Earth. However, The Ryoreg's projector malfunction ejected the ship into a universe fifty years in the past. There was no contact with Rinegu, no person on Earth capable of building a Tunnel-projector, and no way to return home.

Fortunately for the shipwrecked Anlye, Earth of this time was no stranger to alien life. In particular, one major region was home to hundreds of alien species, among other oddities. For the time being, Anlye resigned herself to settle down in Paragon City and await some form of communication from her husband, her family, or her homeworld.

Extended contact with Anlye reveals several facets of her persona, some of which conflict heavily with eachother.

Though she would never admit it, Anlye is far from infallible. She does occasionally make mistakes, and the last person she’ll ever forgive is herself. While she is indeed a capable warrior, any errors she makes will increase exponentially during the course of a battle.

Like most Eraknians, Anlye is vulnerable to loud and unexpected sounds, especially of a higher pitch. Though hardly a disability, it nonetheless provides an unwelcome distraction to the heat of battle.

Also like most Eraknians, Anlye has an irrational fear of deep water. However, this fear is magnified in her mind by a childhood near-drowning accident. Even if it proves to be impractical, she will purposefully avoid contact with large bodies of water. (e.g. lakes, seas, wide rivers, etc.)