Antitype wound up in the Etoile Islands as a result of desperation and luck, and has been trying to find her place since. While hardly villainous in the traditional sense, she fits well into the often cutthroat environment in which she finds herself. Detached, calculating, and utterly confident in her own abilities, Antitype carves out a new life for herself one day at a time in her new home.

Antitype was born into a parallel world, one where Lord Recluse turned his personal army on to war-weary Britain following the Second World War. Preaching a doctrine of a strict, unified organization, Recluse and Arachnos swarmed over the island, capturing Ireland, Scotland and England herself within a year. Once dug in, the Spiders spread a web of vast industrial complexes and factories to feed their war machine over the country. Totalitarian rule was instituted with Lord Recluse as Emperor, and the once great British Empire fell once and for all.

Antitype was born Kellene Laurel Hollister in the village of Alnwick in northern England, to parents Sebastian and Elizabeth Hollister. Elizabeth died four years later while giving birth to another daughter, Sarah Ivy. Sebastian continued work as a technician for a local Arachnos training and research facility, while his daughters learned at one of the several massive boarding schools that dotted the country. At age 16, both Kellene and her sister Sarah (then aged 12) were drafted into Arachnos service. Kellene, by virtue of her Mu ancestry, and Sarah, due to her suppressed psychic abilities, were taken from their home to be trained as Arachnos soldiers.

Upon their separation, Kellene promised Sarah that they'd find a way to escape together some day. They were quickly sent to different facilities and had all communication between them cut off. Sent to a re-education center, Kellene found herself the subject of beatings and torture, along with her other recruits, to indoctrinate them into the growing Arachnos Army, which sought to keep its soldiers in line via fear and punishment. Despite her resistance, Kellene quickly adapted to military life. She trained in martial techniques alongside her lessons in mastering the Mu energies which were her birthright; all the while, however, she sought an escape.

Her prowess in summoning rituals led her to an apprenticeship underneath a prominent Mu mystic, who taught her much in regards to opening portals to different planes and realities. A quick study, Kellene quickly mastered rituals several circles beyond her peers. She had also been covertly opening portals late at night to try to find her sister, Sarah, in hopes of using her newfound abilities to secure them both an escape. She'd heard her instructor speak of a method of opening several portals in rapid succession to jump into one area, then out into another as a means of quickly accomplishing deliveries throughout the military base. When she was forbidden to learn this technique, she snuck into her instructor's laboratory late at night to steal his grimoire and teach it to herself.

Kellene found her instructor's book nearly illegible. Thinking she'd found the correct incantation, she accidentally opened a portal to one of the infernal planes. A demon stepped out and, since she hadn't taken care to draw wards around the portal, was free to do as it wished. The demon, driven by its lust for chaos, possessed her body, assuming control of her mind and abilities. Her fingers drew out into sharp claws, her teeth became jagged and shark-like. A tail grew from her back and her irises vanished, leaving her eyes a blank white. She was possessed of only one desire: to destroy. In the ensuing rampage, twelve Arachnos soldiers were killed, including Kellene's instructor. 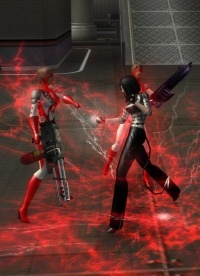 Antitype takes on some Longbow

After being subdued and chained down to a ritual altar, A circle of Arachnos sorcerers exorcised the demon from Kellene's body and banished it back to its home plane. The changes to her body remained however. She was then brought to a trial at the feet of Lord Recluse himself. It was decreed that her actions had made her into a traitor to the organization; her theft of her teacher's grimoire undermined the principle of solidarity and obedience that drove Recluse's war machine. A branding iron was pressed into her right cheek, forever leaving her with the symbol of Arachnos seared into her flesh; the mark of a traitor in her world. Kellene was sentenced to one year of imprisonment and torture, following which she was to be publicly executed as an example to the rest of any dissenters among Recluse's subjects.

Her punishment was brutal. Kellene was repeatedly beaten and tortured, just as was promised. Her skin became a patchwork of scars, her right eye had been destroyed and removed, leaving her face further marred. She was, however, feeling her power grow. The demon's presence had increased her power, and it stirred within her now. Her time was also running out. On the eve of her execution, the pain of her beaten and abused body drove her rage, and she unleashed her abilities on her captors. She easily overpowered the guards, escaping into the base in search of any information on her lost sister. Her quick search uncovered Sarah's location. It seemed she'd been selected to put her now considerable psychic abilities to the ultimate service of Arachnos. She'd been conditioned and sealed into a Tarantula Queen. Knowing there was no reversal for this process, Kellene took the only action remaining to her. She fought her way to her former instructor's chambers, and opened a portal to anywhere, preferring to take her chances and perhaps start over. 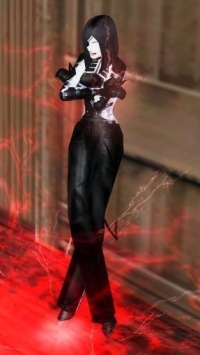 Antitype in her usual posture

She landed in the Etoile Isles, and quickly adapted to the muscle for hire tasks which only too many people were happy to give. She has since refined her ability enough to stand on her own two feet, and has even overcome Lord Recluse himself (albeit in a future timeline that will never come). Kellene, trading under the name Antitype, has earned herself a little distance to look back over what she's done, and what the future has to offer.

Antitype is a tall woman, leanly muscled. She has longer than normal fingers, ending in sharp claws. Her teeth are slightly serrated, though this is indiscernible unless very nearby. Kellene sports a black, leathery tail ending with a white spade; she becomes rapidly annoyed if anyone tries to touch it. Her tail is prehensile, but not strong enough to lift anything more than a few pounds. Her remaining eye is a bright white throughout, with no visible iris or pupil. Her face is marred by a large Arachnos logo branded into her right cheek, as well as an eyepatch over her right eye. Kellene does her best to hide or downplay these flaws, as well as the other changes her body has undergone. She often dresses in leather attire, or lacking that, a business suit. She has a fondness for heeled footwear.

Antitype isn't especially outgoing, and tends to watch crowds and situations with a detached smirk. She speaks quietly, with a refined, upper-class British accent that belies her appearance. She tends to speak deliberately as not to cut her tongue on her sharp teeth. Given of a pragmatic outlook, Antitype rarely acts out of the kindness of her heart unless it's to aid someone she considers a friend. She places no special value on human (or inhuman) life, and while she isn't malicious, if people have to die for a goal to be achieved, so be it. Though she has few, she is fiercely loyal to her friends, and has no compunction with throwing herself in harm's way for them. She can be confrontational when she views someone as foolish or annoying, and will throw out verbal barbs at the object of her ire. Though it rarely comes to blows, she is rarely unwilling to back up her words with fisticuffs.

Though Kellene is a bit of a lone wolf, she does associate with a few people on a regular basis. She's been known to work with The Hydrophidian, The Necrophidian, Soviet Shadow, Kalos Eidos, The Wild Muse, and Rua Bas on occasion. She does seem to have a soft spot for The Hydrophidian, and often goes out of her way to assist her in whatever she may be up to.