Banshee Bride is created by Poul Piepgrass. Contact ingame is possible by using @Piepgrass. Feel free to leave a comment in my Discuss this page area if you have any constructive criticism of the page :)

Banshee Bride is a member of the criminal organization Rogues Gallery. When Mindswipe excavated part of Warehouse 13 he stumbled upon a ancient church, which incidentally was the chosen haunt of Malienda. Bargains were struck between them and Malienda now aids the organization. What she gains from the bargain is not disclosed.

Malienda Wighton is the ghost of a former British noblewoman. As such she has a tendency to look down upon those she deem of lower status and heritage. Her manners is court and correct. A combination of 400 years of being a banshee, uncountable lives taken and the knowledges that she cant find redemption has left her slightly mad. She is ruthless and doe snot care for human life as she once did. In life she was a devoted catholic, but her devotion has been shattered by her fall from heaven and what she perceives as the cruelty of God for not having a way to redemption.

As a Banshee Malienda has the fabled deadly scream of vengeful spirits. Her scream is not only audible but also has a physical presence as well as manifesting on the ethereal plane. This means that very few means of protection from her scream is possible. Beeswax in the ears will help to a degree, but the battering of the scream as well as the spiritual part of it will still take hold.

Malienda treasure shadows and claim to be able to talk with them. Whether this is a manifestation of her madness or true is not known. Either way she has control over them in a manner of ways: If her name is spoken in a dark place she will know it and be able to hear the conversation. Shadows are able to locate her allies and can bring them to her in a manner that works like teleportation. In combat shadows and darkness will cling to her foes, obscure their vision, hinder movement and leave them vulnerable to attacks. The combination of this often leave enemies trembling or even paralyzed in fear.

Malienda feeds upon the soul´s and spirit of living creatures. As such she consumes part of her victims spirit when defeating them. If the defeat results in death this means that the entire soul is consumed. Apart from sustaining her she can manipulate the energies in several ways: Life-energy can be restored to heal allies and herself alike. Spiritual energy can be drained from enemies and substantial enhance the damage her scream causes. Souls can be bound to do her bidding in several ways. Her husbands soul is bound in this way and is forced to obey her as a vengeful spirit. Other less personal spirits are occasional summoned to harass and paralyze her enemies.

Via tremendous willpower Malienda is able to manifest herself as a corporal presence. This enable her to touch and manipulate items in the physical world. She doesn't do this often due to the tremendous concentration it requires.

Malienda is always flying or hovering. She never sets her ethereal feet upon the ground.

By using her control over shadows Malienda can enter a dark place and exit in another dark area. This is the same ability that she uses to call allies to her side.

Malienda´s prime vulnerability comes from spiritual and holy energies. As such priests with a strong faith, spiritmancers and other mystics are her most dangerous foes. Artifacts that harm insubstantial creatures are extremely painful for her and the staggering amount of Axes that has filled the Rogue Islands are a point of strong concern to her. She claims that she is immortal but can be caused pain. When faced with to much pain to absorb she will fall into a unconscious state, become entirely insubstantial and invisible and awaken some time later in her haunt. She describes this as a harrowing. The amount of time the harrowing takes depends on how grievous the pain of her banishment was. Apart from this she appears to be immortal.

She grows in power with each soul she consumes, and as of yet has not peaked in her powerlevel. Malienda believes that consuming enough souls will eventually grant her power to rival or even surpase the might of God. Rumors claim that she will use such staggering power to end her own existence and once again achive tranquility.

Malienda was noble born and married another nobility at the age of 19. Her husband Alfred Wighton inherited the title Duke of the Isle of Wight and assumed lordship over the isle in 1581. Malienda was the love of his life and they lived a blessed life as nobles with a wealthy estate. Malienda eventually became pregnant, and Alfred's affection to her became even more profound in the knowledge that she would provide him with a heir. Disaster struck during the birth and Malienda died in labor. Before she expired Alfred swore a solemn oath in the name of the Lord to always love her. With her dying breath Malienda managed to give life to her son Alexander Maximillian Wighton.

Malienda had lived a devoted life as a catholic. After he death she went to heaven and has described it as a state of tranquility. She was contend happy and at times had glimpses of her loved ones. This changed a little less than a year after her untimely demise. Alfred was seduced by a maid of his household and married her. This infuriated Malienda and also offended the Lord in whose name he had sworn a oath. Thus Malienda was sent to earth to punish his falsehood. This became her doom.

Malienda unleashed her wrath upon her unfaithful husband. Her scream pierced his eardrums, shattered his heath and left him dying in pain. After this Malienda doomed herself. Enraged by the boldness of a lowly maid who had seduced her husband she exacted her vengeance and killed the maid in the same fashion. As she performed this horrid deed she felt terrible pain course through her form. As she writhed in pain darkness wrapped around her and she heard a voice: You have failed. Your anger misled you and you must now face the consequences. After this she fainted. When she awoke she found her self in a ancient cemetery, incorporeal, gaunt and terribly terribly hungry.

Malienda was cursed to become banshee, a vengeful spirit of the night. For centuries Malienda searched for a release for her condition. All she wished for was to return to the tranquility of the afterlife. She searched for many years on a hopeless quest. In her desperation she consulted mystics, mages, charlatans, psychics and daemonic entities. Some abused her for own gain, some lied to her and some simply ignored her plea´s for help. None gave her the release she needed. And in all the years she constantly felt a great hunger, a hunger that was only sated momentarily by the release of energy from defeated creatures. A nonfatal defeat meant a shorter reprieve than a fatal one. So Malieanda started to kill criminals and men of evil, consuming their souls to keep the hunger and pain away. After almost 400 years desperation led her to the Rouge Isles. Finding refugee in a ancient abandoned church she set out to gain the help of Arachnos mystics and eventually the patronage of Ghost Widow. After almost 2 years she found the answer to her quest. In order to once again find release she has to find the soul of the innocent maid she killed, ask her forgiveness and have it granted. A quest that appears all but impossible: Find the soul of a maid, whom she does not know the name of, whom she killed 400 years ago and have her forgiveness. This discovery broke Malienda as well as her sanity. She has forsaken God and now punishes his creatures in all ways possible.

Malienda is originally from a Praetorian Earth. She doesn't know that though and will probably not realize it. It is almost a identical version of this earth and the small differences she writes off as the change of centuries.

The abandoned church Malieda uses as a haunt, houses another powerful entity. One that she at times think she can hear during her harrowing.

Her former husband is bound to her will and serve her in combat. He is a unwilling slave though and will only aid her for minutes at a time, unless she focuses on keeping him around. He refuses to speak to her.

When spending time in her haunt the hunger she feels at all times are easier to tolerate. Malienda does not know why. 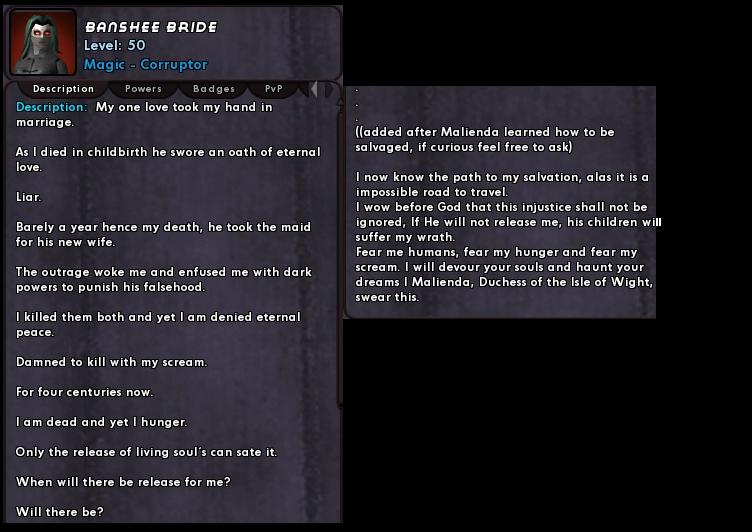