At the time, Earth was a utopia for all life. There was no violence, crime, or corruption, and humanity had existed without flaw. Then the Mist appeared. With the Mist came Loss, and with Loss came Corruption. Resources dwindled and the perfect society of the world would begin to fall apart. Men sought what they didn't have, resorting to thievery. They would take from one another to get what they needed to survive. Man would hoard all that they could, even going so far as to spill the blood of others to take more for themselves. Men became monsters, maddened by the Earth's desolation.

While the rest of the world had been consumed by the Mist, the village Eden remained the only haven. A place of prosperity--a place unspoiled by the corruption just outside its walls. Life for those in Eden was peaceful, and though told stories of the Mist, its children remained naive of the true evil that lied just beyond the city walls. The peace in Eden was kept so long as its guardians, the paladins, remained vigilant, holding the monsters of the Mist at bay. Still, there were those paladins who desired to end the Mist altogether. These rare few would form bands, leaving the safety of Eden with the intent of returning peace to the Earth.

Lance, born in Eden, spent the earlier years of his life alongside his childhood friend, Anna. The two were inseparable, a pair at constant play, and spent most of their time pretending to be paladins, fighting imaginary creatures and "protecting the city." As the two grew older, they would only grow closer--even to the point of where an adolescent Lance began to desire Anna as not only a friend, but a companion as well. Despite this, those feelings were kept to himself. After all, some things were better left unsaid. It was then that Lance, now age 14, enlisted within the paladins like so many other boys his age. He would live out his childhood fantasies--though there was more to it than that. As some unneeded, personal task of proving to himself that he was worthy of Anna's hand, Lance joined a group of Eden's finest paladins to venture into the Mist and eliminate the source of corruption in the land.

Lance had yet to tell Anna of his decision to leave Eden, and it wasn't until the very morning of his departure that he chose to do so. After a long goodbye, and one final, heartfelt embrace, Lance left Anna in tears as he departed with his fellow paladins, into the Mist. For weeks and months the group of adventurers would travel, sometimes going days on end without food. They survived on what little sustenance they could find from the Earth's remaining resources, and from the wreckage of devastated towns. Countless monsters were slain at the hands of Lance Asheford and his fellow paladins, and yet the Mist would remain. The group persisted after an unattainable goal, to the point of where multiple lives were claimed-- either by the hands of monsters, starvation, or by the blades of their own comrades as they had fallen to the corruption of the Mist. 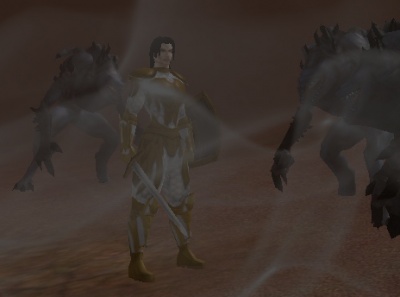 Six years had passed before the group finally returned to Eden, their task unsuccessful. Still, they would bring with them what little they had managed to scavenge from the other wrecked cities. The additional resources were a welcome sight for the citizens of Eden to behold, but even moreso, the survival of the band of paladins. As the group of remaining heroes entered the gates, cheers could be heard throughout the city for their safe return. Despite the laughter, the cheering, and the smiling faces, there was one thing that caused Lance to ignore everything else. There stood Anna, now a grown woman and the definition of beauty--in the arms of another man, and cradled in her own arms, a sleeping, infant child. Lance was heartbroken and in disbelief of such a sight. His reluctance to reveal his feelings resulted in what he felt to be the loss of the best thing he ever had.

Lance Asheford, sword in hand, left Eden the very night of the day of his return. Stricken with grief and confusion, he wandered the Mist in the night, bringing a quick end to whatever creature happened to cross his path. For days he would walk--tired, wounded, and starving until ultimately, he collapsed in an armored heap on the ground. He would beat armored fists into the soil, crying out in despair, begging for it all to end. It was then that he felt the chilling, yet comforting embrace of another, the hissing whisper of a thousand voices. These voices would soothe a weary Lance in his time of need. They gave him strength, and one phrase couldn't be forgotten; "Nothing you heal until you forget how to feel."

It was with those words that Lance forced himself to continue. His heart grew colder and the weight of the world seemed to grow lighter. Loss of care resulted in a loss of burden. As he continued his travels, he wandered aimlessly about the Mist, guided only by that soft whispering in his head. This whispering which would beckon him further and further still from Eden until a now tireless Lance came upon the wreckage of a now-ruined holy city. As he explored this city, the voices would only grow louder, and louder still. Ultimately, Lance stumbled upon a pile of rubble, those "whispering" voices now practically deafening. Digging through the wreckage, the, the hilt of a weapon was eventually revealed. Lance pried the wretched thing from the ground, the black, bloodstained blade held triumphantly in hand. The voices were silenced. 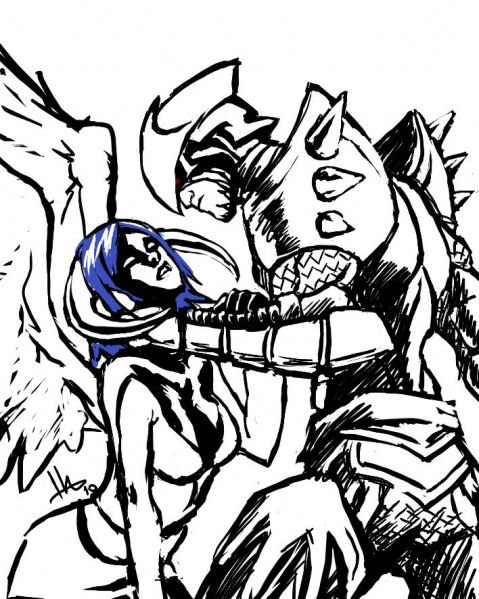