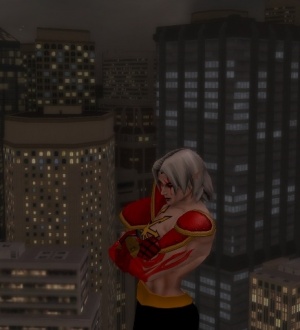 A refugee from another world, little is known about Bloodblade except that he somehow appeared in Praetoria only recently. He was later discovered to have fallen in with the Crusaders, a sub-faction within the Resistance who believes the end justifies the means.

Bloodblade's skills and his ruthlessness made him the perfect new recruit for the Cruaders and he soon became part of the team known as the Powerbreakers. An elite unit formed to hunt down the Cole's Powers Division by using any means necessary.

Bloodblade reveled in his work, the stalking & the chase, the hunt which finally lead up to the kill itself. The act of toppling those in power and look on the faces of those he humbled brought him great satisfaction. He didn't care about the Resistance's goals or the collateral damages he caused. Although it seems like there is more to Bloodblade than just spreading chaos, only time will ultimately reveal his goals.

The one thing that was clear was that Bloodblade is certainly no human being. Below are the list of special powers he possess. It is unknown if these powers are innate to all members of his species or if he acquired them through some means.

Possessing superior vision, Bloodblade is able to see perfectly clear in extremely low-light conditions. This allows him to move at ease in darkness while others struggle to find their way around.

Bloodblade also possesses the ability to blend into the shadows, although not completely invisible he is able to slip past most security right under their noses.

The extent of his magical abilities are unknown though it is observed that Bloodblade is able to teleport short distances and conjure light using only single syllabus verbal commands.

Surpassing the reflexes of a train gymnast, Bloodblade possess the speed and balance to weave in and out of battle. Leaving his assailants attacking the empty space where he once stood.

A natural sleight of hand and possessing superior hand-eye coordination. Bloodblade is an expert with bladed weapons, his attacks are lightning fast and precise. The flurry of flashing steel often leaves his targets confused and opened to his relentless assaults.

Bloodblade possess vast knowledge of the humaniod anatomy right down to even the most minute details. The pulses, body movement & breathing rhythm. He knows exactly when and where to strike to cause the most traumatic damage.

Sharp and balanced. The pair of blades are well-crafted but nothing extraordinary sets them apart from most other bladed weapons.

Bloodblade's armor consisting only of Spaulders, Gauntlets and Sabatons offers limited protection capable of withstanding only glancing blows. It seems intentionally designed not to encumber the wearer.