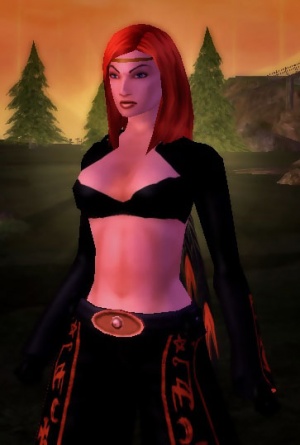 I am the phoenix bearer, born into this world at the epoch of the first generation of civilization. I was born in a beautiful city in a place time has forgotten but that has not forgotten time. The weight of generations weighs heavily on my shoulders.

I fight an endless battle, estranged, a lone warrior, carefully teetering on the edge of my own plummet into the pit. Thus far the creators have smiled their well wishes upon me....

I live in the shadows, a hunter, a plague on the evils of this world, I know not of remorse, mercy, or compassion.

Many think they know me.

Few have even had a glimpse...

And Time Marched Ever Onwards

Callista Roase - photo manipulation by Ran Kailie( Original)
Over the centuries, many civilizations have written of their experiences with the mysterious and beautiful woman with flame red hair and a fiery attitude. They spoke of her prowess on the battlefield, of her ability to bring victory in even the most dire of situations. Bards have sung tales of her beauty, and of the lingering sadness in her eyes.

Throughout the ages her names have been many, some have been lost to time others continue even today as myths. She has been known as the Morrighan to the Celts, Enyo to the Greeks, Brynhildr to the Norse and Bellona to the Romans. Worshiped as a goddess, reviled as a demon, and revered by warriors for her martial skill in battle, she has carved large swaths of destruction through entire battlefields. Like a warrior goddess she leaves ruin in her wake and often turning the tide of great wars once thought lost.

It was during World War 2 that she became more than simple a myth whispered by the poor in third world counties. Seeing the horror wroth at the ends of the Axis, and bearing memories of the devastation of the first World War, she dedicated herself to aiding the allies in their fight. Fighting primarily alongside the Europeans and the Dawn Patrol, she avoided the heroes of America. She quickly became the hero of the infantry, often trekking on foot with them over long expanses of terrain. 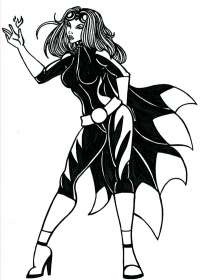 Callista Roase drawn by Ebony-Chan (Original Artwork)
Callista, known for her no-nonsense attitude and love of a good bar brawl, she was rumored to have beaten Statesman himself in a pub brawl. A popular story told by infantry men Statesmen denies the rumor and Callista refuses to verify it either way.

As the war ended she faded mostly into obscurity, appearing as needed in various world conflicts and aiding the United Nations with peacekeeping tasks. While she was never an official member of the Dawn Patrol she was often seen in the company of many of its most influential members including Hero One and his successor Hero 1.

However as the Rikti War started she moved quickly to join the UN's newest creation, Vanguard. Originally slated as part of the original Omega Team, tasked and led by Hero 1 in a risky strike on the Rikti home world, the rumor stands that a last minute decision had her moved to Alpha team. Her affinity for magic, and ability to weather almost anything made her a perfect candidate for Omega Teams roster, and her objections to the move were loud.

It was a heated argument between her and Hero 1 that ended with her storming out of the command center. Rumors had circulated for years of a relationship between the two, rumors that were never substantiated. What is known is that after the explosion of the portal and the loss of all but one of the member of Omega team she went back into seclusion, only re-emerging as the rumors began to circulate that the Rikti were preparing for another fight.

A Warrior - An Unstoppable Force

All who have tried to identify the source of her unstoppable and frightening power have met with frustration and failure. Her ability to survive even the worst of attacks, and her nigh invulnerable nature combined with her impressive willpower and elemental magic make her a formidable foe.

More then a few who have researched her over the centuries has surmised that her powers might derive from a deity or divine source. Many have also surmised that she is potentially a goddess confined here on earth as a penance. But whatever the reason it is known she has been here since the earliest recordings of Sumer and tribal tales speak of her well beyond written time. 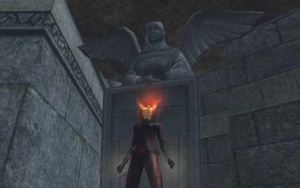 Phenixel's Rage.
Swordsman - Renown as a swords-woman with frightening skill and dexterity, her fighting skill has been called a deadly and beautiful dance able to captive its victim. Equally deadly with one or two swords of any type, her preference mostly recently seems to be for a pair of Indian talwars.

Elemental Magic - While its unknown how she manages to manipulate the elements, M.A.G.I. has classified her as a inherent user of magic skill of an unknown origin. She primarily wields the fire and air elements to create infernos, painfully hot flames, and incinerating fire. She has also developed the ability to form the fire into a tangible sword.

Strength of Will - Whether its her impressive will, or something else, what is known is that she is much stronger then a normal human, and well beyond that of even the most trained athlete. Her ability to walk through even the most horrifying battle scenes unmarred have given rise to her being a battle goddess, a Valkyrie, and the very visage of death. 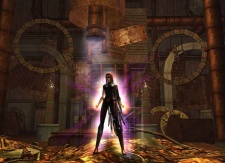 In the lair of the clockwork king.
Fiery temper, quick wit, and tongue as sharp as a razor blade she is bluntly honest and has lived to long to care enough play games with people. She takes what she wants, states what she feels, and generally tries to live a day at a time and enjoy what she can.

But she has a darker side, the side she does a good job of keeping under wraps, her anger, and temper.

Visage of A Goddess

Callista has a sort of ethereal almost old world and untouchable beauty. Her skin is a warm touchable golden tone, filled with warmth, her hair is reddish orange and almost seems to look like fire. Her features are of a unidentifiable ethnic type, and her eyes are a startling emerald green. Her figure isn't the lithe, almost painful thin that is currently in vogue, instead she has more of a strong womanly figure, she has curves and plenty of power in her figure.