Prodigy of the Ex Machina family of mad scientists, Chaos is an expert in robotics and chaotic technology. She has even mastered the pinnacle of chaos science, the plot hole, which she can use to heal and debuff.

Chaos is a native of an island chain known only as the Ex Machina Isles. Certainly other families must live there, but that is the pseudonym she uses, and she has never told anyone their official name, if they have one. She speaks with an accent "not quite American" and has said that the islands are in the Pacific. The society has extremely lax laws, particularly on social mores (if they have any) and the types of science that members can research.

It is suspected that the population of the isles is very small. Chaos is intimidated by crowds and social situations and dosn't pick up on cultural cues.

The schools teach mad science quite extensively. Chaos has already built robots herself and manipulated plot holes. She often describes her excursion to Paragon as a "field trip" and claims to be studying supers for "extra credit."

Chaos went to Paragon to research the odd goings on in the metropolis. She has a strong belief in individual freedom and fought some of the more heinous villains, but due to her hatred of authority, refused to register as one of Paragon's hero lackies. The heroes overlooked this, but as she performed more and more dangerous experiments, she was labeled a villain and arrested. Not wanting to bring the wrath of Longbow and Paragon, the ex machinas broke her out by hacking arachnos records so that the fools would believe her to be a destined one.

The Rogue Isles were even more suitable for experimentation, and she takes jobs there to build and fund her skills and mad science. She wants to defeat Arachnos, and even does some heroing.

Chaos hired on with a technology company called Subjugation Corp before returning home. On a subsequent excursion to the Rhode Island area, she discovered that most of those involved had gone to fight some unknown foe. Through a clerical error Subjugation Corp's mascot dog had been appointed the CEO. Sensing opportunity for power, wealth, and MAD SCIENCE! she bought them out with a dog biscuit and redirected the organization to more eccentric research and organizing those who were interested in fighting arachnos and other opressors, with, of course, the bonus that such operations would contribute to her ability to conquer the isles.

Acting as a representative of Subjugation Corp, she became involved with the freakshow. Their enthusiasm for technology, anarchy, and recklessly volunteering for bizarre mad science distinguished them as compatible cohorts for an eccentric engineer. It was in the employ of the freakshow that she discovered Mandy Lyons, a lab assistant of Doc Buzzsaw. Chaos' fad of the moment was genetically engineered crops, so she built plant control armor and Mandy Lyons enthusiastically volunteered to test it, becoming Teh 1337 D4nd3li0n!

Introduced to the group through Woefull and Run Riot, Chaos admired their goals. (TBC)

"Keep your friends close and your enemies as far away as possible. Seriously why would you want them around?" - Magus Ex Machina

The nature of plot holes is a secret, but she has claimed that Rhode Island is a focal point, a veritable hurricane of plot holes and the chaotic energy that manipulates them.

Chaos can use plot holes as projections to:

One of Chaos' goals has been to combine the fields of plot holes and robotics. She achieved this after considerable training with the Walking Plot Hole, a robot actually made of chaotic energy. 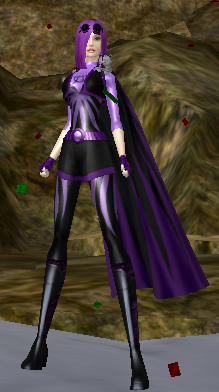 Chaos' cat has multipurpose scanners and computers in its collar.