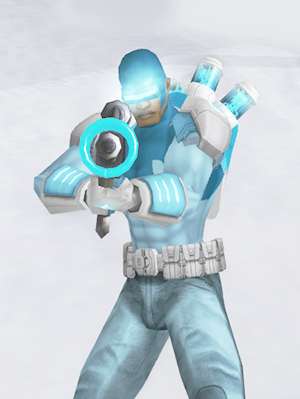 Born to two Crey Industries researchers in the rough and tumble area of Paragon City known as Brickstown, Marcus Cooper shared little of his parents' interest in science, instead preferring to work with his hands on the tangible rather than the theoretical. Experts in the field of cryonics, Janice and William Cooper were tasked by Crey with developing a process to cryogenically freeze organic matter with little to no side effects. An arduous task, the two spent most of their lives working together to solve the puzzle, which left little time for Marcus. But he didn't mind being on his own. He understood the importance of their work, even as a child.

Shortly after his fifteenth birthday his mother was diagnosed with brain cancer, later suspected to be a result of faulty radiation-shielding equipment. Instead of investigating and pursuing legal action, his father spent most of time in his lab working as his wife's cancer progressed until she finally passed away.

"For the longest time I hated my father for not being there while she got worse and worse, until years later when I realized he spent all that time doing in their lab trying to make their formula work. To save her."

In a tragic case of irony, William actually did manage to solve their cryogenic conundrum, albeit months after his wife died. Instead of taking the time to mourn her or celebrate his finally achieving their lifelong goal, he turned his attention to his next task - proving Crey Industries was responsible for the death of his wife. He never reported his success to Crey about cracking the formula. He was absolutely not going to hand over something so monumental to the people who ruined his life. He filed to sue the mega-corporation for malpractice while spending every waking moment perusing over factory specifications and inventory lists.

"He was like a man possessed. I barely saw him most days. When he wasn't buried in papers he was meeting with lawyers and making an uproar. But he got too loud. And they killed him for it."

William Cooper died in a car bombing three days after Crey Industries finally agreed to a settlement of a fifty million dollars. A gang of Freakshow anarchists were ruled as responsible and convicted but Marcus knew it was really Crey behind the attack. They'd now taken both his parents. He planned on finishing what his father started.

"It was the first time I'd stepped foot in their lab in years. I was looking for proof, anything I could use, but I found something I hadn't intended. Discarded prototypes for cryogenic weaponry. Files I found said Crey had ordered the production of them around the time my mother died and when they refused my father's request at investigating their faulty equipment, he stopped working on them. I guess the lawsuit wasn't the only reason he'd been murdered."

Driven by vengeance, Marcus decided he'd put his father's creations to use and use Crey's commissioned weapons against them. He became a vigilante, taking aim at Crey Industries' secret laboratories, and interrogating their corrupt executives. Though he's yet to find the ones responsible for ordering his father's death, as far as he's concerned its only a matter of time.

Cold Gun: Cold Knight's standard weapon is a gun that uses absolute zero energy to slow the atoms of the target to a halt, causing them to not simply become extremely cold but freeze near dead in their tracks while in motion. Aside from freezing objects, it is also capable of creating slippery fields of ice and forming sharp stalagmites on the ground around his enemies feet to ensnare them.
Ice Pack: A bleeding-edge high-tech backpack that boosts the power of his cold gun and gauntlets.
North Pole: A collapsible high tech wand that allows Cold Knight to create blizzards and generate wintry gusts of winds.
Cold Gloves: Gauntlets that expel blasts of absolute zero energy, similar to his cold gun.
Ice Bombs: Small, baseball-sized grenades that explode and freeze everything in a large radius.
Thermal Suit: Marcus wears a high-tech insulated suit that provides protection from the cold his weapons create.

Skilled Engineer: Marcus is a naturally gifted and self-taught engineer. After discovering his father's cold gun, Marcus managed to understand its inner workings simply by taking it apart and putting it back together again a few times. Through experience, Marcus has attained a high degree of expertise in designing and manufacturing innovative weapons and devices.

Though people may view him as cold and aloof, Marcus prefers to think of himself as singularly focused. Both his parents were taken from him at a fairly young age, essentially destroying his established notions about the order of the world and his place in it. Becoming a vigilante is his way of giving his life a new meaning and imposing his own sense of order on a chaotic world.