A History of Greatness

Rebecca Zebulon Meenen was born in Hoboken, New Jersey, in March of 1973. Her childhood was unremarkable, aside from a general unwillingness to socialize with other children (preferring instead to play with her My First Invasive Surgery Kit), and her teen years were spent in the high school library poring over medical encyclopedias.

However, her shot at a prestigious scholarship to an equally prestigious university turned tragic when her entry to the Hoboken Science Rodeo attained critical mass, vaporizing every contestant within fifteen meters and annihilating the souls[1] of the rest. The survivors went on to become influential energy industry pioneers, while Meenen - who was standing behind a lead shield - had the lower half of her face sloughed off by ionizing radiation. Whoops![2]

Fortunately, the disaster qualified her for a completely different scholarship, and Meenen spent the next ten years in Argentina attending Josef Mengele's School of Playing God.

The rest is history. 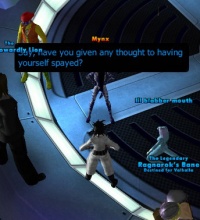 Medicinal use of forearm blades.

She likes them a whole lot.

In fact, she likes them so much that she embarked on a lengthy and painful journey of self-modification to imbue herself with many knife-based metahuman talents.

In combat, the good Doctor has the ability to sprout incredibly sharp blades from her forearms with which to hew people in half, quickly and violently remove obstacles, or cut steaks with surgical precision. These blades can also be detached mid-swing to act as flechettes,[3] after which Meenen will simply grow more.

The process behind this phenomenon is unknown; either it's nanotechnological in nature, and she creates knives from base matter, or it's surgical, and she's just plain full of knives.[4]

Meenen is able to attain almost total invisibility to the conventional visual spectrum, which she uses to surprise her foes and evade attacks. But rather than mucking about with electromagnetic fields or bending light, Meenen's skin simply exudes trillions of microscopic knives that seek out and murder any photons foolish enough to approach.

Meenen is exceptionally intelligent, and holds multiple doctorates in various fields of scientific and medical study. Not only is she smarter than you, she's smarter than your mother, with whom she regularly engages in recreational intercourse.[5] 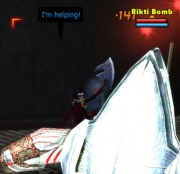 Meenen's surgical prowess borders on the supernatural, although she lacks the ability to administer any sort of field medicine beyond amputation and phlebotomy. In late 2006, she purchased one of the many faceless storefronts in Grandville, and offers her expertise to those willing to pay for it. Services range from simple medical treatment to cybernetic limb replacement to various extreme body modification procedures.[6]

Cash only, no refunds. Ask about our 'Bring Your Own Dead Hobo' special today!

The good Doctor is also an avid woman of science, occasionally passing the hours by experimenting with high energy physics or seeing how many tennis balls she can teleport into the lungs of a passerby before they notice. As it turns out, the answer is "not very many."

In 1994, Meenen and several of her JMU peers formed a band the likes of which had never been seen. They called themselves Facts Concerning The Not Quite Late John Archibald Wheeler and his Einstein-Rosen Bridge Over the Scarred and Mutilated Flesh of a Thousand Waiver-Signing Fools (reached through group consensus over the course of several months), and they played ska. Among their number were:

Their first - and only - single, 'Blowout Orbit Fracture (Cranial Meatsplosion),' was regarded across the entire campus as possibly the loudest and most schizophrenically-written song ever conceived of by human minds.[7] Shortly afterwards, Mutilatron 6500 declared that such activities were beneath it, and bisected Contessa with its laser vision before embarking on a three day rampage through Buenos Aires.

Somewhere in the darkness

Lit by the fires of the sun

Which is actually a star

You should rent a limo

And go see for yourself

Something that ends in '-osion'

Once I knew a man

No, I made that part up

When they're made of children

I made that up, too

Drown in the blood of weasels

The universe is lies

It says it has candy

In its unmarked box van

But it's not really candy

Where is your god now

I can see the hearts of man

All the evil lurking

This is because I am the Shadow

No, that was that guy

The guy with the face

He had a hat, too

Now you lie in bed

Peeing through a tube

During a school-sponsored reunion-slash-lecture tour, on which she was keynoted to give several talks about her work in the field of metahuman tissue grafting, Meenen found herself embroiled in an ill-defined conspiracy of little to no consequence.[1] With the help of ex-bandmate Eva Malice[8], the two solved the murder of Meenen's mentor (Dr. Malachi Verschuer, who was later revealed to be the secret identity of supervillain Dr. Malpractice) and stopped a sleeper cell of Fifth Column agents from releasing a nanomechanical plague.

Well, it never would have worked in the first place because the critical component - developed years earlier by Dr. Verschuer - actually contained a recording that addressed the lead Column scientist by name. Plus a whole lot of C4. It was totally sweet when it went off!

... well, I guess... I guess he always suspected he'd be killed for his work. Or something? Look, I don't know!

Wasn't Longbow there, too?

Yeah! There was totally a conspiracy! A bunch of low-ranking Longbow officers came up with the idea to pick a random supervillain to apprehend to further their own careers, because they were a bunch of corrupt bastards who kept getting in trouble for trampling on the freedoms of the citizens they were supposed to protect!

So why weren't they fired?

Because Longbow has a 67% mortality rate and they need as many warm bodies as they can possibly drum up.

But wait, isn't it their job to apprehend supervillains?

And the other students?

They were a bunch of forgettable losers who served only as joke fodder. Like the prank war in the beginning. Boy, it sure was funny when they stole Eva's door, and then Meenen released poisonous snakes in their room! So very funny.

What was the deal with Eva, anyway?

Through the course of their adventure, Meenen and Eva grew rather fond of each other. And when two people love each other very much, they're completely inseparable until the initial excitement has passed, after which they start to notice things about their partner that they'd somehow managed to miss. And these things are just absolutely intolerably annoying and goddamnit can we just sit down and have one completely normal conversation for once?! You're tearing this family apart!

Things got weird, didn't they?

Well, that was useless.

Honestly, the whole thing may as well have not happened at all.

This legitimate article is not a stub, but Businessmen can improve its legitimacy anyway by adding some wankery.