This character is rated M for Mature. May contain sex, violence, profanity, and many other things your parents warned you about.

Eve is not an imposing figure at 5’4” but she makes up for it with strength of personality. Strong willed and always ready with a sarcastic comment or quick quip Eve does not back down from her opinion of the truth. Her eyes vacillate from colorless white to abyss black depending on the magic she wields. Having a fascination for shadows and death from a young age Eve excelled at Necromancy when her arcane Moros gifts awakened at the age of 14 with the violent deaths of her parents at the hands of a serial killer. Since then Eve has pushed her dark gifts to their full potential, wielding the denizens of the Twilight realm as if they were playthings in her quest for more fame and her own brand of justice going so far as to receive training as a CSI agent in order to get legal access to crime scenes where she can study the recently dead as well as aid in capturing those living with no respect for the true power of the Abyss.

Having been Awakened for the longest time and thus being the most experienced in the arcane within the Rumored Five, Eve is often called upon as advisor in matters of occult knowledge and magical theory. 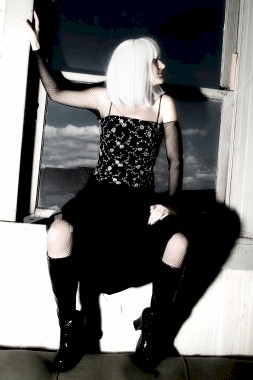 Born to Alex and Marisa Field, Iris would not be known by the name Eve Kline for many years. Growing up in the city of New Haven Oregon Iris was a happy if somewhat curious and inquisitive child. Her mother being a professor of biology at the local university encouraged Iris’ never ending quest for answers, even when her questions took a strangely morbid turn at the age of 11. Iris would often quiz her father, a policeman about the most recent crime he had encountered, especially if there was a murder involved. The Field’s were unsure how to direct their otherwise charming and kind young daughter away from her darker interests, but were never quite able to approach the matter in such a way that did not simply encourage her further. Still, there was little else Iris could be faulted for, excellent grades, sociable and polite, a true joy to be around the Field’s seemed to live a normal, almost American dream-esque life.

The Field’s idyllic existence would come to a gruesome halt three months after Iris’ fourteenth birthday. A serial killer, known by the call sign “The Butcher” was the front page headline for weeks solid. Officer Field and the mundane police force had exhausted their resources in trying to capture the rampaging psycho who’s only consistant MO seemed to be taking one piece of his victims with him after his crimes. In desperation supernatural support was called in on the advice of Officer Field to catch “The Butcher” before New Haven was driven into panic. The call did not come soon enough.

Iris was very short spoken about the events of that night, despite being questioned multiple times by the New Haven police, and later FBI. All she would say in a low clipped voice was “My father shot him. The Butcher killed them.” What became apparent from the crime scene and resulting investigation was that The Butcher had gained access to Officer Field’s personnel file, located the Field home and gruesomely murdered Alex and Marisa Field. It was speculated that Officer Field was able to shoot The Butcher twice before succumbing to his wounds heroically saving his young daughters life. Iris would never correct this story, preferring to not reveal the traumatic arcane Awakening into her Moros mage gifts.

The true story only told to a trusted few many years later within the Rumored Five is this: Iris was awakened by her parents screams. Crawling from her bed to the door she would peek out into the second floor hallway leading to the balcony. Across from her lay her already dead father, his warm sticky blood coating Iris’ hands as she moved slightly into the hall only to see her mother laying prone trying to crawl away from the advancing serial killer. Tears squeezed from her shut eyes as Iris heard her mother cry out in pain at the first stab from The Butcher’s knife. Horror and rage now filled the young teen, a rage so deep and dark it called out to the Twilight, the realm of the dead, demanding retribution. A mixture of fear and wonder filled Iris as she felt her first necromantic gifts come to life. She channeled this raw emotion driven power into her dead father’s corpse, her eyes fluttering with concentration as she wrestled control over the limp limbs, raising her deceased father’s right arm, commanding it to pull the trigger of the already gripped sidearm until it clicked empty. The deafening sounds of gunshots were still not quite enough to drown out her mother’s last screams of pain. The Butcher fell from the second story balcony to the living room below, leaving Iris to sit in the cooling blood of her dead parents, alone, until the authorities arrived.

The rest of Iris’ young life was spent in the ‘care’ of her maternal uncle and his family. A good man and honest worker when he was sober, loud, violent and incestuous when he was drunk Iris took to keeping herself locked in her own room when she was not required to be downstairs for meals. The once social teen did not attempt to make friends at her new school, focused on her studies, graduated early, and left for college. Away from her extended family, Iris, who now preferred to go by Eve, when she spoke to people at all, began to experiment more intensely with her Moros abilities, gaining confidence and by the end of her junior year, was able to direct her gifts towards practical applications. Graduating with a degree in biology and medicine, Eve applied for and was accepted into the Crime Scene Investigator program in New Haven.

Eve spent what time she did not spend at work seeking out other mages to learn from. It was from these contacts that she was invited to assist in what seemed an impossible task and where she would first meet the other members of the Rumored Five.

GEM OF THE KINGS SAGA