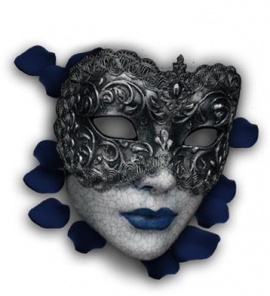 Simultaneously silver & fork tongued, dreadfully sarcastic, vindictive, and nearly impossible to get along with – this little impling is the premier example that big things really do come in small packages. Think of Felix as the court jester. With the exclusive ability to truly mock the King, the fiend's role in the court is not only to entertain but tear down the almighty ruler and expose his weak points so that he may recover and strike back stronger than before.

Due to the imp's difficult and enigmatic nature, it's nearly impossible to truly see what is beneath the velvet and velour.

Felix trusts no one. The majority of the demon's motives are self-serving and focused around protection from the hazards of a harsh reality where the weak suffer and the strong thrive. This existence has engendered Felix's cynicism to the point where the fiend quite possibly will never have a positive statement to dole out regarding anyone or anything.

This is not to say that Felix has no sense of humor, Quite the opposite. Nearly everything can be spun into dark humor or a crack at some bawdy joke. Felix is of the opinion that sentient coexistence is one gigantic awkward and painful joke with no impending punchline, so why not invent a little mischief along the way?

The average first impression of Felix can be summed up in a simple word: short. The imp stands at a small height easily below five-foot-two, sitting at a mildly curvy weight of one hundred and twenty pounds, give or take. Those who do not lack common sense can quickly determine from the fiend's bearing and character that Felix truly does not understand – or refuses to believe – that they are a creature of small stature.

The small corporeal shell that Felix was bound to within this plane is an inventive intermingling of demonic and human characteristics; thus, Felix will always appear 'human' to their own kin and 'demonic' to the human race. To the eye of either, Felix can be considered pretty – until age-old instincts and general phobias set in.

For all intents and purposes, Felix fits the primary petite stature; small waist, ankles, wrists, shoulders, and throat. When shifted into female form, the demon tends to have a dramatic increase in curvature around the hips and thighs, concluding with the bulk of her legs being slightly thicker than average. As of late, the imp has been packing on a few extra pounds due to excessive overeating of human foods such as candies. Whoops.

In the past twenty years the elderly Archmagus overseeing House Gonzaga has allowed Felix the freedom of running errands on his behalf. Several thousand years has yielded little results in the area of discipline, so the old doddering fool believes a little freedom held against Felix's frequent jostling in the gilded cage may put the impling at ease. Seeing as within public Felix is a mild representation of House Gonzaga, the demon's budget on clothing is extensive – pointed shoes, leather and velvet gloves, cufflinks, Winklepickers, ascots, jabots, fur, and mink coats rule the day. You can bet on any given occasion, there is a plethora of hidden daggers and knives stowed away in discreet little hidey-places along Felix's form. For added protection against muggers, of course.

In the midst of a bleak summer haunted by a wretched famine and the newest outbreak of plague, a small circle of tribal magus summoned forth and sealed within a three-dimensional husk a simple demonic entity. For decades to come, this creature would serve a dual purpose; provide relief from the scorching sun and lay ruin to the enemies of the tribal humans and their magic-wielding protectorates.

For a time, even with such a tainted entity amongst their presence, the tribe prospered. As the tide of civilization became inclined to settle lands and claim properties for villages, the demonic being was allotted to a temple for several hundred years. The people's faith in this entity waxed and waned; particularly bereft when the creature itself fell into hibernation.

Eventually, the local circle of magus surrendered the demonic entity to a greater source of magic than themselves in the throes of war, whom proceeded to parade around the summon in the company of those grand and those with little rapport. Within hundreds years worth of time, this branch of magus would eventually prove to belong to House Gonzaga of Renaissance fame; a successful line into modern times who would go down in history as master patrons of the arts and music.

Stationed within the beautiful city of Venezia, the Archmagus of House Gonzaga christened their precious demonic summon as Felicio. Each son, grandson, and great grandson and so forth would play the part of grooming, domesticating, and educating Felicio. For you see, in those days, the familial summon was far rarer and much coveted for. Felicio once again sat amongst the company of Kings, Sultans, Holy Roman Emperors, and Pope's while the shrewd Gonzaga's filled their coffers on business ventures.

In these days, the glorious golden centuries of Gonzaga prosperity is no longer. Impling summons such as Felicio are far more common, yet the newest great grandson within the familial line still treats the centuries old demonic purchase as if it were priceless.

At the moment, there is only one individual who she will accommodate having some form of 'relationship' in her life; with him, she simply has no other choice.

Cecilio is currently the eldest mage within the Gonzaga family, and is the de facto Archmagus and leader of House Gonzaga. He is a man of little patience, possessing a devotion to Catholicism that rivals even the Pope himself. Although the Gongaza family has not stagnated and withered away under his guidance, he deems himself a great failure due to the lack of growth within the familial coffers.

Despite his unshakable beliefs in the Catholic faith, Cecilio views Felix as a strong addition to the family, practically spoiling the impling with endless access to food, entertainment, and a full line of fashion. His only insistence is that the demonling is kept away from mingling with the rest of the family; under lock and key in a windowless, doorless room where only the Archmagus himself can see within and Felix cannot see out.

Ceaseless rumors sweep through the family every year of Cecilio's burning lust for the pallid flesh of the impling kept within his walls. As of yet, the devout spellweaver has not shown signs lending truth to these rumors aside the odd hour two every once and awhile staring into the fiends chamber.

The following information is only known to those close to Felix. Much of what is seen or said in public by the imp is either an convenient twist of the truth or the tip of the proverbial iceberg. I must respectfully ask that none of the information is meta-gamed.

Felix, as time progresses, must consume the essence (the soul, life-force, whatever mythos you wish to use to identify it) of another sentient creature at least once a month. Evolving beyond the means of their three-dimensional body, the imp has cleverly began to amass a cache of souls over several thousand years, thus effectively creating a well of souls within to ensure survival.

First, it began with the elongation of the imp's tongue in the nights when man began to settle villages and till the land. The demon learned to manipulate this bizarrely evolved feature of itself, transmogrifying the tip into various implements such as a sharp tip and a proboscis-like protrusion. Felix's early caretakers were alarmed, but attributed it to the frightening nature of the beast.

It wasn't until Augustus Gonzaga's cellar completely collapsed in of itself while housing Felix did the problem present itself as less than complex. What the familial spellweavers could make out is that during the early hours of the morning during a crisp fall, the imp had been tortured into hiccuping a small vortex to defend itself from a fellow larger summon. While some members of the Gonzaga household were thrilled that the imp could possess such a talent, August was unimpressed with his wine stock being sucked into demon's gullet. Felix's 'maw' was sewn shut and clamped down tightly until Augustus' death during the advent of the Renaissance.

The far less narrow minded in the family eventually decided it's in the interest of the family to put Felix's small defensive talent to use. The demon underwent thorough examination and was given conditions under which to use this secondary feat, as well as gifted with a magically imbued veil to give the illusion of appearing somewhat harmless among the jittery numbers of mankind.

While the Void Maw isn't necessarily Felix's main power (obviously, it's mastery over ice!) it does compliment the demon's nature. The imp can swallow weapons, store them in the small pocket dimension in its stomach, and regurgitate them for use later without it seemingly harming them. Though it's rare for them to do so, Felix is plenty capable of entering a fight utilizing tongue, teeth, and maw to literally devour an opponent. It's recommended that no one lift nor touch the veil.

As of current, several grooves have mysteriously appeared at the base of Felix's horns. Day-by-day, they begin to wind up, and will eventually stop at the very edges. These are etches imbued by Felix's Master, with the intent of creating a magical conduit within the demon for purposes only known to the Archmagus.

The size that all currently view Felix in is not standard "imp" size most often associated with imps. This is a preference of Felix's Master-Magus so that the imp appears more humanoid and identifiable to the general populace. It's merely a tactic; like a kitten's cry to make the mother feel empathy for their hunger.

Film taken of Felix whether in photographic or digital form always depict a horrifying mass of warped shadow with a broad grin full of fangs in the midst. Essentially, taking a photograph of this demon is paramount to welcoming them inside of your home when it is developed.

It is highly lethal to remove the veil upon Felix's face. The void maw that splits her face into a grin can consume solid objects, including many regular-sized humanoids -- plus limbs.

Felix's physique and voice are conceptualized through the magic-weaving of magus and the souls she has consumed in the past. The voice that she speaks does not belong to her. It is an echo of a deceased execution victim from the Renaissance era. Attempting to copy Felix's voice is impossible, because the veil on her face is specifically designed to mute the chorus of other voices that compose her true speech.

It is also impossible to copy her physical appearance due to the same reasons as above. The shapeshifter will simply turn into a Mediterranean woman that is similar in features, without blue skins and other demonic features.

This article about a character is a stub -- a small, but growing, work in progress. If you're the creator of this character, why not consider expanding it?
Retrieved from "http://virtueverse.net/wiki/Felix"
Categories: Character Stubs | Magic | Anti-Villain | Character | Imp | Demonling | Demon | Summon