The demon lord Beldegan found an ancient portal witch linked their world to an unknown one. He sent his two most powerful lieutenants "Veldekara and Nidean" to scout the new world. Once they arrived to the new world; Nidean realized there were millions of dead bodies he could create an army and rule the new world on his own. After creating a beach head in ancient Japan. Over time Veldekara fell in love with a priestess. The priestess convinced Veldekara that Nidean’s rule was wrong; Thus Veldekara led a rebellion against Nidean. Because of Nidean’s unique power He couldn’t be killed by normal means. So the priestess and Veldekara invoked an ancient spell sealing him within the planets Magnetic field. However knowing the planets magnetic field would keep him trapped forever, Veldekara and the Priestess mated that way Veldekara’s blood and power would be passed down through the ages and would surface when it since the fields thinning.

Xionos was a normal 21-year-old guy. He was just finishing up collage when his power awakened for the first time. He was on a date with his girl friend Sarah at some cheap restaurant. Everything was going normally when he grabbed at his water glass and froze his drink. Moments later it unfroze, his girl friend didn’t realize anything happened. They finished dinner without talking about it and went back to his dorm. The next morning Xion woke up before his girlfriend thinking about what happened the night before. He walked to the living room where a pitcher of water was sitting and tried to see if he could make it happen again. For the longest time nothing happened until his girlfriend walked in asking what he was doing. He just looked back at her and told her it was nothing. She leaned over and kissed saying she was going to be late for a class and she would see him later that night. Xion ended up skipping his classes for the day and stared at the pitcher of water. After about an hour of staring at it he felt a tingle at the base of his neck. The tingle went down his arm and to his fingertips; glancing back at the water he realized it was starting to freeze like the drink. The next four hours were spent freezing and unfreezing the pitcher of water. Realizing what was going on he moved to the bathroom and lifted up the toilet seat. He pointed his hand at the water and energy left his body and froze the toilet water. Over the next few months he learned to control his powers more and more. He was able to absorb the water particles in the air and send ice shards or balls at a target object. He could also freeze the ground and make an ice patch. However at the end of the day he kept his powers to himself afraid people would think he was a freak or even try and kill him. One day he was walking to class from getting a bite to eat with Sarah. a run away bus drove onto the side walk toward him. All Xion could think was he was going to die and how he wished he were at his dorm. He shut his eyes and waited for the bus to hit him. Nothing happened. He opened his eyes and realized he was back at his down and there were ice shards all around him. Later he would realize that he could form ice around his body and disassemble his molecules and transport them somewhere else. Then the ice would reform his body at his destination.

Birth of a Monster

Having his powers under his control Xion became the Hero Frozen-Nexus. He used his powers for whatever was needed of him. However one day He passed out having seizures. When he awoke his clothes were shredded and he was lying in the middle of the street. His mind fuzzy he ran back to his dorm. When he entered he saw blood all over the room and his girlfriend lying dead in the middle of the floor. He ran over to her and touched her. Images flashed in his head, Pictures of him severally stabbing her with an ice blade. Then looking in the mirror. His face was transformed into some kind of monster. Dropping the ice knife and letting out this monstrous howl and ran. Xion dropped Sarah’s hand and ran. Over the next month he had the seizures more frequently and would wake up and his clothes would be shredded with blood on his hands. IT didn’t take long for a team led by a man named Kelstevak to find him and lock him up. For two years he was locked up, poked and prodded, test after tests not only on him, but the creature he could turn into. One day a woman came to him, and told him what they had learned from the creature. She told him how he had demonic DNA within him and his body would transform at random but it was getting stronger and if he didn’t learn to control the monster within it would consume him. Two more months later there was success. He transformed and retained his mind. Another 4 transformations later and he could turn at will. The government enlisted him to join Kelstevak’s task force, a team that could deal with special cases. During an op Frozen-Nexus was kidnapped. It was a trap to capture him. The doctor ended up cloning him but because of his demonic blood the clone was tweaked. They changed it so the clone could use fire and they made it female. Hoping to use this woman for their own they were going to wipe her memory and stamp her with a new one. Frozen nexus was able to escape and broke her out as well. When she came to she had all of Xion’s memories up till the point of the cloning. After a month of settling in and calling herself Selene, the government assigned her a place on the team. She took the code name Pyro-Nexus.

The War For Reality 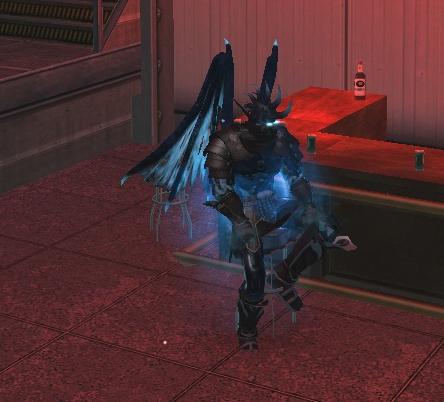 During some of his time away, Frozen-Nexus met a being called Labal. Labal was the leader of Abyss. After being invited to join abyss, Nexus became friends with Ashara dark, Shadow strike, and the leader Labal. However he was still a member of Kelstevak’s task force. One day the tragic happened. Nidean broke free from his prison. In that moment Frozen-Nexus fell into a coma. In the coma Veldekara’s soul came to him and told him his past and what he must do. When Nexus awoke he went too Labal and his wife Seba'eld. There he made a deal to sell his soul for the power to stop Nidean now taking the name Soulnidean. The moment Xion’s soul left his body; Veldekara was pulled into the body. In essence Veldekara was reborn. However over a short time Labal relinquished Xion’s soul but the two souls merged into one. Keeping the name Nex they faced Nidean and stopped him. Having been beaten, Pyro, Nex and Nidean are attacked by one of Beldegan’s lieutenants. The three are forced to work together to stop him. Before his death, the lieutenant told them Beldegan had an army and was going to over through this world. When he died the three agreed to put aside their differences and work together for the time being. They went to the ancient portal and went back to where it all started. The war lasted a year. During the final battle Nex transformed into his full demon form. Knowing he can never transform back giving everything he had to stop Beldegan. The realm was collapsing due to the damage and power being exerted on it. Nex told Pyro and Nidean to take the portal and leave. On the other side the two waited just as Nex is hurled through the portal. Nidean is able to close the gate just in time as the remains of the realm would have shot out through the gate and destroyed them.

Death of a Hero

Having survived the War the three realized that only a few months have passed on earth. The three take their separate ways. Realizing a massive power increase in Nex, Nidean talks To Labal about it. Warning him that if the power increases too much, Nex's body will go supernova and could destroy the city. Labal agrees to talk to Nex and calls him with a problem. When Nex arrives, Labal confronts him. Nex becomes enraged and attacks Labal. Even Labal realizes Nex's power is dangerous tries sealing him in the throne room. The battle lasts for a while each taking incredible blows when Labal realizes that Beldegan has possessed Nex. Beldegan’s power was too great and was overloading Nex's power. Labal is able to get the truth out of Beldegan and blow a hole in Nex's chest. Beldegan knowing that Labal and Nex would be destroyed in the blast shifts away. Being in control again Nex collapses to the ground. Veldekara’s soul was released and left so Xionos was alone. Xion tells Labal that the power linked his body and Beldegan’s realm, so when he blows it links the two realities together. Labal sending out the members of abyss from the throne room reseals it. Labal tells Nex the seal is powerful enough to contain the blast into the throne room. With the last of Nex's power, He teleports Labal out of the room and detonates, Killing himself and destroying the throne room.

After morning the passing of Xion, Shadow Strike is contacted by a creature that can tell him about Frozen-Nexus’s death. Shadow takes the stranger to abyss. The stranger is able to temporarily paralyze Shadow and destroy Abyss's security. The stranger removes his robes and it is revealed he is an Angelic being. After going toe to toe with shadow, having revived, the stranger transforms again. This form is stronger and more agile. Shadow realizes now that the stranger is Frozen-nexus. Somehow having a new body but still possessing Xion’s soul. Delving into Nex's mind he realizes a being is controlling him. Somehow the being knows about Nex's last times on the planet and was able to recreate him after his death. Shadow proves to be persistent and pulls Xionos soul to light and banishing the malevolent being. Now Frozen-nexus must learn how to live in this Angelic form, and controlling new powers witch he couldn’t dream about in his demon body. As of late, Abyss and Labal have banished him from Abyss saying he is untrustworthy. Its unclear what Nex's future holds.

((If you want your name on the list just add it, I will fill in the rest))