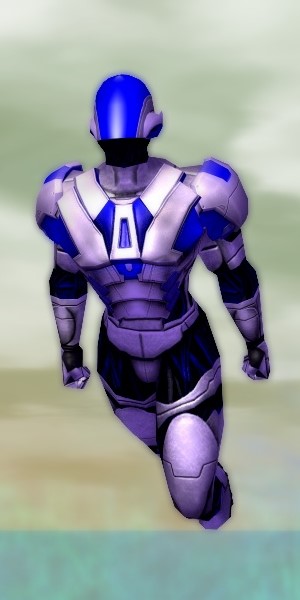 Lt. Mason Greene is a top graduate of the United States Naval Academy in Annapolis. He is a 3rd generation Naval officer. He was immediately assigned to the U.S.S. Enterprise where he distinguished himself as an F-14 Eagle fighter pilot. A master in air-to-air combat, he was involved in multiple first-strike assignments numerous covert operations in the Middle East and South America.

A couple of years before the Rikti invasion, Lt. Greene went through dramatic physical changes. Once dormant mutant genes took effect, making his body into an energy dynamo. His energy levels reached dangerous levels and it became harder and harder for him to stop firing off random bursts of energy through his hands and body. He was quickly sent to Dr. John Westmarch, a leading authority in bioengineering and medical doctor.

Under the umbrella code name Project Condor, the good doctor monitored Lt. Green’s condition. After extensive analysis, the doctor managed to find a solution. Using his newly patented technology on organic microchips and nanotechnology, Dr. Westmarch implanted two chips along the base of Lt. Greene’s spine. The microchips are not silicon, but carbon-based minimizing the risk of bodily rejection. A formula of specially designed nanomachines was also injected into Lt. Greene’s body.

The nanomachines were designed to support the microchips by manipulating the body chemistry to maintain control over the mutant energy fluxes. They were also designed to make any cellular repairs, giving Lt. Greene the ability to recover from injuries at an accelerated rate. The nanomachines are fully self-sufficient, running off the heat energy that the body naturally produces.

The microchips had two functions. They were designed to monitor and control the energy levels in Lt. Greene’s body. With the chips in place, he could fire off his energy blasts or give himself temporary boosts of power with more control. The days of sporadic uncontrollable outbursts of energy were now a thing of the past.

The second function of the chips were to synchronize Lt. Greene with Dr. Westmarch’s newest battle armor.

HAWC stands for Heavy Assault War Chassis. It was initially designed and first used during the Rikti War as an all-environment tactical unit capable of reacting to a wide variety of combat situations. The suit is constantly updated and improved upon as new technology is integrated and combat data is analyzed. The original powered armor was a hulking piece of metal, weighing over half a ton. The current model, Cobalt HK011, is a lightweight and flexible marvel of engineering weighing less than one hundred pounds.

The outside shell of HAWC is a set of plates consisting of a mixture of titanium, steel, ceramics, plastics and/or impervium, which makes it very resilient to many forms of attack. It is impervious to standard small arms fire and can withstand multiple direct hits from heavy weaponry before being compromised. The ceramic and plastic composition, along with an insulation layer, offers protection against extreme temperatures and other non-conventional weaponry such as radiation.

A thin invisible deflection shield surrounds the suit offering additional protection. It is most effective in deflecting and redirecting kinetic energy, which allows HAWC to withstand heavy blunt force or crushing damage. The absorption and redirection of kinetic energy has an added effect that prevents HAWC from being knocked down. The field is also an additional effective counter measure against non-conventional forms of assault.

HAWC is able to project different forms of kinetic force energy. The magnitude and destructive force of the energy blasts can be adjusted from minor concussive blasts that may knock out a foe to something powerful enough to rip a large hole in thick military grade heavy armor plating. He can fire off short rapid bursts or more concentrated blasts. The energy can be adjusted to explode in a wide area or cascade like a wave. He even has a long range sniper energy blast that can take out enemies with one shot.

The energy can also be concentrated around the hands, offering devastating effects in melee combat. Combined with the super strength that the suit affords, HAWC can easily crush opponents with energy enhanced blows.

Underneath the outer shell, HAWC has a unique mesh of polymer fibers that functions similar to the human muscular system. It is highly durable and when energy transferred into the fibers, it gains flexibility and strength. At full power, the suit is capable of lifting 50 tons of weight.

Because the fibers are so flexible and responsive, HAWC lacks the typical bulk and rigidity common among lower tech powered armor. Its movements are graceful and fluid and almost functions like a second skin.

It is fully functional underwater or in a vacuum such as outer space as it is fully sealed and pressurized. The backup life support can be maintained for up to 24 hours.

The mechanized suit is equipped with a vast array of sensory equipment such as radar, motion detection, thermal imaging, radiation detection, multiple targeting locks, range finder, telescopic vision to just name a few. HAWC has advanced secured radio and satellite uplink communication capabilities as well as high definition video and audio recording. The suit’s central computer has the ability to communicate with other complex digital systems which can be used to infiltrate or hack other computer networks.

Along with the standard sensor array and equipment, HAWC also has a cloaking device. It uses light refraction technology giving HAWC a translucent look and makes it invisible to conventional forms of surveillance such as radar or motion detection. Also unique to HAWC is the Westmarch Hawk-Eye V3 targeting computer. The combat computer performs data analysis, pinpointing vulnerabilities and weaknesses on the fly.

HAWC is capable of incredible speed and agility. In flight, the suit can attain supersonic cruising speeds and is capable of temporarily generating enough power to achieve orbital velocity to break free from the Earth’s gravitational pull.

HAWC also “synchronizes” with Mason which allows for unparalleled responsive times. The suit is capable of achieving superhuman levels of agility, dexterity and responsive reaction. On the ground, the suit has been clocked at 300mph at full running speed.

Mason has the ability to generate large amounts of bio-kinetic energy that can be converted into various uses and has caused some permanent effects. He can be best described as a biological nuclear reactor. Even without his armor, he is capable of firing off energy blasts.

Because of his constant build up of energy, Mason never gets tired or fatigued. Dr. Westmarch surmises that Mason’s energy generation is essentially limitless.

At will, Mason is capable of flight by using his kinetic energy as a type of thruster. He is quite agile in flight, allowing him to hover and make complex maneuvers. Flight takes little focus on his part, similar to walking or running.

Even with all his powers, Mason has some vulnerability, one of which can be potentially dangerous to those nearby. His powers must be controlled and maintained.

Mason’s energy generation is unstable. Without the microchips and nanotech implants, his bio-kinetic energy would constantly build, ultimately causing an unstable reaction. The reaction would result in a complete release of the energy similar to a nuclear explosion.

He must either have the microchips in his system or be placed in a specialized chamber at Westmarch Enterprises that allows the slow stable release of his energy generation.

Mason has the same weaknesses as any other human being (at top physical condition), although he retains his metahuman energy powers, agility and reflexes. The nanomachines in his body help accelerate his healing (double the standard human rate) but he is vulnerable like every other normal person.

As a Top Gun fighter pilot, Mason is masterful in flight. Highly trained in aerial combat augmented with his actual military experience, there are very few who can outmatch him in a dogfight.

To further his growth as a hero, Mason continues to train to improve his combat skills. His training comes from other heroes and instructors, usually from Vanguard or Longbow. As a result, he is a proficient fighter, marksman and tactician. Recently, he has developed a knack at reconnaissance and infiltration using HAWC stealth technology.

With Dr. Westmarch’s personal tutelage, Mason has become a proficient mechanical engineer and is able to make modest repairs and updates on his HAWC armor.

Handsome by most standards, athletic, full of wit and charm, Mason has always been popular. He is an easy person to get along and is not above making silly jokes and pranks. Since he is in a relationship now, he has tempered his ways but previously, he was quite the flirt and a skirt chaser.

During missions, he is much more serious, avoiding unnecessary chatter. Focused and determined, Mason maintains his mission goal as a priority.

Mason is currently in a serious relationship with Merin Winters, aka the Winter Mist. His sister Melissa is also a budding hero herself, known as Musica the sonic defender.

Ingram and Blue Sparrow are two other agents under Project Condor and often work with HAWC. They are all close friends and train together, making them a cohesive and united team.

Project Condor is a highly classified military operation, completely funded by Dr. Westmarch through his company, Westmarch Enterprises. The project also has a handful of other agents whom Dr. Westmarch recruited.

All candidates of the project are metahumans with serious instabilities or flaws in their powers. Dr. Westmarch uses his vast knowledge and technology to mitigate and control those powers.

HAWC is a tribute to all the powered armor heroes found in comics, movies and anime. Most of the inspiration came from Iron Man and Bubblegum Crisis.
Retrieved from "http://virtueverse.net/wiki/HAWC"
Categories: Character | Hero | Blaster | Energy | Human | Male | Technology | Power Armor | Military | Pilot | Virtue