"As one can imagine, the urban soldier of Paragon City known as the Hell Trooper has a wide array of gadgets and weapons on his person that he uses in his battles. To better understand his equipment, and the effectiveness to which he uses it, we have used a combination of surveylence footage and simulations written using the Architech program to observe what he is capable of. So pay close attention, because you never know when you might end up having to fight this guy!" ~Operative Harrison

The main part of Hell Troopers armor is of course, the chest plates themselves. It has been confirmed that these are nothing more than kevlar with trauma plates embeded within them. No where near the sort of protection that full on power armor could provide and really only capable of providing decent protection against small arms and some forms of explosives. It should be noted how ever that Hell Troopers fatigues are also made of a very heavy cloth that seems capable of absorbing the impact from bullets, so it can be assumed that they are made of a similar material to the chest armor.

Secondly, is Hell Troopers leggings. These are actually armored boots that also contain hydrolic boosters and small carbon jet mechanisms within them. So these boots not only protect the legs, but also give Hell Trooper the ability to leap great distances.

Third, is the gauntlets that Hell Trooper wears. These are probably the closest thing to true cutting edge tech he has. These gauntlets function as a control mechanism that is seemingly connected to the rest of the functions on his armor through an as of yet unconfirmed network. Certain aspects of Hell Troopers armor, and some of his other equipment seems to be controlled by these armored gauntlets. It is suspected that the gauntlet's have an impervium plating covering them so as to protect what ever electronics are inside the gauntlets.

The fourth and final aspect of Hell Troopers armor, is of course his mask. This seemingly ordinary gas mask actually posses a simple Heads Up Display within the goggles that allows Hell Trooper to weed out and discern the targets around him. No doubt one of the features of his armor that is connected to his gauntlets. Additionally, since it is also a gas mask, there are certain environmental conditions that it is presumed Hell Trooper can survive within as long as he is wearing his mask. 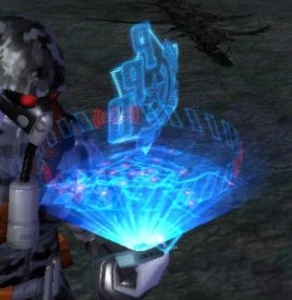 Like many of Paragon Cities heroes, Hell Trooper is in possetion of a police radio that he can use to keep tabs on the going ons of the city. There isn't anything particularly special about this police band, but since it is technically part of Hell Troopers equipment, it was worth at least mentioning.

A commonly seen piece of equipment amongst the ranks of Longbow as well as some heroes and villains. Hell Trooper also employs what can be defined as the Legacy Class Assault Rifle. These rifles, though haphazard and cobbled together in their appearance, are very potent pieces of field equipment as each of these rifles is easily a small arsenal in a single weapon. It posses' the standard, single, burst, and automatic fire modes that any modern weapon features. In addition, the rifle also has alternate fire modes that enable it to be used a shotgun, grenade launcher, or flame thrower.

It goes without saying that this rifle is the primary piece of equipment in Hell Troopers arsenal, and that he is capable of using its capabilities to great effect. It has been observed that the ammunition utilized by Hell Trooper has been 5.2mm Mondragon rounds in the standard firing modes of the rifle, and they are often swapped out for standard .308 Rifle Rounds when performing sniper work. The grenades that have been witnessed being fired from the rifle as well and the standard M30 Fragmentation Grenades. It's believed that in situations that non-lethal force would be needed, Hell Trooper also posses standard rubber bullets and concussion grenades that he can swap out for with his ammo as well.

The thugs of Paragon City aren't the only ones that carry these weapons.

As a soldier, it comes to no surprise that Hell Trooper posses' a secondary side arm to compliment his impressive Legacy Rifle. This pistol is nothing more than a simple, low caliber anti-personal weapon. Hell Trooper rarely employs it in combat, but it is still something that should be noted as he may in rare instances use it to try and catch an enemy off guard when they believe he's ran out of ammunition for his main weapons. 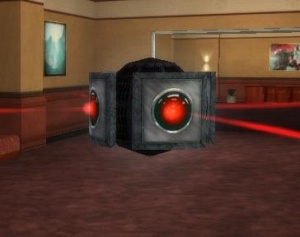 A common piece of equipment amongst many individuals is the ETS01 Target Drone. Hell Trooper employs one of these units himself which is presumed to be linked to the network that the trooper uses to operate all of his equipment. When this drone is active, Hell Trooper uses it to better pin point a target he intends to open fire upon, and can even utilize it to improve the accuracy of any attempts he makes to act as a sniper against enemy contacts. It seems that prolonged use of this drone how ever, eventually causes interfearance with Hell Troopers instruments as eventually he becomes unable to continue effectively maintaining his aim against some targets, and is forced to shut the drone down so his armors systems can reinitialze themselves. This is something that may be possible to use against him should he be encountered in a combat situation.

A crude, yet effective piece of equipment that Hell Trooper seems to posses a great abundance of, are a collection of razor sharp knives that have been balanced and weighted for use as a throwing weapon. Hell Trooper is sometimes seen using these weapons against his targets when in short range combat.

The standard issue NLRC Web Grenade is one of the more commonly employed pieces of equipment on Hell Troopers person. Commonly seen being used by many individuals through out the world, these grenades upon impact with any target explode in a mess of sticky ropes that will hold the target in place where they are standing. With how many individuals have been witnessed trying to rush Hell Trooper head on in a fight, it comes as no surprise that the trooper will employ these grenades to keep his targets at range. 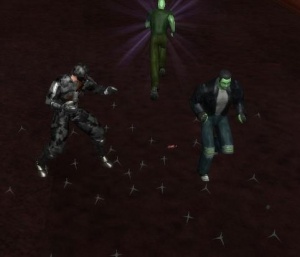 Hell Trooper sends some cocky Trolls on the run by giving them something to trip on.

Basic spiked ball bearings made out of polished steel. Another crude but effective piece of equipment that Hell Trooper employs. A common tactic implemented by him being to throw the spikes around him when someone draws too close, causing his enemies to trip themselves up on the spikes as they attempt to attack Hell Trooper. Is has also been witnessed before that sometimes he will throw a handful of these spikes at a target he's ensnared in a web grenade, causing them to trip over the spikes as they struggle to try and free themselves from the webbing they are ensnared in.

These electrified throwing weapons are capable of sending a high enough level jolt of electricity through a target that it can temporarily overload the synapses of its target, or even scrambled the circuitry of some machines as well. Though Hell Trooper doesn't employ them frequently, there have been a few moments recorded where he was overwhelmed enough by hostile contacts that he needed some way to incompasitate a one or two so as to better handle the situation.