Quick to laugh and make a joke. Hermod enjoys taunting and outdoing others whenever he gets the chance. This causes him to get into a fair amount of trouble, often resulting in a quick trip through the medical transporters.

Hermod first came to earth with the intent of gathering as much information as he could then relaying it back to his father. But when he discovered the presence of demons and the warmongering Rikti, Hermod feared that this could possibly be the prophesied event that ended everything. Never one to shy away from battle, Hermod took it upon himself to root out the evils of earth, all the while ignoring that none of the other gods have come to aid him.

Being a lesser god comes with a lot of perks. Not only does Hermod benefit from the divine speed, battle prowess, and near immortality that he was born with; but he doesn't have any of the grudges that the more "popular" gods have as well. He may not be able to wield powerful magic like his father or a magic hammer like that blow-hard Thor, but what Hermod lacks in godly powers, he makes up for it with his sincere concern for the mortal world. 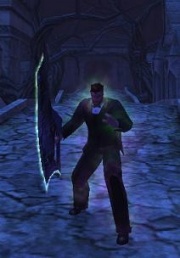 Due to his divine origin, Hermod emits a natural green glow and appears to be able to change his height (to small degrees) and physical appearance at will. Hermod almost always wears his favorite suit of red armor to be ready for a fight in a moments notice. Recently however, Hermod has gone a bit stylish and has been wearing a custom made suit. This is due to him finally finding an intact rikti blade which he uses as incredibly effective shield.

Despite the sometimes witty banter during battle, Hermod is not much of a talker. But only because he never stays in one place long enough to ever engage in a conversation. Although he's a lesser god, he tends to shy away from others and keeps to himself. The only exception to that is his partner in crime-prevention, Ephestal. The two can argue quite relentlessly sometimes, and woe to any villains that get caught in the middle. As the two get hotter about who is right or wrong, they begin to take it out on any villains caught in their path, as if each of their pile of defeated enemies decides on who is right or wrong.