Holy Shit NINJAS is not a person, nor is it a robot, a mutant, an escaped science experiment or anything else with a physical form; 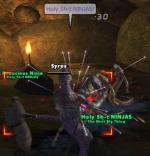 These snakes found out the hard way!
rather, it is the free-roaming essence of ninjosity, the force that makes ninjas so awesome and badass. It first made itself known in Japan around the 15th century as the essence of peasants practicing guerilla warfare and, from these humble origins, became a totally sweet living shadow that cuts heads off all the time and doesn't think twice about it. What it's doing in the Rogue Isles is anyone's guess, but from the looks of things its ultimate goal would be to flip out and kill people.

As an aside, Holy Shit NINJAS does not, strictly speaking, have a name. Rather, it is what people shout when they see it (or rather, when it lets people see it, because you can't see how totally awesome ninjas are if they're hiding in the dark all the time) just before they get stabbed in the face, and "Totally Sweet Force of Ninjosity That Flips Out and Kills People" wouldn't fit in the name field for the Operation: Destiny database.

Being everywhere and nowhere at once, Holy Shit NINJAS can cause ninjas to jump out of hiding wherever it wants to. Since ninjas can hide anywhere, this makes life very dangerous for its enemies. Do not slight the essence of ninjosity, for it is quick to anger and will totally uppercut you if you even look at it funny.

Ninjosity is as dark and mysterious as it is awesome, and just being around ninjas will make you more stealthy. They can even bring the dead back to life by rocking out so hard their soul flies out of the afterlife and returns to their body so they can be in the presence of such badasses.

On the flip side, anyone opposing the real ultimate power will find themselves lost in shadows, afraid and crapping their pants before a bunch of ninjas come out and chop their heads off.

What do ninjas do when they're not cutting off heads or flipping out?

Most of their free time is spent flying, but some times they stab. (Ask Mark if you don't believe me.)

Shouldn't the plural of ninja be--

Holy Shit NINJAS is the Horseman of Ninjas, one of the primal scourges of humanity. It is said that, when the Legitimate Businessmen face their darkest hour, it will reappear in its full glory and totally rock everyone's faces.

This article is totally sweet and shouldn't be messed with unless you have something really important to say, or else ninjas might jump out of your closet and uppercut you through a window.