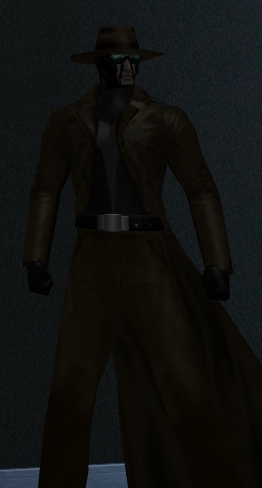 A rare picture of Joe, taken in a bunker underneath the Cromwell Estate
Not much is known of the man that refers to himself only by the pseudonym of "Joe". His surname is unknown. Whether his first name really is "Joe" is similarly unknown. All that is truly known of Joe is that he has acted as a liaison to several heroes and groups of heroes within Paragon City. He acts as their "eyes and ears", feeding them information from behind the scenes from his massive network of information. If Paragon were a religious city, Joe would be it's Oracle.

What little is known of Joe's history is made up almost entirely of myth and rumour. (Misinformation no doubt spread by Joe himself to make him hard to identify.) It is said he came to Paragon City back in 2001 in order to escape one of Americas more powerful mafia families. Which family in particular is unknown. His reasons for escaping them are, again, similarly unknown. Many have hypothesised that Joe used to actually work as an enforcer for the mafia in question. It would certainly go a long way to explaining his ability to network among the criminal underground.

Joe is completely mute. Not long after moving to Paragon City, Joe suffered a horrible injury to the throat after his first encounter with a gang of freakshow thugs. A complete civilian at the time, Joe was unable to fend them off, and the villains beat the poor man to within an inch of his life, severing his throat with their wicked clawed hands. Joe lived thanks to the intervention of the vigilante Charon. And while many other men would wallow in self-pity, the encounter lit a fire under Joe. There was too much crime in Paragon. Joe would do everything he could to put a stop to it.

Despite only being able to communicate with the written word, Joe established a small business fixing computers for the people of paragon. It started slow. But due to Joe's expertise with computers, he was soon in high demand. He branched out under several different fake names. Protecting his true identity not only from his customers, but from those that worked under him. Soon his empire was raking in copious amounts of money. Joe was making money...but his true motive was much more than such paltry things.

Every computer that Joe fixed, from family PC, to government supercomputer, was outfitted with a special monitoring device that allowed Joe to access them remotely. The boom in his business had meant that within two months he had remote access to 10% of the computers in Paragon City. The real jackpot came when a not-so-bright Crey Industries employee entered his store with a broken computer. While the computer itself was low key, it had within it the means for Joe to hack into Crey's extensive database of nearly every metahuman in Paragon City. Joe hit the jackpot. He knew everyone's strengths, weakness, and favorite food.

This information at his fingertips, Joe saught out the King's Row vigilante that had saved him; Charon. The two men had been injured by the crime in Paragon. One physically, one mentally. The two slowly became friends, or as close to friends as two damaged people can be. Joe joined the Bone Squad, and, under Charon's tutelage, would continue to fight the good fight in Paragon City.

This was in 2001. Three months after his arrival in Paragon. Since that time, nearly a decade later, Joe has worked with hundreds of heroes throughout the city. Most notably Charon, Xanatos, The Widowed, Makis, and The Defenders of Paragon.

Not long after meeting with Charon, the trace on Joe went dead. Around that time, a very wealthy Mafioso family in Chicago similarly wound up dead. The few that notice the connection worry about Joe's true motives. How much can we truly trust a man watching our every move?