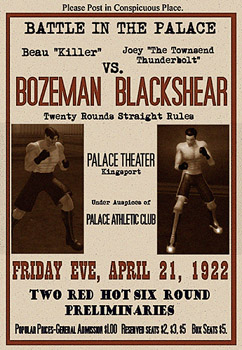 1922: Boxing poster from one of Joe's matches

1921 - Joe moves to Boston to further his boxing career. There he meets a fellow boxer named Samuel Keener, who would become his lifelong friend.

1923 - Joe's father goes undercover to help infiltrate the Boston branch of the Circle of Thorns (who, at the time, were masquerading as a harmless occult society). He appropriates a number of occult artifacts from the Circle, including the Crook of Mereneith, an ancient artifact that once belonged to an Egyptian priestess. Fascinated by the Crook, Joe's father secretly keeps it. Circle mystics attempt to break into the Blackshear home to retrieve it, but Joe's father drives them off. This incident prompts Joe to move back home to be close to his family.

April, 1924 - Circle of Thorns members again break into the Blackshear home in search of the Crook of Mereneith. They murder Joe's father, but Joe intervenes before they can escape. During the struggle Joe is wounded by a Thorn blade, but manages to wrest the Crook away from one of the mystics. The power of the artifact awakens, and on the spot Joe is granted the Blessing of Mereneith: the ability to use his own desire to protect his loved ones as a physical shield against his enemies. With the Thorn blades now barely able to penetrate his flesh, Joe easily pummels the mystics into submission. After this incident Joe begins to dream of a strange underground city, and of an Egyptian flail to match the Crook.

May, 1924 - Now mystically enhanced, Joe grows to a height of 6' 5" in a matter of weeks. Joe realizes that he cannot continue to fairly compete in the boxing ring. He chooses to retire. 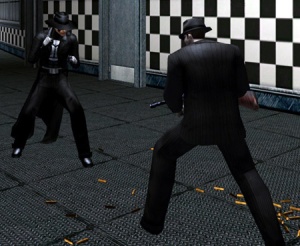 August, 1924 - Joe is approached by representatives of the Golden Hand, a small, professionally sponsored team of supers in Boston. Joe joins them. He initially uses his Townsend Thunderbolt ring name as a heroic moniker, but the super team's professional handlers later dub him the Hammer of Vengeance. As the Hammer Joe's outfit consists of a simple diamond mask, a long black coat, a wide brimmed black hat, and leather fighting gloves with reinforced knuckles. Backed by the Golden Hand, Joe takes on both street crime and the various Boston mobs.

1929 - Over the years Joe begins to wonder why the Golden Hand never goes after the powerful Gustin Gang or its leader, Frank Wallace. His investigations turn up a nasty truth: the Gustin Gang had long financed the Golden Hand, and was using it to eliminate its enemies. Joe attempts to confront Wallace, but he is assaulted by members of his own team, as well as mobsters led Johnny "Diamonds" Malone, Wallace's enormous enforcer. Unable to shoot or stab Joe to death, the mobsters attempt to drown him, but he is rescued by Sam Keener. 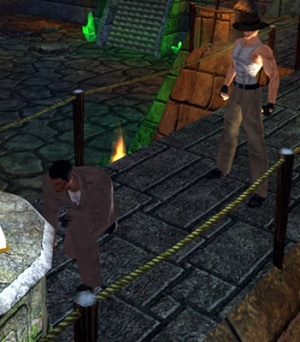 1930 - Now on the outs with the Golden Hand, Joe and his mother go into hiding, staying with Sam Keener and his family in Paragon City. Joe's strange dreams become much more vivid in Paragon, and he tells Sam about them. Sam suggests they attempt to find this underground city, and Joe agrees. A mystical voice from the Crook of Mereneith guides them onward, and beneath King's Row they find their way into the ancient city of Oranbega. Dodging the Circle mystics inhabiting the place they locate an altar holding an ancient Egyptian artifact: the Flail of Mereneith. Paired with the Crook, the Flail awakens in Joe the ability to channel the evil in the hearts of his enemies as a force he can use against them: the Shadow Soul Reflection power. The artifacts bless Sam as well, granting him similar abilities. The pair flee from Oranbega, and afterwards Joe's strange dreams cease. Additionally, within a few weeks Joe grows to a height of 6' 9". (Similarly, Sam grows from 5' 11" to 6' 7" in a month.) 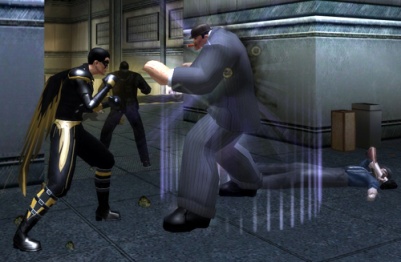 1931 - With his newly awakened powers Joe returns to the superheroic life, designing a new costume for himself. Sam joins Joe as his partner, but he thinks superhero names are silly (particularly Joe's, which becomes a source of constant repartee between the two) and refuses to call himself anything. Sam simply wears a mask and dark clothing to protect his identity and says very little. This works out well for Joe as rumors circulate that a mysterious spirit fights at his side. Over the course of 1931 Joe and Sam take down the corrupt Golden Hand as well as Johnny Diamonds. Frank Wallace eludes the pair but is assassinated by Italian gangsters in December, spelling the end of the Gustin Gang.

1932 - 1939 - Joe and Sam continue to fight crime in Paragon over the decade. In the meantime, Joe finally attends college as Sam finishes his doctorate in archeology. By the end of the decade both men realize that they do not appear to be aging. 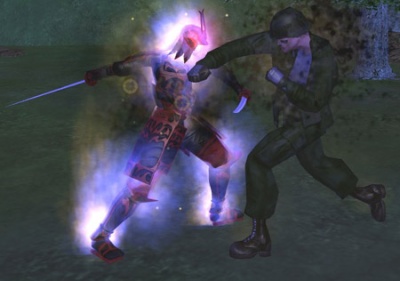 Guadalcanal, 1942: Joe takes on a superpowered warrior of the Imperial Wind

1941 - On December 7 German forces attack Paragon. Joe and Sam mobilize as part of the response, arriving alongside the Freedom Corps, but there was little fighting left. After the attack the United States declares war on the Axis powers, and Joe and Sam both volunteer for service. Government lackeys attempt to recruit Joe into the First Hero Brigade, suggesting a new costume for him and the title "General Justice." On Sam's advice Joe instead joins the Marine Corps as a regular enlisted man, going by his real name. The war separates Joe and Sam; Sam is sent to Europe with the 92nd Infantry Division, while Joe joins the 2nd Marine Raider Battalion in the Pacific. He sees action at Makin, Guadalcanal, and Tarawa. Towards the end of the war Joe transfers to the 2nd Battalion, 1st Marines and fights in the Battles of Peleliu and Okinawa. Throughout the war Joe clashes many times with members of the Imperial Wind, Japan's corps of military supers.

1945 - After the war Joe returns to Paragon, where he marries Betsy Holbrook, a USO performer he met on R&R during the war. He and Sam Keener continue to fight crime in the city over the next two decades. At first Joe returns to his Vengeance Hammer moniker, but after repeated ribbing from Sam he reverts to his real name.

1967 - Joe's wife Betsy is killed in a car crash. After a period of mourning Joe reflects on his life and decides he needs a break from crime fighting. Joe finds himself developing an interest in the counterculture of the period, and eventually chooses to crusade alongside them in the quest for peace and civil rights. Joe gets heavily into the music of the era and in the following years even works security for big names like Cream, the Who, and the Rolling Stones.

1982 - As the years roll by Joe finds himself growing increasingly antsy and action-starved. He considers returning to the heroic life, but instead decides to follow in his father's footsteps and become a police officer. The fact that he is technically 79 years old raises more than a few eyebrows, but the PPD still snap him up without question. Joe finds that he rather enjoys busting muggers in Atlas Park. He is also invited by the government to tour Asia in the late 80's with other surviving WWII veterans, a sojourn he very thoroughly enjoys. In the mid 90's Joe is transferred to Galaxy City, where he walked a beat until its destruction in late 2011.

Since the 80's Joe has been known as Officer Blackshear to most people: a respected veteran of the force. He has not physically aged since the 1920's, although his hair has turned white. He was been happy enough with his life, but one day, rather on a whim, he found himself in the attic, looking over his old costume. It was in sad shape; forty years of neglect hadn't done it any good. At that moment Joe felt acutely how much his own powers had atrophied, and all of a sudden he knew what he had to do.

Joe sent his old costume to Icon to be restored, and once that was done he marched into City Hall and filled out his hero registration. Before the afternoon was out Joe was running missions for Gregor Richardson in the MAGI office, and he knew he was back in action. His powers have waned over the past four decades, but they seem to be reawakening quickly. Joe has retired from the PPD to focus on hero work full time.

Joe is a dark melee / willpower scrapper. His dark melee is played as boxing strengthened by his Shadow Soul Reflection ability; essentially it draws power from the evil of the criminals Joe faces. If Joe were ever to misuse this power it would turn on him and consume him. His willpower is played as the Blessing of Mereneith, and is literally the power of goodness and mercy formed into a protective shield. Again, if Joe were to misuse this power it would be lethal, as would leave him immediately, and the ravages of age would catch up with him all at once.

Joe is also active in the Rogue Isles, doing his part to help out the civilians there. The people of the Isles don't have a lot of hero coverage, so Joe does what he can to help them out. He has to get his hands a little dirty sometimes, operating in the Isles, but to him it's worth it.

An idealist in his youth, Joe has seen a lot, but he's never let it drag him down. There is no shortage of horror and evil in the world, but there's also a lot more good than people seem willing to admit to. The bad stuff captures our imaginations better and thus it gets more press, but there is also charity, love, and mercy in the world. In fact, without these forces our society would have collapsed into chaos long ago.

Joe is best described as a jaded optimist; he scoffs at the idea of "the good old days" but kind of pines for them all the same. People were no more merciful back then, nor were they less corrupt, but it really was a simpler time. Joe has never lost his sense of purpose, however, or his love of excitement, for that matter.

This toon is based on an old Champions (i.e. tabletop, not CO) character of mine; his backstory was developed over many years and his personality is well fleshed out in my mind. I'm pleased to have this version of him on the Virtue server, where I can run him with good roleplayers. I tried my best to keep his extensive backstory minimal on this page; I'm not sure how well I succeeded, but there is actually a great deal more developed material (particularly concerning the artifacts of Mereneith and their history). This page is clearly long enough, however.

I realize that re: game history nobody got into Oranbega before the Rikti invasion. The way I see it Joe and Sam were able to find it because the crook was mystically connected to its fellow artifact and led them to it. After the flail was recovered Joe and Sam were unable to find their way back to the Circle's city.

As a sidenote, the pictures of Joe's past are not meant to be photographs, but illustrations. For anyone interested, however, the first real world color photograph was taken in 1861. Color photography has been around awhile, it just wasn't used extensively until the latter half of the 20th century.

Joe's really old and he's done a bunch of stuff.