Juggertha was created by Ed Foychuk in early 2005. He has been the subject of numerous fan-art pieces and has grown into one of the most popular characters of the game City of Heroes

With the air of a God and the blood-lust of a shark, Juggertha has little time for making friends or gaining allies. Those that stand with him on the battlefield know him best - he is the one that cuts down the enemy. Nothing else matters to him.

Juggertha posses unearthly strength enabling him to lift/press in excess of 100 tons. He uses this strength in a variety of manners, but most involve close quarter combat.

He is a practiced hand-to-hand combatant and can stand with anyone of his power level for weeks on end in a confrontation. He has exceptional endurance and never seems to tire in combat (it is suspected that he actually draws energy from the fray).

Although he wears armor, if is believed that it is only for show. His skin itself is near invulnerable and has yet to be punctured. While he has been harmed, it has usually been due to massive blunt trauma or some extra-worldly powers.

Juggertha wields an axe of unknown origin. He seems to be able to conjure it at will and rid himself of it just as easily. The axe has been recorded as being able to cut through re-enforced steel.

While Juggertha cannot fly, he is able to leap great distances. No actual limit has been recorded.

When the one known as Juggertha began is unknown. He has always been. To the Norse, he was Juggerse - the Fury of the Wind. To the Egyptians, he was Juggerthine - the bringer of heads. To the Greeks he was Junnanos - the keeper of the axe and gate. The Romans call to him as Junno, the force that no man may stop. Modern day vocabulary does him little justice though. He is a Juggernaut; an unstoppable force. Yet at the same time he is the Guardian; the immovable object. He is both, yet neither. So now he is Juggertha - that which cannot die.

He has seen a thousand battles and lived through all of them. No one knows why. It is said that thousands of years ago he was a normal man, but that a pact has led him to this point. A pact that left his body invulnerable but his soul forever dying.

Just as his eyes have clouded over, so has any hope of redemption. Now, there is only blood. Blood to spill. A weight to carry.

Although not directly tied to the Marvel Universe, Juggertha has been seen on occasion brawling with a number of their top headliners. 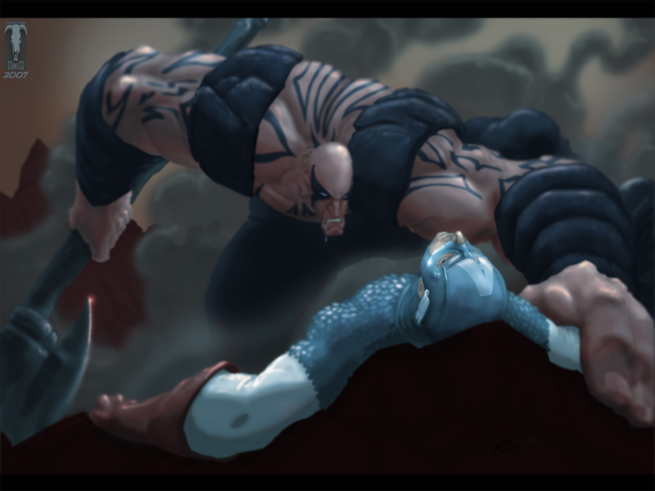 This link has nothing to do with Juggertha. Really.