At what point, one must ask, does form define function? Some Evolved are granted the means to tear apart the sun, to tangle with the powers of the atom, to incarnate the dead and to collapse the minds of those around them. They are new gods, and they are to be feared.

What of those, however, to whom the lot falls to simply go unnoticed?

Kameleon is a shapeshifter; a simple term that does not even begin to cover the depth of her powers. Kameleon can, in short-term bursts, prompt a full cellular revolution of her body, provoking her entire frame to undergo what could be years of development and growth. She doesn't 'change' her cells; she is no octopus or chameleon, using chromataphores under the skin to fake a colour, using flattened scales to mime a texture. No, when Kameleon changes, she changes; her body wholesale changes its structure, all at the behest of her unconscious mind.

Kameleon's powers are amazingly oblative at defending her from detection. First, because her powers work by whole-body cellular generation, rather than by 'faking' an appearance shift, her blood type, DNA, natural hair colour, and external tissues and fluids are all different to her own 'core' design. She smells like the subject she's impersonating, could pass for them on a blood test[1], and her voice sounds the same as well. Kameleon is a constantly operating, constantly regenerating biological engine, provoking wave after wave of evolution in image. In addition to this, because Kameleon's powers operate very aggressively and in short bursts of active mutant activity, when she is not actively using her powers, she looks - to a device designed to recognize this and to mutants capable of examining it - like a completely normal human.

Kameleon's powers don't just extend to the shape of her own body; in addition to changing her gender and her appearance at whatever whim seizes her, Kameleon can even generate clothes. Analysis has confirmed that these clothes are actually keratin, the offcuts of her 'last' evolution. Simply put, the cells of her last appearance rearrange themselves into the clothes (or scales, or fur) of her next appearance. The process is very similar to a snake shedding its skin, and has the virtue that Kameleon is only a single shapeshift away from disposing of protein markers, tracking paint, or dermal implants.

Kameleon's evolution is classified a Conscious Active evolution. That is to say, her abilities are managed primarily by her subconscious mind, but only at the behest of her conscious mind. She does not have to sculpt her face and features perfectly to resemble something; she does not have to consciously choose an outfit, to understand how it fits together. Her subconscious handles the logistics, and makes an outfit that 'looks' like what she wants, and crafts it to the right colour and texture[2].

Kameleon's powers would be of minimal use to her, however, were she not backing them up with a surfeit of distinct skill. Simply being able to look the part isn't enough - to truly take advantage of her powers, Kameleon has honed a con-man's skills to a razor point. 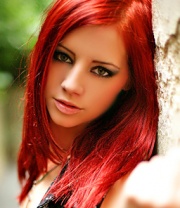 The sort of appearance Kam would take around friends and associates

Kameleon has a good eye for detail, and an alert mind. Pushing normal human perception to a fine point by her training and practice, Kameleon has a good grasp of social behaviour. Thanks to having spent a lot of time watching people and understanding how they work, Kameleon has developed a library of habits and personalities that she can draw upon and synthesise together to create a whole new person every time. This kind of practical psychology has given her a remarkable grasp of impersonation, and yet, she rarely impersonates anyone.

Kameleon's powers are used instead in the much more artful method of the con-man. Kameleon takes on the guise of novices, assistants, aides and secretaries, temps and guards, all in aid of whatever goal has taken her fancy. It can be noted that while the guises she uses around friends can be distinctive and striking, most of those personas she uses in her day-to-day work are boring, bland, and lacking in any remarkable characteristics.

Experience in a variety of criminal pursuits - the finest being burglary - has given her patience and cunning in spades. She knows how to wait, and she knows how to act once the waiting is over. Kameleon's powers do not serve her at all against Guard sensors and psychic detection - which means that the craft of burglary she uses against them is all the more refined.

All art is manipulation.

Kameleon is an artist; She has no need to work, so she has no desire to do so. She can simply get by on whatever she wants, and therefore, everything she does, she chooses to do. For an individual to whom everything in life has come easily, there are two possible directions to go. One could become focused on greater and greater challenges, or, one could take the path of the artist.

Kameleon's body and her work are both done entirely as works of art. Kameleon wants to be seen for not being seen. Her deeds are remarkable and amazing, and therefore, she is compelled to sign them. When she blends into an environment, she does not do so by being a dumpy, ugly, odious and smelly person; instead she takes a form that is aesthetically pleasant, but not so pleasant as to stick in the memory. Yet, she always signs her work. There is always some sign, some secret that the truly astute could notice.

Kameleon likes to pretend she 'plays fair' with the authorities. She leaves enough of a note, enough of a hint around a scene, that anyone who had seen all her other works could compose the clues and realise the connection. Of course, she's so good at hiding, and has such a mind for puzzles that the connections are often unnoticed, and her crimes are filed as unconnected.

Kameleon is a collector. She does not simply take things for their value, sell them, and save the money. She can have money if she wants it. Therefore, for an activity to fill her heart with interest, to actually engage her mind, the reward has to be great. There has to be some point, some meaning. She ultimately treats every heist, every theft, as part of this great artwork. Some have witnessed this - Battlebriar has routinely expressed awe at the intricacies of her plots to relieve people of information, seeing the message in the method - but by and large, the only person who sees the art in its completness is Kameleon herself. She smugly enjoys her state as a artist grande, and it is this 'effort-light' behaviour that permeates her relationships.

Kameleon is a very reptilian person; she weighs up the value of risk and reward, and if the values do not line up in her favour, she dismisses it wholesale. This can make relationships with her difficult - she does not want a rollercoaster of highs and lows; she wants something good, and she doesn't want to work too hard for it. This is not actually a big ask - but in many cases, Kam has found the intensity with which some people pursue mere contentment to be both bothersome and creepy.

Kameleon seeks the ultimate heist. She wants to steal something enormous, something expensive, something well guarded... and then have nobody notice that it is gone. This would be her masterpiece; her greatest artwork, with its audience of one.