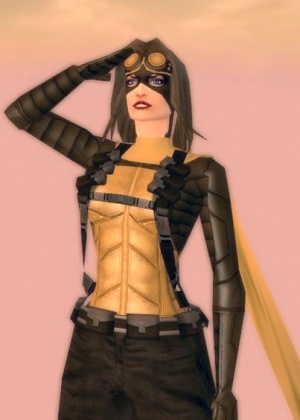 If I was in World War 2 they'd call me Spitfire.

Kinetic was inspired primarily by my desire to roll a golden age style hero.

Born in New York City before the turn of the century to a poor family Charize had an otherwise unremarkable childhood. At the tender age of 11 she began to develop destructive powers. Mutations, at this time were a mysterious and relatively new phenomena, and unfortunately the young Charize would count herself as one of the very first mutants.

Her parents were both frightened, and unsure what to do with their daughter with her quickly burdgeoning ability to create fire found themselves distancing themselves from their child, consider a bad omen. Much to their relief a man, claiming to be from the US military arrived not long after Charize's first public display, setting a neighbor boy on fire when he threatened her brother. Barius offered to take Charize and place her into a new special military program. Her parents quickly agreed and Charize was whisked way, never to see her family again.

Barius Armstrong, an official with the US Military, was the mastermind behind one of the military's newest initiative, Project Homestead. Project Homestead was tasked with the goal of recruiting and training people with extraordinary skill and ability. These new recruits would form a team designed specifically to combat newer and more exotic threats to national sovereignty.

Beginning with over 40 potential candidates, the Project Homestead hopefuls were slowly whittled down to a handful. Charize was one of that handful to continue her training. Even with concern for her inability to completely control her destructive power, the raw potential was too much for the military to pass up. Often awkward, and emotional, Charize was a quiet observant teenager at most times. However the constant training and pressure led her to frustration and anger, bringing her powers to dangerous outbursts more then once.

Her teammates were a rag tag bunch, but she quickly found herself becoming friends with the roguishly charming Marcus Trite, two years her senior. They were an unlikely pair, but Marcus had a personality that was almost contagious. It was also his real world experience and determination that inspired Charize to continue trying even as her own resolve became worn down.

Marcus had been an orphan on the streets of New York City. He was also an extraordinary human being, and would become the center of the early studies of Dr. Ernest Azarcon into a gene he had dubbed the "mars gene". Marcus was classified as an "excel-human".

Marcus possesses naturally advanced abilities; Intelligence, Strength, Stamina and Speed. His body is perfectly built for peak physical performance, able to combat fatigue and recover faster. Aside from even the impressive physical feats Marcus was bright. Able to learn even some of the most complex systems and concepts with minimal tutoring, he was a strategic genuis the likes the world rarely ever saw.

It was Marcus who helped Charize learn to control and focus her powers. Visualizing was the key, creating a mental image of what she wanted to do, and it had a stunning impact. From struggling to keep her powers within a prescribed radius to suddenly having almost pin point accuracy, Charize latched on quickly to her unique skill at mental multi-tasking.

The soon to be Daring Aces trained for over 10 years and participated in several military operations and exercises. They were a specialized 5 man team, focused primarily on tracking the movements of the Prussian Toymaker and his operations.

Gifted tactical strategist with extra-human stamina, strength and agility, Marcus quickly became the default team leader. His own surety in the strategies he develops is his Achilles heel, and often he can become very self involved in his own thoughts and ideas and forget to ask for the opinion of his team.

A pyrokinetic, known for devastating abilities with fire and pure kinetic forces, she is able to control and manipulate many targets at once. She is however, weak to direct attacks and mental manipulation due to the level of focus needed to control her powers. Charize quickly became the grounding voice for Marcus during operations often able to reach him when he was unable to see a developing situation out of the scope of his original plan. She would later receive the name the Kinetic Spitfire during World War I.

A Russian immigrant and a veritable mountain, he possesses a will of steel and strength greater then a team of 12 workhorses. He was the reigning champ on the underground boxing circuit, however his temper often gets the better of him, and its only the guidance of the Patriot and the other team members that keeps the unstoppable Russian on track.

Possessing uncanny and remarkable Marksmanship, it's said there wasn't a better shot in the west then the son of oil tycoon Bill Gunston Sr.. Born and raised with a gun in his hand Will Gunston is a bit of an egotistical hothead often unable to see his own faults. An unrepentant ladies man with a bit of a gambling problem, it was his daddy's money that got him on the team. But even Marcus can't argue his skill with a gun, or two. Baby sitting him however can often be a second job in and of itself.

A pure empathic/telepath unlike Charize, Beatrice spent the majority of her young life in facilities unable to block out the overwhelming thoughts and emotions of others. Once thought to be a paranoid schizophrenic she was trained under the careful eye of another telepath in using her powers to directly support her teammates by boosting their will, clearing their sight and easing their pain. Offensively she learned to directly assault the mind of her opponents, inflicting pain, temporary vision loss and emotional uncertainty. However due to her long years in facilities she is quite fragile and as a result she relies heavily for defensive support from the team.

As their operations began to increase in importance and scope Barius brought them into the fold within the Midnight Club. It was within the hallowed halls of the Midnight Club that the team leaned their true purpose, to track and learn the goals of and potentially capture the threat of a Prussian Toymaker now code named "Nemesis". It was during the civil war that he had begun his infiltration into the United States mostly unnoticed.

Unnoticed that is by all but a small but growing group of secretive researchers who began to see his manipulations at play. It was at that time that they began manipulations of their own, beginning the formation of the Daring Aces and other groups to stand against his growing threat while building their own numbers.

Kinetic acted admirably during World War I, and in operations after. She earned her new callsign the Kinetic Spitfire and the Daring Aces became media darlings and a beacon of hope along side other heroes of the time.

Her most important role came however on VE Day, May 8, 1945. As the heroes defeated the robotic decoy of Nemesis in the capitol, Charize was tracking the true mastermind. Unfortunately for her Nemesis was on to his tail and sent her spirally into the time stream with him. Charize found herself lost in the swirl of time. Believed to be dead her team would continue on, and the world mourned her loss leaving her and her team to the dusty pages of history.

Luck would remain with her however, and she would find herself saved by random chance by the Dark Watcher, on his own journey through the ebb of time. Arriving back in Paragon in the current day, Charize finds herself in a completely different time and place. Everyone she knew is gone, her team no longer exists, and her only tenuous connections remaining are the Midnight Squad.

Charize has a fairly friendly personality, though she finds herself confused a lot lately with the vast change in time periods. As a general rule she avoids speaking about her personal life and continues to keep her identity secret. She often also finds herself at odds with those who believe she's merely copying the iconic historic hero, but she believes strongly in continuing the good fight and minds her time generally focusing on what needs to be done.

Inherent ability to control and bend energy in a violent fashion with her mind. Using fire she is able to control her enemies, caging and cornering them in flames and slowly depriving them of oxygen.

Along the same lines as her pyrokinetic ability, Charize is able to control raw kinetic energy with but a thought, able to both increase and decrease the efficiency of energy use in those around her. She's also able to use this power to unlock the energy of one person to transfer it to another.

Due to her control of raw kinetic energy, Charize ages very slowly. Even without her long time in the time streams, Charize had only aged a few years in appearance during the almost 50 years she had been alive.