Micay was a typical Incan girl. She helped her Mom grind the corn into meal, she helped keep their house clean and listened to her Poppa. Her father was a War Priest for the city, and a well respected man. One day for her birthday, her father gave her a doll that he had made with rope, rags and large seeds. She loved that doll and called her “Loca”, which had no meaning, but was a nice friendly sounding name.

Then one day the white man came. These men were called “Spaniards”, and at first they seemed nice, but then things began to change.

The Spanish Conquistadors that had come to Micay’s city had brought with them the plague of smallpox. It was not long after their arrival that Micay lost her mother to smallpox and soon the city was riddled with plague.

Her father went to war with the Spaniards and was killed. Micay was now an orphan, and to make matters worse she could feel herself getting sick as well. She knew she did not have very long to live.

With no family left and with smallpox eating away at her health she volunteered to be sacrificed to the Incan Sun God. She hoped that her sacrifice would end the dreadful smallpox plague that has been brought upon her city. Micay was very brave during the ceremony of her death, but made an angry prayer to the Sun God for revenge.

Her prayer was answered, and just before she was killed, her soul was transferred into Loca - (the tiny rag doll that was her favorite toy and only remaining companion). Her soul remained in that rag doll for centuries. With each passing year she became increasingly bitter as she witnessed her great Incan culture fade into obscurity.

The doll was found by an archeological team many years later and brought to a museum in Quinto, Ecuador as an artifact of the great Inca Empire. The proximity to the other Incan artifacts gave Micay’s soul strength, and she was confident one day she could return to Earth in mortal form.

One day, a young girl named Carmen Fria, was visiting the museum with her Poppa. Carmen was born in Ecuador, but her complexion was fair, as she was a direct descendent of the Spanish Conquistadors. She spotted Loca in the museum’s display and could not resist the very old, but extremely curious rag doll. She slipped under the ropes that guarded the display, and walked up to give the Loca doll a hug. Micay’s spirit seized this opportunity to transfer her soul into Carmen’s body.

Unfortunately for both girls, two souls now occupied the same body. To make matters worse, both of them were ancestral enemies. One was an Incan, and the other a direct descendent of Spanish Conquistadors. This bizarre conjunction of history and magic raised the ire of the gods that their ancestors served. Each culture hated the other - each blamed the other for the child’s splintered soul. The gods on both sides bequeathed her with fantastic powers, and then waged war with one another within her body.

In reaction to the conflict within her body, Carmen/Micay constantly mutilates and harms herself. She develops bruises all over her body from the physical beatings that Carmen and Micay exact on each other. Her strange psychic powers begin to augment further and each personality tries to purge the other from her soul.

Eventually, her internal battles spill over to the outside world. Using her ability to manipulate and read the minds of others, strange things happen in her presence. Innocent people are killed or seem to do strange and evil things when they are around her.

She is finally incarcerated and then committed to the care and treatment of the world’s leading expert on paranormal psychology: Doctor North.

Dr. North is a super-hero, with a psychiatric degree that specializes in the psycho analysis of super heroes and super villains. He is put in charge of caring for Carmen/Micay.

North discovers both physical and spiritual therapy that helps keep Carmen/Micay stay in-balance. For many years during North’s therapy Carmen/Micay leads a fairly normal life, however her “normal” life comes at a price.

To aid in her therapy she must spend her life in a large prison cell which acts as cerebral tranquilizer. This allows Dr. North to study her, and to talk to both personalities residing within her. Progress is made, and Dr. North is hopeful one day Carmen/Micay can be released.

Then one day Doctor North disappears. The disappearance means North is no longer around to maintain Carmen/Micay’s cerebral tranquilizer. The loss of power in the tranquilizer cell allows her to go free.

With new found freedom, Carmen/Micay attempts to keep her split-personality balanced, and for the most part succeeds. However she is caught by a “super hero” group named Freedom Corps and relegated to prison under the accusation that she had something to do with Dr. North’s disappearance. She is sent to prison, with no chance of bail, while she awaits her trial.

Arachnos, a sinister organization bent on the destruction of Freedom Corps, breaks into prison to free Carmen/Micay.

Angry at her imprisonment and slowly losing the growing conflict in her soul, Carmen/Micay’s disposition has turned evil again. With the aid of Arachnos, she develops the persona of a new super-villain.

She plays with her duality by wearing a bright black and white costume that “splits” her face in half with each contrasting color. She gives herself the name “Loca” which was the name of the rag doll and also coincidentally the Spanish word for “crazy”.

The European and Incan spirits within her, now openly feud all the time, and Loca’s personality becomes highly volatile and predictable. 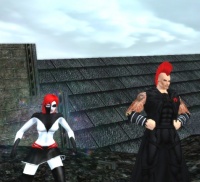 Chaos Red and Loca on their first mission together.

Shortly after the prison-break, Loca teams up with Chaos Red (another associate of Dr. North’s that is blamed for his disappearance). They are both currently on a crime-spree to raise the money and increase their personal powers so they can solve the mystery of North’s disappearance.

Both Micay and Carmen have grown attached to Chaos Red, and both of them have subdued their internal conflict in order to compete for Chaos Red’s love and attention. Chaos Red, an intelligent but emotionally stunted street-punk is oblivious to much of Loca’s duality and inner-conflict and thinks Loca is “just a crazy chick, with a great body and a nasty temper”.

Loca is currently involved in mercenary missions for Matthew Burke. She has begun to enjoy her new life as a super-villain. It is possible that Loca’s plans may become increasingly more perverse as her power grows and her psyche deteriorates.

Loca is split down the middle. She has two souls within her competing for dominance over the other, and both of them are competing for the affection of a young street punk named Chaos Red. The two personalities within her are:

Carmen was an innocent child, probably destined to a happy life of wealth and comfort, until she unwittingly unleashed the spirit within the Loca doll. Carmen has fair skin and brown eyes.

Carmen’s primary personality traits are jealousy, impetuous behavior, and at times, a cold disposition. Carmen however is extremely intelligent, and can often use logic and deduction to solve complex problems.

When the Carmen side of Loca’s personality is speaking, she often slouches and is less self-assured. Carmen has a slight Spanish accent, and tends to speak in elaborate sentences, but can appear to be emotionally distant.

Micay of the Tinsuya Tribe – A young Incan girl, descended from a famous War Priest that died in the war with the Spanish invaders.

Micay has dark skin and lovely green eyes. She was an innocent child, destined to a happy life in her Incan city, until her parents were killed by Spanish conquerors. Micay was then sacrificed to the Sun God, in hopes to appeal to the gods and ask them to invoke revenge against the Spaniards.

Micay’s traits are impetuous anger, lust, and elaborate schemes that often prey on the victim’s emotions. Micay is often too emotional for the subtle application of logic. However, Micay is great at deceit, seduction and has more charisma than Carmen.

When the Micay side is speaking or dominant, she tends to stand tall. Micay tends to speak in short choppy sentences and can be clumsy with language.

In general, Carmen is the more logical and verbally skilled personality but is prone to emotional weakness, such as despair, infatuation and jealousy. Micay is emotionally stronger, and much more charming, but often lacks the verbal and academic skills to solve complicated problems.

The two personalities work together in tandem only in the rarest of situations, and usually such cooperation has disastrous effects on her mental and physical health. Also at times, external magical forces will push her into conflict with herself, and on these occasions she will hurt herself, or physically fight with herself as the two personalities wage war with one another.

Neither side is more dominant than the other, both sides dislike the other and both sides tend to criticize or mock the other side of Loca’s personality.

Tyranno has recently hired Loca to kill Dr. Jade. She was selected by Tyranno when he learned of Loca's superb talents via their mutual associate: Matthew Burke.

((Nobody other than Tyranno and Loca is currently aware of this situation.))

Chaos Red and Loca continue to partner on several mercenary missions. They have recently moved into Port Oakes and are picking up random mercenary work in this area. Their most recent accomplishment involved them stopping a renegade known as Biopulse from defecting over to Longbow.

Loca is clearly the classic “split personality” type, with a historical twist, as her character is deeply embedded in the colonization of Ecuador, Peru and the rest of the Incan empire.

Carmen’s personality is taken largely from the real-life persona of Frida Kahlo, (portrayed so brilliantly Salma Hayek in the film Frida). Frida is a strong and intelligent artist, plagued by tragedy and handicaps. She is prone to emotional weakness and self-doubt, but is more cunning and capable than many give her credit for.

Micay’s personality will mirror that of Bette Davis. Bette’s depiction of Margo Channing in ‘All About Eve’, will have a direct influence. Also Micay’s tragic story will pay some homage to Bette Davis’ role in Dark Victory. In general, the scheming, self-centered vamp (that sometimes lack on the logical, academic side), that Bette Davis portrayed so well, will be at the heart of Micay’s personality.