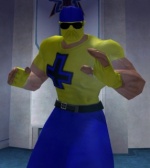 "Duggy McFresh, a one-time Hellion drug dealer who now dedicates his life to the protection of the cities streets. His life was turned around when a hero known as "Xanatos" saved him in the middle of a gang war. Adopting and modifying the image of the hero that saved him, Duggy tries to bring some semblance of "street-cred" to the heroes of the city."

MC Xanatos died in 2012 at the hands of Rularuu, in an event that has become known as "The Battle for the Multiverse".