Manny Mannerson was born on April 21, 1982 in Port-de-Paix, Haiti, before his family moved to Orlando, FL with his sister, Marina Mannerson[1]. In a remarkable twist of fate, he lived a fairly ordinary life, excelling in chemistry, geology and biology in high school. This studiousness on his part helped him greatly when he applied for, and was accepted to, Brown University in Providence, RI.

While at Brown University, Manny took up studies in the relatively new field of Metahuman Studies. However, he found himself frustrated by many of his peers' actions which included, but were not limited to, involving themselves in science "accidents" in order to gain superpowers, crafting a set of integrated nanomachines to multiply their strength, speed, and agility or performing radical retroviral gene therapy to combine their DNA with that of other, more dangerous creatures. Preparing a thesis on superhuman ability through intense training, Manny bet his colleagues that he could obtain a natural ability (which everyone would mistake for a supernatural ability) without cheating[2].

His search for this ability took him to a Himalayan mountain temple, where he convinced[3] the sole practitioner of an ancient art that would enable him to create ice and control weather to teach it to him. While his newfound ability to absorb heat to generate these effects left him casually dressed in the Himalayas, he found that he was unable to use it in more temperate areas while wearing clothing, lest they burst into flame. This left him with the rather unpleasant option of running around fighting crime in his underpants (which became a less terrible decision once Manny noticed what many of Paragon City's other heroes were wearing), and leading him to tattoo a large 'M' on his chest in lieu of a symbol stitched onto tights.

After collecting on his bet, Manny decided to fight crime in Paragon City[4], quickly making a name for himself by displaying abilities not normally associated with unmutated, nonmagical, technology-free humans who have not been involved in scientific accidents and provoking new depths of study into the properties of muscle-brain interactions.

He is currently registered in the supergroup The Circle of Jerks, whose team of lawyers has helped him obtain and hold the world record for "not guilty" verdicts in trials for public indecency.

A nearly-essential requirement for becoming a member of The Circle of Jerks is being able to see beyond the veil of reality. Yes, those are pixels, polygons, textures, and none of this is real. Some people don't like being told their pretend world is just that, and throw hissy fits when Jerks like Male Man make references and jokes that quite clearly break the fourth wall.

As you can tell, the same fourth wall-breaking principle is being applied to this very article. Such is our ways. 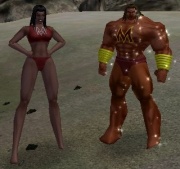 Male Man has no sidekicks. Rumors of a "Male Girl" are completely unfounded and should not be taken into account.

Are you a manly enough man to improve this page?