< Opposite Reaction
Jump to: navigation, search

"For every criminal action, there's an equal and opposite reaction of justice. That's me."

In a City of Heroes, for every caped crusader and scheming villain, there are also the men and women in blue who do their very best to protect and serve. Armed with no super powers of their own, they do everything they can, let the capes do their thing, and be grateful when they are able to safely make it back home every night.

And then there are those who dare to dream.

I'm Not Afraid To Fall

Of course, it would all start with superheroics.

John Newton was the latest in a long family line of beat cops, assigned to cleanup at a break-in and cape-on-villain fight at Paragon University. Irene Kandiecki was a genius physics graduate who had been caught in the crossfire. He took her statement and they took each others' hearts. In time, they married and decided to start a family. Irene called dibs on naming their first-born daughter, John hoped he would have a son to raise as the next Newton to join the PPD. In the end, Isabella Newton was born to a very smug and geeky mother.

From an early age, the Newtons realized they had a very precocious child on their hands. Isabella had a motor that wouldn't quit, an unbridled energy and curiosity that her parents knew they had to focus instead of try to rein in. It was John who took charge, teaching his daughter that there were no limits to what she could do. This was Paragon City after all, and if Marcus Cole could focus his 'inner will' or Raymond Keyes could whip up a supersuit, then anything really was possible. All she had to do was do her very best.

Fortunately, Isabella grew up strong, athletic, and fairly brilliant, with eager parents willing to let her explore as much of the world as she wanted. She would watch soaps with her mom and action films with her dad. She would play with dolls and help dad with repairing the car. She took dance lessons and martial arts courses. Her parents only wanted her to be whoever she wanted to be. Which didn't prevent them from being completely floored when she went to football tryouts as linebacker - and nearly won herself a roster spot.

The family's suburb was lucky, it would remain untouched through the war. John and Irene, however, lost more than a few friends, including several officers and capes. As news broke of the Omega Team's sacrifice, a teenaged Isabella lied in her bed and thought of her father telling her anything was possible. More than ever, the city needed protectors. If she didn't have mutant powers or hidden magical abilities or a science lab wasn't going to drop on her head, then there was one way for her to make a difference: She too was going to become a cop. Not just any cop, either, she was going to be the best police officer Paragon had ever seen. Just like Blue Steel or those cops in her dad's favorite movies, only with less 'on the edge'.

In the ensuing years, as it turned out she really didn't have any powers to note, Isabella fixated more and more on her studies and athletics. She hung out with her father more, learning everything she could about police work. Her parents were skeptical and cautious, with good reason, but they both realized they couldn't just tell her 'no'. It was her life, and if she wanted to make a difference, then it was her choice. When she graduated high school, she went straight to the university to take up an associate's degree in criminal justice, and after that it was the Paragon Police Academy. When she graduated with top honors, the sky seemed to be the limit. Which is exactly when she found the glass ceiling.

The Paragon patrol force was 99% male, save for the occasional Officer Pello. Not to mention that the higher ups in the PPD recognized Isabella's inquisitiveness and unlimited enthusiasm and feared the reaction the force would have in dealing with a female Blue Steel wannabe. So they quietly shuffled her off to Parking Violations to 'learn the ropes', and in a few years, maybe, she would get a beat of her own.

What they didn't recognize is that when Isabella hears 'no,' it registers to her as 'yes, by other means.' She was taught to always do her best and aim for the stars, after all. So she eagerly reported to her new assignment, proudly took her badge and ticket book, and set out to go keep the streets of Paragon safe from illegal parking. She came back several hours later, an old and battered riot shield in one hand, and a young and battered Hellion lieutenant in the other. The perp had multiple unpaid parking violations to his name, she was bringing him in to make restitution. If the detectives wanted to ask him a few questions too, they could have him when she was finished.

So it went for a month, Paragon City's lower criminal elements finding themselves confronted by the sins of their parking past. Isabella was a one meter maid wrecking crew, dutifully tagging expired meters in between tagging Hellions and Skulls.

To her immediate superiors, she was a growing headache. To the Paragon PD's public relations department, however, she was something entirely different. At their urging, Isabella went to City Hall and registered as a hero. It was her mother's suggestion to take the play on her name to the next level, though it took a while of finding 'First Law', 'Third Law', and 'Newton's Law' all rejected before taking up 'Opposite Reaction'. Not that Isabella minded, it would make for an awesome movie title. Now she was more than just a meter maid, she was now a shining example to the people of Paragon of what their tax dollars could really accomplish.

Not that Isabella cared. Her dream was in her hands now.

I'm Fine And Dandy With The Me Inside 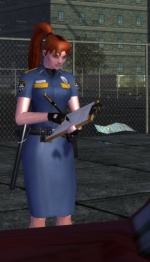 Isabella is twenty-one going on sixteen, a woman with five gears and no neutral when it comes to everything she puts her mind to: Her police work, her soccer league, her social life, her train of thoughts, her attention span, her mouth... Suffice it to say, she never needs a bottle of Five-Hour Energy. Even when she's staying still, she's still seemingly always in motion, talking, gesturing, talking, eyes darting as she takes in everything, and lots more talking. She has an inner voice, its just that her outer voice never lets it get a word in edgewise. She only seems to stop when she's asleep, and its never been confirmed that she actually does sleep.

For all that energy, Issy does keep it focused when she needs to. She's a dutiful to a fault, even when she's in between fights with giant robots from alternate worlds, she'll still stop to check for expired meters. She's also quiet perceptive when it comes to solving crimes, she might not be Sherlock Holmes but she's definitely smarter than the average bear - and crook. Issy knows the parking law book front to back, and even bits of the other books as well. You do the crime, you do the time - or pay the fine. Not that she keeps them strictly, she's here to protect and serve and not have a stick up her posterior about it. She's already let the Clockwork King off on Penny Yin's advice, hopefully that one won't come back to bite her in the rear. It wasn't easy for her parents to keep her mind focused, and even now she still can lose her attention span to the occasional shiny.

Issy is very friendly and outgoing, always ready with a wave and a hi for whoever she meets - whether it be on the streets of Paragon or the streets of Hero Heights. A stranger is simply a friend she hasn't met yet, or a criminal she hasn't knocked out yet. As long as the other person doesn't come at her with fists, guns, or magic fireballs drawn, she's quick to trust. This admittedly might not be the best course for an aspiring hero, but Issy has a hard time seeing the bad side of anyone who hasn't given her open reason to. She's here to set a good example for fellow heroes and police officers, and she's never going to do that if she gives in to brooding and sulking like, say, Manticore. The poor guy, but at some point you have to get up and get back in motion again!

Which leads to what might be Issy's actual superpower: Unlimited moxie. She fears nothing. She's not afraid to try. Knock her down, and she'll just get back up again every time. Nobody, not supervillains or anxious superiors are going to keep her down. Nothing yet has been proven to break her spirit, and perhaps nothing ever could. She has the 'inner will' that Marcus Cole claimed without the trappings of silly mythical wells. Or super strength or invincibility, but that's why she has her riot shield. 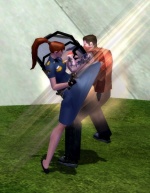 Issy took a host of martial arts classes growing up, her highest dan coming from the school of Jeet Kune Do. 'Use whatever is useful' or otherwise known as 'that funky Bruce Lee stuff'. Her whole body is a weapon with perhaps the most important being her head. She knows where the weak points are and how to exploit them. Her favorite move is the flying uppercut, complete with the occasional shout of 'SHORYUKEN' to honor all those fighting games she grew up on. She's a serious fighter, to be certain, but what's the fun in that if she can't have fun with it? Of course, none of that kung-fu stuff will stop a bullet, and that's where her trusty riot shield comes in. It wasn't completely bulletproof to begin with, but thanks to Wentworth's and the university invention program she was able to improve it enough to make it pretty much impervious to anything. Now she can hide behind it one moment, come flying out with a roundhouse kick to the skull the next, and most of the time come away unscathed.

Her powers aren't all fists and fury, either. She carries a standard issue patrol belt, and has stuffed it full of various odds and ends to help out in various odd and end scenarios: A baton, various grenades, a medikit, a recovery serum, pretty much anything she could grab from Wentworth's. Through her journey to becoming a full hero, she's also stumbled into incarnating herself as well. Its not something she's really dwelled much on, other than finding herself with neat powers to take on the even bigger threats from Praetoria and Dark Astoria.

- Isabella grew up with a different nickname, one she lost immediately after reading her first novel about sparkly vampires. Her current nickname of 'Issy' came from her new friend, Alex.

- If you value your life, or at the least your lower torso, never ever mention the sparkly vampires.

- On an OOC note, Isabella was inspired by [Natsumi Tsujimoto], John McClane, and a couple old OCs of mine from other RPs.

Music To Punch Things By