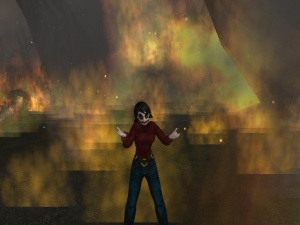 The Time Before Insanity

- This toon is HEAVILY inspired by Jeff the Killer (Warning, the links above are links to the three of the Jeff the Killer creepypasta stories (There were four) read aloud, if you do not like gorey or disturbing things. Don't follow these links)

- The chief mental disorders Gabe suffers from are Pyromania, Schizophrenia, and Psychopathy.