"You must learn, Shifu, to put aside your precious illusion of control."
- Master Oogway, Kung Fu Panda

Probability has been written about so many times. In some series, there are characters who exist strung between extremes of good luck and bad - your classic harem anime protaganist, for example, will often somehowh have five gorgeous women wanting to jump his bones despite him having the day-to-day commendable traits one accords to a lobster. Black Cat and Longshot in comics, and a fair few other characters already on this wiki deal with the idea of good luck as a heroic enabler. What has me curious is the idea of the eternal narrative's bitch. Someone who exists to suffer for the story, an antagonist with a short-sighted view who was able to shut out the net negative effect all his short, sharp enjoyments were having on his life, because he had to.

Rough Hex is a mentally damaged man. At his worst, when engaged, masked, and chained, he charges through friend and foe alike and regards most people as objects, things to interact with and exploit. Even when restrained from this self-destructive spiral, he's still a rough, hedonistic thug, brutalising his way through social situations rather than get creative. Analysis indicates that this is connected to the odd twisting effect he has on probability.

Simply, Rough Hex is a thug who lacks any sense of control over his own life, leading to dangerous and unpredictable behaviour. Lost and untethered, he ricochets from social encounter to social encounter, interacting with people in as simple a manner as he can. When in a situation where he cannot fight or fuck his way out of a problem, he finds a way to ignore the problem.

The only real saving grace in this perspective is that Rough Hex never gives the impression to others that he is bothered by the things he cannot control. Perhaps due to the wildness of his lifestyle and the unpredictability of his existence, Rough Hex is very flexible when presented with new circumstances, and very willing to adapt to changes in his life or lifestyle. 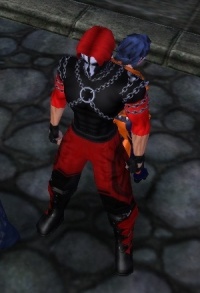 About the only person in the world Rough Hex had any positive interaction with was his sister, Heather. He speaks of her and her association with him, noting she tends to buy the groceries, handle the money, coordinate transport and all the little, niggling things that he doesn't like doing that are nonetheless tedious.

The problem is, barring for some odd ghosting on security footage, nobody has ever seen Heather. His residences always have a second bed, which is never used, he routinely sets two places, but eats for two, and is always the person responsible for this work that he says he assigns Heather to do. There's no physical evidence that Heather exists at all, but Rough Hex acts as if she is present in his day-to-day life. Some paperwork has surfaced that bears the signature 'Heather', but that is bloodstained and harried - blood tests indicate that it's Hex's blood, too.

Some imagery has surfaced from those few Fortunatas able to glean real information about Rough Hex. They bring to light images of a young woman with blue hair and quite possibly, horns, who taps the same source of magic that he does. Effectively using her brother as a power source, this young woman has - or had? - the potential to rival Ghost Widow herself for power and Mako for predatory destructiveness. The problem is, outside of these visions and Hex's own mind, the girl doesn't seem to exist.

One has to be careful, however, how intensely a man like Rough Hex can believe in things. Some Fortunata have hypothesised that his luck-influencing abilities make it difficult for Hex to be successfully scried upon, or for him to interface properly with existing methods of time travel. In that regard, he would be constantly collapsing potential universes, making one world that is rather than the thousands that are. 'Heather' could be an echo from one of these worlds, a potential sister that simply never existed in this world, and whose world was unmade by Hex. 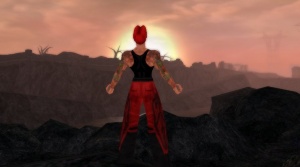 Howl
Hex is a dark star of magical confluence. Normally a leyline focuses itself on a place, and things form at that location as a result. Cairns and crossroads, for example, are common markers of leylines. Somewhere in his upbringing, Hex became the tangled focus of two different leylines - one carrying a necrotic line of a graveyard of graveyards, the other touching the sun as it rose every morning, a perfect line of fire and life. These powers blur together, exposing and controlling his spirit, meaning he simultaneously tastes death and life with every breath. An unending cycle of creation and destruction, Rough Hex finds his powers a neverending flow of give and take, leaving foes scorched with the heat of the sun or chilled beyond the grave.

Or so he understands things.

Spoiler warning: Details about a player-created storyline, or information currently unrevealed about a character, follow.
What Hex doesn't know is that his dragging of the leylines is due to their previous connection to him. He is Gyges, the seaborn Hecatoncheires. A recreated Abomination, he has lain unconscious underneath America for some time now, woken some years ago by initial researchers disturbing the Leviathan that forms Sharkhead Isle. The great sea creature speaks of the time he had dominion and friendship with Poseidon, and his overwhelming sexuality is a byproduct of ancient dealings with Aphrodite. This ancient history is also why he has such an animosity with day time; he brokered a deal with his brothers for the Crown of Acrocorinth with Helios, the god of the sun. That deal continues to this day, but the sun no longer is Helios' to control. This leaves the aspect of Rough Hex that is Gyges confused and annoyed, as if seeing the Sun as an old lover who now dances with someone new.
Spoilers end here.

Rough Hex experiences a constant swing between short-term satisfaction and long-term frustration. The most notable impact of this is his living quarters. In the six months he has lived in the Etoile, Rough Hex has moved house no less than fourteen times. He has been evicted four times, his property has been declared unlivable seven times, and three times the property has been destroyed by acts of god. In each inspection, however, the inspector has noted - when pressed by Fortunata probing - to have spent much of the inspection having casual sex with Rough Hex, even if they hadn't met before. This applies to both male and female inspectors.

Rough Hex can't control the way good fortune falls upon him. He doesn't have to worry much about food - he can reliably go to any restaurant and something will wind up meaning he gets his meal for free, he barely has to pay rent given his transience and he doesn't often have to pay for any serious upgrades to anything in his life. He's never been sick, as far as he can remember, and while sometimes he'll buy trinkets or steal statuettes or the like because Heather wanted them, he'll just as much ignore or forget them within a few days' time.

This is good, because the long-term impact of his probability warping is negative. He has a demonstrably negative affect on property values and has been seen to be an unwitting instigator of problematic disciplinary issues inside Arachnos. Initial attempts to assassinate him led to a fortunata going mad. At this point, Rough Hex is regarded as persona non grata to the Project Destiny stable, but is still seen as a very valuable tool for Arachnos' purpose. All four factions of Arachnos are interested in recruiting him to someone else's division, intent on watching him lend strength in the short term, and damage in the long term.

About the only thing that seems untouched by this probability effect is the Rikti - perhaps due to their extradimensional or extramagical nature, Hex and the Rikti get to interact on an entirely level playing field.

I made Rough Hex[2] one afternoon while trying to find something to do with a friend. Hex on Wheels and Rough Hex were the result, a fun little project to play whenever we're both around, both online, and both available. Mysteriously, we've both been having fun playing them, which is a shame - it interrupts the valuable schedule of drama and bullshit that normality provides.
- Rough Hex, original opening to this page[3]

Originally, Rough Hex was a very simple, self-contained character. He didn't have to appeal to anyone or have RP hooks to interact with anyone in a positive way because his RP universe was one person. That player's departure from the game - at first due to financial reasons, then compounded by social concerns - left Rough Hex orphaned. I left him alone for four months, before considering that she wasn't coming back and that things weren't going to get better if I left them alone. I had a perfectly workable, enjoyable brute that I wanted to play, so, after talking to her, and getting her permission to move on without her, I resolved to do so.

Normally, I'd have used a rename token, like the last dark melee brute I had, who I turned into another character[4]. Unfortunately, I loved the name too much, and the look - with both those two factors tied inextricably to the character, I had to keep him as him. I couldn't just have Rough Hex and assume a different personality, a different mentality, but still look the same and be named the same thing. It wouldn't be right, and I try not to do that. Instead, we have what we have here: a slightly mad character who ties into another story, and whose mental mode is much more personable than before.

Here's the short list of stutf you can use as a guiderope. The main people Hex is likely to associate with are Arachnos agents who have to keep an eye on him due to his habit of destroying property in the Etoile, people who feel they can manipulate him into doing work for them and people who would find his dangerous and fear-inducing manner exciting.