Once upon a time, at the behest of Maxwell Christopher, Bob Bobbins was dispatched to investigate a building in downtown Kings' Row that Maxwell suspected was a secret hideout of Nemesis' army. While strongly suspecting that Maxwell had it out for him, Bob infiltrated the complex in question[1] only to discover that it was not, in fact, a Nemesis stronghold. Rather, it was a secret government tentacle demon storage facility.

It's best not to think about what happened next. 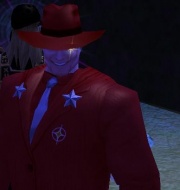 Completely trustworthy. Really.
With the acquisition of flying and glowing powers, Shank has acquired a reckless and borderline sociopathic streak, showing little concern for the well-being of anyone who can't keep up with him[2]. Part of latter could be because he knows that the average Jerk can handle themselves just fine in his wake, while the average hero would be thrown into disarray before being quickly overwhelmed. Part of the former could be because he's well nigh invincible.

After his (emasculating) encounter with a glowing space squid, Shank (nee The Taffer, nee Bob Bobbins) acquired powers eerily similar to those of Kheldians, which would be much more impressive were it not handed out to people on a daily basis. Flight, glowing shields, laser beams, et cetera et cetera...

...but his obsession with cutting is such that it affected how the powers manifested. Instead of simple glowing fists and beams, Shank fights with short blades of Kheldian energy and tosses around luminous sheets of light that simply slide through flesh and armor like butter and make a huge mess of people on carpets. 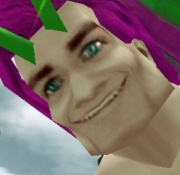 Not that any of this has changed how he fights, though: Basically he just flies into the nearest group of potentially hostile humans (or humanoids) and turns into a dervish of Kheldian energy blades and small explosions, cutting things apart, throwing people (or people analogues) around the room and generally making an enormous mess of things.

What's more amazing is that he can do this consistently and not die horribly. Although to be fair, you'd probably be thrown off your game too if you saw a man in a bright purple toga with purple and green butterfly wings flying towards you with that expression on his face.

Warning: Unauthorized editing of this wiki page may result in the savage, shiny destruction of everything you hold dear.