By all accounts, James Michaels' childhood was a relatively normal one, albeit with certain examples of what could possibly be called precociousness tinged with a blatant disregard for human life. At around six, having read that the average American suburban family had 1.5 children, he attempted to bisect his older brother with a bread knife and would've succeeded if his parents hadn't come home early. [1] When he was twelve, having read a few issues of his friend's Batman comics, he decided he wanted to grow up to be a hero. His parents were killed the next day by muggers, who when finally apprehended by police claimed they were paid off for the murders by a young boy with blonde hair.[2] Surprisingly enough, none of the staff on the police department made the obvious deduction,[3] and the young James was sent to a foster home.

Several years later, after his graduation from high school, James started to get involved with the local music scene and formed a hardcore[4] band with a couple friends, which released one album - brutally panned by critics as lacking any sort of talent or listenability whatsoever to normal people - before disbanding. These critics were all found savagely murdered and dismembered in their homes over the span of the next two weeks - all except one, the noted music journalist and superhero Christgau X, who managed to thwart and subdue James in the act and get him committed to the Zig's asylum for life. During the extended Zig breakthrough by Arachnos, James was freed and decided to pursue a career as an independent career criminal and guitarist in the Rogue Isles.

What, did I do something wrong?

Obvious enough. I mean, the guy is named Sociopath, after all. He has almost absolutely no regards for morality or basic social norms, save for the ones he selectively chooses to follow on his own whims. If anything, his basic personality could be described as a disaffected hipster who thinks that the rules never apply to him[5] - utterly self-obsessed, misanthropic and lacking any sense of judgment whatsoever. The fact that he usually gets through any inadvertently life-threatening circumstances of his own making by pure luck and judicious application of stabbing doesn't help matters, either.

Of course, this isn't to say that Socio is a totally merciless, one-dimensional individual, however. He can be exceedingly charming and effusive when he wants to, and has even on a few rare circumstances shown sympathy for others, but as with most sociopathic people, this is usually dismissed as being purely superficial and for ulterior motives. Some psychologists and psychiatrists who have examined his life and career in-depth[6] have theorized that he actually has a compassionate split personality buried under his normal violent and egomaniacal facade - those same people have also disappeared or been involved in suspicious accidents shortly after the publication of their works. It might just be uncanny coincidence, but this has dissuaded most other researchers in the field from similar psychoanalysis.

A typical training session under Shank (Lesson 87: Hobo Combat/Dynamite Dodging).
Since young, Socio has possessed a fascination with blades and other sharp instruments that make other people's blood spatter in interesting patterns. It's therefore not surprising that shortly after his prison break and relocation to the Rogue Isles, he sought out the noted swordsman and sharp things enthusiast, Shank Taffer, on one of his self-imposed 'business trips', and apprenticed himself to him for several months, mastering the arts of cutting and stabbing in record time. Impressed with his new protege, Shank taught him an additional few ninja tricks appropriated and heavily modified for personal use[7], such as throwing sharp objects on the floor to impede attackers, throwing clouds of fine sharpened[8] sand particles to blind and disorient assailants, and healing wounds through pure force of will by concentrating on the essence of sharpness itself.[9] 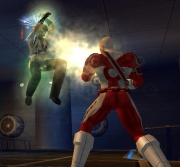 Yes, he did dodge that. You don't want to know how.
Socio possesses a mutant gene that occurs rarely in metahumans, one notable case being the French gendarmerie-affiliated hero Estoc. This gene, colloquially known in research fields as 'Accelerant Retardation', manifests around the teenage years and gives individuals increased sensory perception and full control over every joint and muscle in their body, allowing them to move, attack, and unconsciously react to and dodge attacks at lightning speeds. The effect is similar to overclocking a PC at about twenty times its rated speed, however, and most mutants affected with the gene usually die from the g-forces resulting from several parts of their body moving at Mach I in different directions during combat situations without exhaustive mental training and a full body inertia harness. The gene is present in lower concentrations and in a slightly altered genotype in Socio's bloodstream, however; therefore, he moves at high speeds, but not enough to cause long-term physical trauma, and can evade attacks to a reasonable degree with enough mental focus. He also doesn't need to wear any special protective gear, as well. 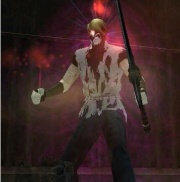 Cut. Stab. Rularuu.
Socio usually uses a form of long, two-handed blade in combat. Right now, his current favored weapon is a Talsorian katana he bought off Vanguard by bartering in pieces of dead Rikti to their bio-research teams. Before that, he first used a sharpened rusty fan blade which he acquired during the Zig breakout, and following that a very nice Impervium sword that formerly belonged to another Stalker he waylaid and horribly murdered with the fan blade. He's resourceful.

He also owns a few other swords, the other most notable one being a gigantic Rularuu zweihander obtained through unknown means, and of which the wielding of causes bloodlust and homicidal mania akin to possession by an otherworldly entity. Of course, since he's already pretty damned violent on his own, most people don't really notice.

Socio's dress sense is vaguely hipster-ish with an evil bent.[10] He owns about twenty of the same pre-washed, ripped white t-shirts, and about the same number of pre-faded jeans - only in his case, unlike most other hipsters, he actually goes out and gets them torn up and dirty. But not covered in blood, because he's good enough at what he does to not get any of it over him.

He usually keeps his mask on, mainly due to him thinking it's awesomely cool[11] - as a result, most people never see his real face, leading to rumors that he's actually horribly deformed underneath. Such rumors never last that long, nor do their originators, for that matter. 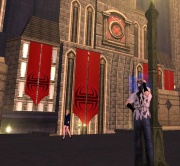 Frivolous editing of this wiki page might result in sharp-objects-related injuries.