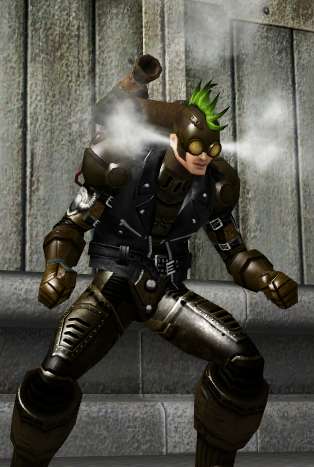 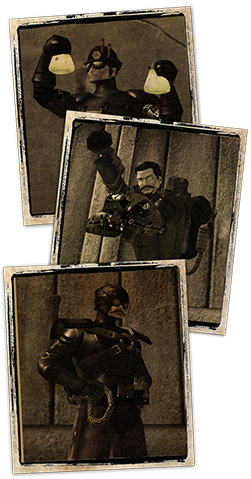 Born on a snowy October morning in London, England in 1850, Arthur Quinn was not destined for greatness by any means. Orphaned as a child when his parents were gunned down and robbed, Arthur was left to fend for himself on the streets, resorting to thievery to survive. Embittered by the poverty and the growing crime rate he saw around him, Arthur took matters into his own hands and became a Robin Hood-like vigilante, stealing from the wealthy and giving back to the destitute. Dubbed the Gaslight Guardian for protecting innocents from muggers in the dead of night, Arthur put his natural intelligence to use, crafting an array of devices such as bulletproof armor and gas grenades to use in his war on crime.

But eventually, after meeting the love of his life, Arthur chose to retire. His son Aleister was born soon after. After discovering his father's exploits as a costumed adventurer, Arthur reluctantly allowed Aleister to assume his identity and become the next Gaslight Guardian.

After being drafted in WWII, Jamison met and befriended Samuel J. Covington, a wealthy American socialite whose life he saved during the London Blitz. Unmarried and with no family to mourn him, Samuel left his entire fortune to Jamison when he died at the tail end of the war. Now a multi-millionaire, Jamison used his newfound capital to support his crime-fighting.

When his son Garrett was born, Jamison knew things had changed forever. With a taste for the finer things in life, Garrett held no interest in the heroic endeavors of his forefathers. He spent his free time jet-setting around the world and purchasing things that shouldn't be purchasable. Jamison was afraid the real family business had ended with his son.

Fortunately, he was wrong.

As soon as he was old enough, Jack Quinn took the silver spoon in his mouth he was born with and stomped it to pieces. As a kid, he became closer to his grandfather than his father, as he'd often tell him stories of his youth and the adventures he'd been on. Just like his great-great-great grandfather before him, Jack witnessed a series of tragedies as a young man that would lead him to sympathizing with the impoverished and underprivileged. He became an impassioned anarchist with a healthy distaste for the elite society he'd been born into. Shirking the responsibilities his father burdened him with, Jack left home as soon as he was able.

Two years later he was notified his grandfather had been killed in a break-in. Devastated, Jack returned home. As he spent time in his grandfather's secret lair, realized the home invasion had been staged to mask the real crime. He noticed one of his grandfather's prized possessions had been stolen - The famed Ruby of Kukundu. Unbeknownst to most however, the ruby isn't actually a ruby at all, but a focusing crystal for a devastatingly dangerous weapon of mass destruction Jamison had recovered from the Nazis during WWII.

Following clues in the media cross-referenced with notes from his grandfather's journal, Jack absconded with an arsenal of his forefathers' gadgets & devices and traveled to America to track down the murdering thief who'd taken his grandfather from him.

Steampunk possesses no superhuman abilities, but often utilizes cunning, improvisation, and intelligence as tools for victory. He relies on the vast array of equipment he has either developed or inherited. But never read a book by its cover. While his forefathers were slaves to the mechanical and steam-powered technology of their times, Jack's weapons and armor are actually crafted from modern technology and only masked by a Steampunk aesthetic. This often leads to his enemies underestimating his capabilities. Among these gadgets are:

Firearm, his main weapon. An exaggeratedly large blunderbuss that projects a concentrated stream of fire at his enemies.

An insulated, fireproof battle suit that affords him protection against the fire and heat his weapons generate.

A high tech backback that boosts the power of his flamethrower. It also puffs steam.

Brash. Impulsive. Rebellious. Aggressive. All words others have used to describe Jack at one point or another. But what others perceive as recklessness, Jack views as passion.

Anti-capitalist. Anti-government. Basically anti-any-type-of-authority. Jack loathes the greedy and corrupt and any system that allows them to stay in power. He considers himself the voice of the voiceless, defender of the underprivileged and regularly takes on corrupt politicians and businessmen, declaring war on those who misuse their power at the expense of those without any.

Though he lacks the technical brilliance and experience of his predecessors, he makes up for it in street smarts, ingenuity, and determination.

"My Own Worst Enemy" by Lit
"Walk Idiot Walk" by The Hives
"Rise Above" by Black Flag
"Hate Everyone" by Say Anything
"Institutionalized" by Suicidal Tendencies
"Damnit, I Changed Again" by The Offspring
"Number Five With A Bullet" by Taking Back Sunday
"Pain" by Jimmy Eat World
"Dismantle Me" by The Distillers