Viktor Keravnos is a 36-year old man who currently resides in Cap au Diable. Before he landed there, he lived in what was once called the White Plains before greatly suffering from the aftermath of the Rikti Invasion in the past. What looks to be a brash, seemingly arrogant, and condescending individual is actually a well-spoken and well-educated individual.

Born and growing up in St. Paul, Viktor was a very happy kid. He had a lot of friends, he was very social, and his parents loved him very much. One could say that he was one of the happiest kids on earth. Again, he was a happy kid with a very level-headed disposition.

At the age of 13, his parents got a job transfer in Nantucket, Massachusetts and they needed to move away from St. Paul. From this day forth, Viktor found it difficult to make friends. In school, he would constantly get into fights with the other kids. Get sent home, even suspended from school. He became an angry and troubled teenager. They then moved to the neighboring state of Rhode Island to get another fresh start.

At 17, he found stability in a close friend. They shared the same interests, their personalities blended well with each other, they basically spent a lot of time together, and did things together. They graduated high school at the same time, and both went to University of Rhode Island. One could even say that if you saw one of them, you'd see the other.

Upon graduating college, they both settled on living in a place called the White Plains in Rhode Island to be close to Viktor's parents. In 2002, an event took place that would change his life forever. The Rikti crashed and invaded. Viktor lost everything important to him. His parents, and his best friend. He once returned to his angry and troubled state. He felt alone once again.

After receiving his powers, Viktor found it easier to cope with. Though because of what has happened in his life, he has become very jaded. He has become some sort of a player, and he's become brash, somewhat arrogant, and condescending. He is not afraid to tell you if there is something wrong with you, and will not hesitate to try and put you in your place with words.

The what's and why's

Viktor Keravnos was born to a couple (who immigrated from Greece in the mid-60s) on March 25, 1975 in St. Paul, Minnesota. Growing up, he had a sort of charisma in him that granted him a lot of friends. Basically, everyone in the neighborhood liked him. The kids liked playing with him, the bullies didn't dare touch him. He was a happy kid, and there were very rare occasions where he'd get angry, mad, or unhappy.

When Viktor was 13, his parents received some sort of job promotion that required them to transfer. Of course, this meant that they had to move. Viktor was very unhappy with that idea. He did not want to leave any of his friends behind. Ultimately, he had no choice. They moved to Nantucket, Massachusetts and this is where trouble began for Viktor. He felt completely alone, and felt like no one could fix it. He got into many fist fights, physical fights, and even sent two kids to the hospital. It got so bad that they were forced to move out of the neighborhood.

They moved to Newport, Rhode Island in hopes that Viktor would calm down a bit more but for the most part, he kept to himself. He was smart enough not to bother anyone like they did back in Nantucket because he knew that he'd probably end up in some mental institution if this kept up. About three years later and in his last year of high school, he met and befriended a boy his age named Charlie. In Charlie, Viktor found solace and stability. Their personalities blended well, they both listened to the same type of music, they were interested in the same sorts of things. It became a common sighting that if you saw Charlie, Viktor was with him or was nearby. In essence, these two became inseparable.

They both graduated high school with honors and got in the same university, University of Rhode Island. Viktor studied mechanical engineering while Charlie did his general ed and eventually got into their medical program. They were, of course, roommates all 4 years in college and they received their bachelors with high honors. They settled on living in White Plains area of Paragon City, Rhode Island in order to be close to each other and to Viktor's parents. While Charlie lived nearby to Viktor, Charlie was still finishing med school.

Little did Viktor know, his life would change forever. On May 23, 2002, a Rikti Invasion took place. Rikti ships crashed in this area of the city and with it, many lives have been lost. This included Viktor's mother, Viktor's father, and his best friend Charlie. Or so it seemed like. Feeling an incredible rush of frustration, anger, loneliness, and despair, Viktor lashed out and defeated quite a number of Rikti monkeys with his own fists. Soon, however, he was met by two mysterious Rikti Magi. They claimed they were the oracles within the Rikti force, but it wasn't like Viktor understood what they were talking about. Without giving a second for Viktor to react, the Rikti Magi seized his movements and they took him inside the ship via teleportation. It looked like they had suspended him on a wall. It seemed like they were asking him something and of course Viktor didn't understand. Every time he didn't speak, he was zapped. Every time he yelled out loud, he'd feel a burning sensation throughout his body. Either way, it was absolute hell.

The torture was eventually interrupted by a hero who crashed into the ship. It caught the two Rikti Magi off-guard and they left to see what was going on. Little did they know, Viktor was still physically coherent. By sheer will, he forced himself in whatever force field he was in let himself go. Almost immediately, the two Magi went back to see what the hell had happened and discovered that Viktor had escaped their force field. However, they underestimated Viktor's physical strength and the two Magus were defeated. Viktor panicked and wanted the hell out of there. He looked at a window with a view to the outside and he suddenly found himself out of that ship. Well shit, it was that easy to get out of there?

Getting in and out of the Zig

Having nothing and no one left, Viktor was forced to fend on his own. Unfortunately, this included stealing. A lot of stealing. He capitalized on the current war going on to be successful at many of these robberies. Fairly lame crime to commit to get into the Zig if you ask me. But sadly, he did get caught. He was sentenced to 15 years in the Zig with no chance for parole.

Being an inmate, he wasted no time telling the other inmates who was boss. If anyone even tried to bully him, they were met with a lightning bolt to their face. Because of the nature of his powers, he earned the name The Subconductor. He didn't like the name much but figured that if he was going to be called something, it would have to be something people can remember him by.

As soon as Arachnos raided the Zig, you better believe that Viktor capitalized on that event as well to try and get away. And you'd better believe that he used Arachnos to get the hell on out of there. He arrived in Mercy Island and decided that he was going to live his life the way he wants to. He no longer felt like he was bound by any law but his own.

Solitary in the Isles

Viktor figured that everything would be easier if he had no one close to him, and he works best when he works alone. He now lives on his own in Cap au Diable and constantly is given jobs. He once relunctantly accepted a bank robbery job with a team, knowing full well that he will not assist the others in escaping should the law corner them. And he went by his word. The robbery was a failure, and the only one who escaped the robbery was Viktor because of his ability to teleport.

Right now, he is more or less a mercenary. He will do work for you if you can pay his price. Viktor has a knack for finding traps, however. So if you're trying to set him up, be prepared for payback. After all, payback's a bitch, ain't it?

Ever since he began his so-called career as a villain, he also began earning a reputation for being a player. Not only that, he had become known to be a player towards both women and men, insinuating that he is, in fact, bisexual. (Perhaps his former best friend Charlie had brought this out of him. After all, the ancient Greek's freely expressed their sexuality towards everyone they cared about.) It is not that he has commitment issues. The way his past has shaped him has put up many emotional defense mechanisms for anyone who dares become closer to him in a mental and spiritual sense. As soon as Viktor feels any emotional attachment to anyone, he never wants to see them again.

Ever since he began work and being paid by The Vanguard in what is now known as the Rikti War Zone, it had given Viktor more motivation to return to Paragon City. He has since questioned his resolve about the past and has since thought about what has really happened to Charlie. He has been finding small newspaper articles regarding a Dr. Schwarz who helped 100 heroes recover in a matter of days from serious injuries. A part of him had been wanting to explore this possibility. Another part of him had been telling him to stay away from this. A bigger part of him wanted to return to Paragon City. There were times where he was uncertain and it had been something that he couldn't stop thinking about. Currently, he is hiding out in Founders' Falls and is renting a one-bedroom apartment under the name "Bruce Vernon." 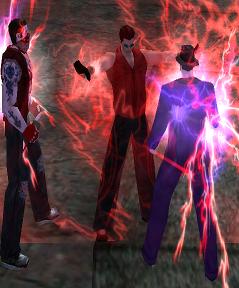 The two Rikti Magi that tortured him (and that he ultimately defeated) zapped him with lightning and fire powers of obvious magical origin. It is unclear whether the magi were aware of it but it would seem like Viktor actually absorbed their powers. Fending for himself and keeping himself alive, these powers would later grow and manifest into how he uses his powers today.

But of course, he is still human. As such, he can still get cut, bruised, get a concussion, etc.

The ones he knows

Things to be considered

If you want to get a hold of me, the link up above that's below the picture inside the info box will provide you of a few ways to contact me. Don't be shy, I don't bite. Viktor does, but his player doesn't. :P