The Emerald Core was born on April 21, 1982. His real name is Brian Michael Winters. Brian was born with blonde hair, brown eyes and a quiet demeanor. He lived most of his life in Kansas City, Missouri. Growing up, Brian had many friends and was a good kid. He rarely stepped out of line and broke the rules, causing some of his peers to treat him badly. They called him "Teacher's Pet" and "Goody two-shoes", as well as other not-so-respectful names - usually including vulgarities. Despite those obstacles, Brian lived happily with his family and friends. However, it wasn't long until he started noticing changes about himself...and not the normal kinds of changes young children get. Bigger changes. 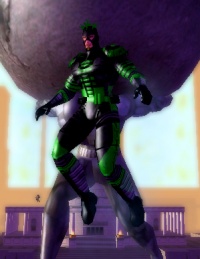 Floating in Atlas Park (as usual).

Brian Winters has a Mother & Father (Susan & Charles), a little Sister (Melissa) and an older Brother (Dean). Dean didn't approve of Brian's newly found path as a superhero/crime fighter. He believes all Heroes with powers exhibit traits of self-indulgence as well as as unchecked aggression.

As Brian grew up, his powers became stronger and more pronounced, while his relationship with his brother all but vanished. They still see each other from time to time...family get-togethers, Christmas, 4th of July...but their feelings for each other have never been the same. Brian feels betrayed by his brother, believing that if his brother was in his situation, he would help out in anyway possible.

Luckily though, he still has support from his other kin. At first, Susan and Charles were worried. They thought it was an accident - a deformity within his genes. For awhile they didn't know what to do with him. But one day, the family dog ran out in the street in front of an on-coming Truck. As the family looked upon in horror, unable to do anything, Brian used his powers to lift the truck over the dog and drop it heavily into the ground. Suprisingly, Brian's Parents & Sis were greatful for his deed and embraced his new powers.

Brian, unknown to him at the time, wasn't your average kid. He had a special side of him that know one knew about. The first sign of his powers was in Junior High School in 7th grade. A Bully by the name of Roy started picking on Brian and his friends. He would torment them endlessly, humiliating them on a regular basis. On an overcast day, Brian was hanging out with Kelly, a girl whom he had a crush on. Roy got wind of this and ambushed their meeting after school. Brian finally had enough and swung at Roy, causing him to fall back...after flying 20 feet across the park. Luckily, no one was around to see this altercation, except for Roy and Kelly. Both never spoke of it, as they were left completely speechless from this incident. Roy stopped picking on Brian and his friends and Kelly stopped talking to Brian. He was devistated.

There was of course the incident with the family dog, causing more questions to be asked. Brian found himself able to move large objects, giving him superior strength but only for a seconds at a time. He could move energy from his hands and cause damage to things and people, but only minor damage - he was still young. By College he finally got a grip on his powers and would regularly utilize them for minor events.

A Hero is born 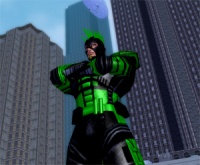 Watching over the innocent.

His first taste of heroic action was during Homecoming night. While out with his friends downtown, he witnessed an altercation between a football player named Tom and a 19 girl named Chelsea. Brian watched as Tom grabbed Chelsea and forced her down a dark alley. Feeling upset and steadfast, Brian walked down the alleyway to find Tom trying to rip off Chelsea's clothes. As she screamed for him to stop, Tom caught a glimpse of Brian and told him to leave. Brian walked right up to him and told him he should leave her alone or else. Tom struck Brian to the ground, vowing to prevent him from getting in his way, but Brian was able to stand right up. He blasted Tom in the chest with an almost blinding flash of light, knocking Tom 50 feet back and slamming into a pile of garbage. He got up and saw Brian's hands glowing in the dark. Brian told him if he told anyone about this, he would make Tom's attempt at Rape known to the College. He fled the scene before he could ask anymore questions.

Brian saw Chelsea cowering in the corner with tears down her face. He knelt down to take her hand so he could help her up, but she only cowered further. Brian felt that no matter what he could do, right or wrong, he would always be feared. Brian looked her in the eyes and said he was sorry for scaring her, but he just couldn't bare to let that happen to her. He started to get up, but Chelsea grabbed his hand. She pulled him to her, wrapped her arms around him and held him tightly. She sobbed in his arms, only saying two words over and over again: "thank you. thank you." Brian secretly smiled to himself, feeling like he had done his family proud.

...he and Chelsea have remained friends to this day.

Brian's powers are all energy-based. He has melee and ranged capabilities to battle his foes. Even though he's not the strongest person in the world, Brian works out regularly and always keeps his powers in check. As of now, he can only hover, but he's working on the ability to fly and in a few months hopes to achieve this. Brian's become very adapt at the range, including medium blast, sniping blast, and power blast. He's a powerhouse to be reckoned with, but is still vulnerable to pain and other human characteristics.

File:Ecparty.jpg
Emerald Core partying it up.

At 23, Brian moved to Paragon City in hopes to make a difference there. He had heard about the trials the city was facing and felt it was his duty as a person with super powers to help out. At times he feels weird being a superhero but has since embraced it. Brian understands the need for heroes today and has no qualms in helping out those in need. Today he works as a freelance media artist whose made enough money throughout his life to live comfortably. Sure it's only a 1-bedroom apartment, but to him, it's home. He has a group of friends that he hangs out with, but with crime fighting, friendships and relationships ultimately suffer. Brian is currently single and is fine with that: love will come when it's ready.

Brian created a costume after his two favorite colors: Black and Green. Even though his costume isn't bulky, it still has functional use for fighting crime. Shock-absorbing boots for rough landings after hovering (or being knocked 100 feet back by a villain) and special gloves to harness his energy power...he went through 16 pairs of gloves before finding the right polymer to control his actions...he also went through 16 contracting bills to pay for the holes in his walls as well.

To keep his identity secret, he wears a black mask complete with 3 saw blades on the top. The reason for this is still unknown, but most people speculate it's because it "looks really cool". The Tactical belt has communications installed so he can listen to police scanners in helping out Paragon City. He regularly helps out the Police Department, especially when it comes to missing people. Knowing that Chelsea from College could've suffered the same fate, he feels a strong desire to prevent anyone from losing a family member.

...the name? His favorite color is Green (Emerald being a better name) and as for 'Core', in college, Brian's longtime friend Dave - who knew about his powers all along - told him he was "Compassionate to the Core". Thus, The Emerald Core was born. 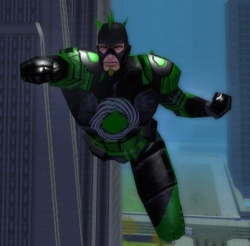 Rush to fight off evil!

Emerald Core was apart of The Fronline for a few months, helping out any way that he could. He was approached by a woman named Utsu Koto Taka, or Rei (as she's known to her friends). He met up with Blue-Havok and eventually added to the Roster. Em was very excited to be apart of his very first "Supergroup".

He made a lot of friends, as well as enemies. Even though his tenure lasted only months, Em delt with his share of battles. Rei was inevitably jailed for a law-breaking reconnaissance mission with the Council. A friend by the name of Johnny Turbo turned to evil after feeling responsible for Rei's punishment and weeks of heavy drinking. This lead to his shocking death.

With members of The Frontline slowly disappearing, something had to be down. Thus, Emerald Core left The Frontline (on good terms) to join with Freedom Force.

Freedom Force is a new Supergroup created by longtime Frontline members Liquidus, Kara Nova, and Timekick. Other members in Em's circle of friends are Johnny Turbo and Graphite, to name a few. A new member by the name of Techno Raven has also joined the Force to round out the group.

Liquidus was able to plant a surprise for the members of the group; Johnny was alive and well! Em was so estatic he forgot about the pain he had felt losing him. All is not perfect though, as Emerald Core is still a little untrustworthy towards Liquidus. During an altercation with Liquid and Johnny, Liquid prevented Johnny from killing Em by joining his side...unfortunately Em paid the price. Liquidus shot Em in the shoulder and nearly left him for dead. Em was patched up though by Liquidus before he left, but Em is still a little standoff-ish.

Regardless of the situation at hand, Emerald Core is a Defender for the Civilian population. He may not be 100% on board for the new group, but he's slowly opening up to them. Eventually, he will learn to trust his new colleagues and help The Freedom Force fight the faces of evil and oppression!