The Steadfast Soldier Initiative is a fictional super-soldier program for several characters for the MMORPG City Of Heroes. Inspirations for it include the "Les Enfants Terribles" project from MGS, The "Ultimate Origins" from Marvel, Captain Atom's origin and The Weapons Plus Project from Marvel.

In 1943 during the peak of the second world war, Nazi super-soldiers StormKorps terrorized the British Isles while the Japanese Empire's Imperial Wind tried to seize control of the Pacific. Fearing the worst, the "Big Three" of the allied militaries proposed a joint super-soldier project in case they became tactically crippled in those key areas. The project was titled "The Steadfast Soldier Initiative" and from it stemmed many super-soldier projects. The key reason for its implementation is that the "Big Three" military powers (the USA, USSR and British Empire) felt that standard 'supers' with military training was not enough to sustain an advantage. They were unorganised, and sometimes very emotional. The Steadfast Soldier Initiative would provide the allied forces with the soldiers they needed; Powerful, precise, fearless and amendable.

After the war was over, the initiative was shut down by the commander-in-chiefs of the big three nations. The reason for the initiative being shut down was due to the rising tensions between the Soviet Union and the United States governments during the time of the Cold War. Several years went by as the Initiative stood in hiatus. The 2002 Rikti Invasion saw the rejuvination of the Steadfast Soldier Initiative. With the loss of many superpowered agents, a proposal was made to reinstate the Initiative. In 2004 the Steadfast Soldier Initiative was once again active with a secret council called "The Three Kings" overseeing the operation. The Three Kings organisation are comprised of several high ranking officials from the militaries of various countries including (but not limited to) the United States, Russia, Great Britain, Japan, Canada and China.

Steadfast Soldier ZERO, nicknamed "Project Goose Egg" was created in 1943, a month after the SSI was founded. American geneticist Dr. Arthur Frank and Soviet Union cyberneticist Dr. Yuri Kirilenko worked together to come up with a process called "Gen-Tap" or "Genetic Tapestry". The "Gen-Tap" method was the transfering of desirable traits from deceased heroes into a cybernetic/synthetic host body. In theory, the project would create the perfect body with the perfect abilities. Unfortunately, synchronising genetics with cybernetics was too difficult a task, and the project failed again and again. Frustrated with his American colleague, Dr. Kirilenko decided to scrap the project and develop his own Super-Soldier for the Soviet Government. Project Goose Egg was discontinued... Or so it was thought. 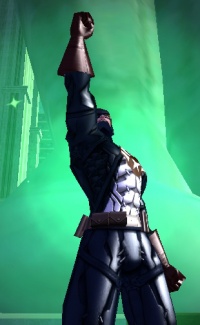 Colonel Hero was the product of "Project Lazarus". Project Lazarus was headed up by Dr. Arthur Frank. The "Lazarus" method was very similar to "Gen-Tap", however, the cells would be implemented into a pre-grown human featus instead of a cybernetic one. After months of trial and error, Dr. Frank discovered that the featuses would not adapt the genetic cells being implemented into them. According to his research, MetaHuman genes cannot be directly copied or cloned, so a method was developed to directly transfer the genes into the pre-grown featus. This also proved to be a failure due to featuses not being able to handle MetaHuman powers (the powers manifest too quickly, thus destroying the featus). However, towards the end of 1943 (date is unspecified), Wormwood Special Forces Captain Samuel "Master" McKenzie was fatally wounded in battle, and US Military officials demanded that he be saved by any means necessary, as he was a cruicial component to the Allied army. At 0300 hours that day, Master McKenzie passed away. Not wanting to lose one of thier best men, the higher ups had his corpse sent to Dr. Frank's lab where they were told to use his experimental method of "gene transferring" on the desceased war hero. Although Dr. Frank knew that the method was not perfected, he proceeded to do so anyway. Samuel "Master" McKenzie's genes were transferred over to a pre-grown featus, and to thier surprise, the featus seemed to be accepting and making the genes its own. The result of the experiment was a sucess, and it gave birth to Andrew McKenzie, the future Colonel Hero.

Convinced that the experiment was not a fluke, Dr. Frank did a through examination of Master McKenzie's genetic makeup, hoping to find out what made his genes different from other Metas. It turns out that Master McKenzie was one of the rarest types of humans on earth, "Excel-Humans". They weren't quite MetaHumans or Mutants, but they performed to the peak of thier conditions and abilities. McKenzie posessed an extremely rare gene called "The Mars Gene", and to top it off, he was classified as an "A-Type" Excel-Human. It is for this reason that none of the other experiments worked out.

Discovered in the Early-1900s by Dr. Ernest Azarcon, the mars gene is said to only be present in 1 in 60,000,000 people in the world. Of those individuals, only 10% are categorized as A-Type Excel-Humans. Throughout the history of the world, great warriors and conquerors have been known to have the characteristics of A-Types. The known A-types of the past include: Achillies, King Leonidas of Sparta, Geronimo, and Hattori Hanzo. The gene was nicknamed "Mars" after the roman god of war for its ability to produce natural warriors, as well as being dominant in Males.

After the Rikti War of 2002, a small group of Initiative scientists tried to utilize Rikti technology in hopes of perfecting the original "Gen-Tap" procedure. Using mental barriers and psycho-kinetic fields, the process was brought to fruition in ways beyond their expectations. This experiment was dubbed "Project Echo", as it was in direct response to the abandoned "Project Goose Egg". The cybernetic synthetic host body of "Echo" was built with full working knowledge of Rikti DNA. The advanced genetic structure of the Rikti allowed for the flaws in the original program to be of no consequence. As intended back in 1943, the fusion of a genetic and cybernetic body was now a realized dream.

In early 2004, "Project Echo" was put into full development. "Echo's" body was grown and flooded with information. After three months, "Echo" was the equivalent of a five-year-old male human child. It was decided to remove him from the bio chamber and begin training him for what he was created to be - a super soldier. "Echo" was harshly trained in the ways of guerrilla combat and assassination subtlety. The SSI fashioned "Echo" into a weapon they were truly proud of.

In October 2005 The Arachnos Organization staged a synchronized attack on Paragon City. The Ziggurat was besieged in order to free the "destined ones" - in addition, Arachnos operatives also struck other points of interest; one being a secure facility they believed belonged to Crey Labs. It was actually the facility responsible for "Project Echo". The Arachnos operatives stormed the small environment and dispatched all resistance - save one. "Echo", now approximately thirteen-years-old, made quick work of the adversaries. It wasn't until a Fortunata Mistress was able to sense the psychic barriers that kept "Echo" from effectively falling apart. The Fortunata used this against "Echo" and the Arachnos departed with their new re-programmed weapon.