((Author's Note: This character has returned for City of Heroes: Homecoming, and some things originally intended for the page may have been forgotten or altered slightly to reflect the 9 years in between.)) 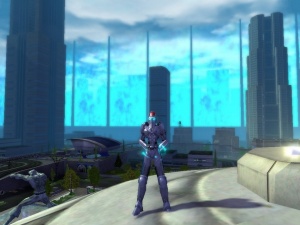 The being we know know as the Robotic Knight is the brain-child of one, Dr. Cassidy Angstrom, a biomedical engineer. A protector of the people in a shiny chasis with abilities to quell criminals, and apply concussive force if necessary to uphold the good. However, she could not perfect an A.I. with enough computational power to determine good versus evil intent with the efficiency needed. She need one of the greatest computational devices known to man: a human brain. Being of relatively strong morals, she wanted a willing candidate, one who'd be able to donate to such a cause. That person was Officer Scott Graham, and he would become the entity known as Unconscious Thoughts.

Thoughts of the Multiverse

It seems in this multiverse, there are many versions of the Silver Robot about. Some are benevolent, however some are quite hostile. The information below is basic info about each alternate universe counterpart of Unconscious Thoughts.

Powers: Able to emit lethal doses of radiation and able to drain energy from enemies to feed his internal power reactor.