All information cannot be considered up to date as the identified individual is currently being held in the Zig. Refer to federal prison file: 11384826

All further inquiries forward to The Frontline

What is known about Rei is that she is a college student, and when not fighting against thugs or other miscreants, she is often seen with a textbook in hand. She takes her studies seriously but does like to have a good time, knowing the importance of relaxing.

Many times though her depression does get the best of her, part of her always has wished she was normal, just your average college student. Not one with a 16 foot wingspan. Or one who needs to be carefull cheering at sportsgames.

More recently after her parents death, she has been darker and focused, bringing to light a few important aspects of her life.

none, currently encarcreated in the Zig 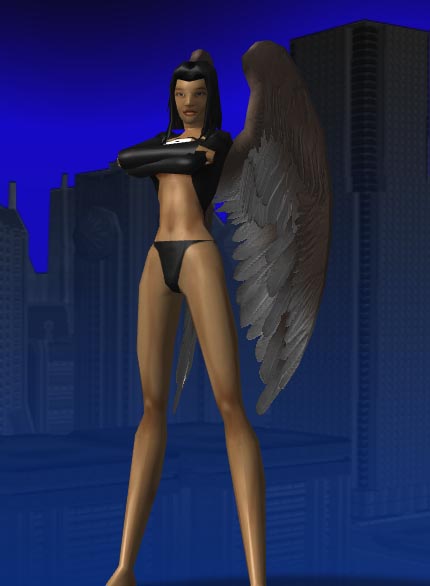 Wondering all her life why she has wings and why her screams cause pain like they do, Rei went to see several doctors and specialists. All they were able to tell her is that it is a genetic condition. Not being sated with thier answer she has decided that she wants to know more and has gone to college in the hopes that she will find the answer she seeks. She asked her parents at a young age if they knew why, and to this day they still say that there is no known reason.

Recently, July 23rd to be exact, her parents were killed in what was deamed a supervillian act originating from the Council. At this time she dosn't know why but has recieved a mysterious package when she was notified that her parents would not be buried and that she would not have access to the bodies.

Agawa Rei is currently located in the Zig with a federally sealed case, it is unknown at this time when she will be released.

Only fellow members of The Frontline at the moment, feeling the strongest ties to Nyte-Owl and Kara Nova. She has also had a few chances to team up with Johnny Turbo.

The Council has recently become the target of many of Rei's actions, having been involved in the death of her parents as well as targeting The Frontline.

Having rather obvious wings and a piercing scream, made it difficult for her to grow up. Unlike many she really does not have a secret identity, not having any way to hide her wings. This dosn't even go into the problems her parents had when she was a toddler bawling her head off.

Her bones are hallowed out and thin.

Her wings started of as vestigal, able to be moved but not granting her any measure of flight, they first fully developed around the age of three, only becomeing proportional as she went through puberty. Only in the last year have they grown strong enough to allow her to fly, although at this time only at limited speed.

Rei's voice has always been piercing when she screams. Although soothing and normal when she talks, if she raises her voice it takes on it's shriller properties. Her parents learned this when she was first born in the delivery room. She has learned control and is able to direct her cries towards specific targets as well as to help her friends by causing thier body to resonate on a specific frequency.

At a recent experiment for college, Rei had her voice measured at 160db (decibels). 140db is as loud as a jet engine, 180 causes the death of tissues involved in hearing.

Anything over 110 db becomes painfull. 194db is the loudest possible sound our atmosphere can support.