RIP. As with all my toons, Valerie was retired when I quit near the beginning of September. Anyone who wishes to use this name and space, please feel free.

A History of Depravity

The drums roared, the flames blaring as the shadows danced their infernal waltz upon the archaic stone walls. The temple had been whipped in to a frenzy, both figuratively and litterally, the tall, dark skinned woman, the high priestess, holding a long, cruel lash in her hand. The worshipers were a flailing mass of legs and arms, sweat soaking their writhing forms as the halls echoed with their depraved screams.

The sun rose over the horizon, gleaming off the golden decorations of the temple. One by one, and a few in new pairs, they returned to their houses, drained physically and mentally. Again, the temple was empty, save for the single priestess. Val gazed deeply in to the fire, grinning at the success of the worshiping, both her and her mother brimming with energy.

Years upon years had passed, the sand whispering across ruined adobes. New houses had been constructed, a bit more advanced than the previous inhabitants. Val sighed, looking out over the newly constructed town, having seen this dozens of times before. It was nothing new, but she knew that with every new generation or settling group of nomads, their interest in her, and her mother, was waning.

Years rushing by like nothing to her, she watched as more and more, the inhabitants cared less and less of them, or the temple, which has, after decades, begun to fall in to ruin. The only thing that remained inhabitable was the worship room, and even then had partially caved in, the firepit flaring with a diefic fury. Weeks passed and nothing. There were no more worshipers. There was no more care. Technology and science had replaced them, and she could feel herself growing weak.

Knowing that there was only two options, and only one that would allow her to continue existing, she performed an ancient ritual, binding part of her mother's essence in to her body. With a nearly heavy heart, she stepped out of the temple, for the first time in so very long, feeling the nearly forgotten sensation of the sand, soft in the hot, desert air, brush against her cheek. Lifting a foot, the inhabitants of the town can still remember the day that the sky was filled with a blinding fire, if but only a second, as the figure flew through the sky, in to the horizon, the temple collapsing entirely in an earth shattering crash, as she vanished from sight.

What was this place, she wondered. What strange oasis of metal and lightning. What was more intriguing was that nobody had seemed to give her a second glance as she landed, her eyes blazing. She looked around, never having seen such things before, obelisks of that gleaming metal towering beyond the clouds, hundreds of people with powers such as her's. Still, she had her mission, and so she began spreading the word of her mother.

Half of the people seemed to ignore her, refering to her as something that was a 'Fanatical Nutjob', and the other half responded with an obvious feigned interest. Days later, she was shown her way to a 'Super Group' that she was told may interest her. Upon arriving, she quickly discovered that this was not the only one specilizing in what she had come to offer, and that there were dozens more. The girl panicked, realization setting in and assaulting her essence. She tried to fight it off, but she could feel herself being corrupted, realizing that what she stood for was no longer sacred or taboo. Unable to stop from absorbing such high amounts of lust and carelessness, and certainly never having experienced so very much at once, she screamed, the fire flickering wildly in her gleaming eyes as she was changed... 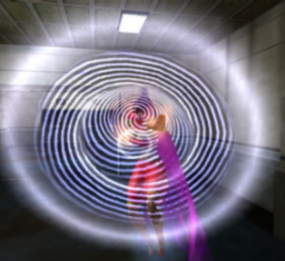 Paragon would never see Valerie again, at least, not the cheerful, love spreading one. Though, it was not as if anyone cared, either. They had a plethora of heroes and one less would make no difference to them. Some citizens would remember the oddly dressed woman, but only in passing, unable to even recall her name. Before, the woman showed much compassion, doing what she could to spread love and caring, her life's work suddenly being shown to be worthless. Arriving in the Rogue Isles, she knew that the only true way to spread any semblence of love, now, was to do so the only way man kind knew how to, in this age. Tainted and twisted, she no longer made any attempt to restrain her lustful powers, no longer saved them for rituals, and no longer cared who she used them on. 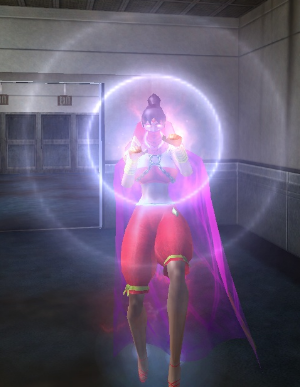 The world had given birth to a new creation, one of anger and lust, dominance and hunger. She would do as she pleased, assaulting the so called 'hero' empire for showing her of her wasted existance, and feeding upon the lust and desire of the Isle's inhabitants, as well as any hero wise enough to know that what she offered, was the most perfect they could ever recieve.

Valerie, being the product of a djinn, despite the creature having been a rather weak entity, delights in the granting of wishes. Only half djinn, though, and even that blood weak in her veins, she is unable to perform the miracles one would believe her to, simply being able to alter her body and personality. When not under the influence of her own powers, the girl is very calm, collected, and polite. If one would not know better, they could almost assume that she has no personality of her own, though this is certainly false.

In regards to her "Empathy", as many call it, though this is quite false as it is not a power, rather part of her very being, she has quite a diverse taste. The girl feeds upon raw emotions, absorbing any nearby ones, and most noticibly those directed or felt towards her. Lust, love, desire, curiousity... she craves them all, and enjoys nothing more than to try fanning the flames to any of them, which she does by using her powers of mental clouding. Her words become sweet nectar, her lips like a gateway to ecstacy as her words cloud the minds of her 'victims', making them reveal to her their deepest, most embarassing desires and fantasies, removing any inhibitions they may have, as well. It should also be noted that she is affected by all emotions, though none as strongly as those of want.

While her hunger is satisfied by any being, she takes the most delight and 'nourishment' from those of magical, divine, or inferal blood. She has been known to go out of her way to elict feelings of desire from faries, elves, demons, angels, and all of the like. She will admit, though, that she has never been given the delight of tasting another of her own kind.

Her powers of depravity aside, the girl is also able to control flame, fly, and teleport, thanks to the combined blood of djinn and goddess. She has recently mastered the magic of the ancient Mu, and displays all of these powers with a ruthless fury on the battlefield. 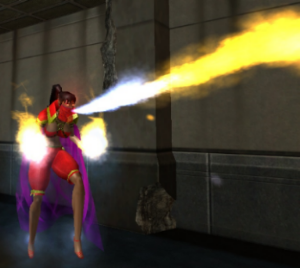 A beautiful golden oil lamp rests upon a large, red silken pillow, golden tassles hanging from the seems. The ornate lamp is a dazzling display of beautiful gems, yellow sapphires, diamonds, and a massive, round ruby set near the top. The handle curves in patterns that almost seem impossible, giving those of lesser will headaches if studied closely, the spout in a sharp, long, upward arc, ending in a curving tip.

In her cape, Valerie keeps her lamp well hidden, perhaps in a pocket dimension, or perhaps an even more secure place. At will, she can reach in to retrieve it and, just as easily, return it, letting the golden trinket vanish from sight. It is with her bracelets that she is forever bound to this item. If she is slain, her essence will reform inside it, the worse the demise, the longer the regeneration time. The only true way she can taste death's true embrace, if one of her kind can truely even 'die', would be if the lamp was melted or destroyed, a rather ironic fact by her fiery powers.

One should be beyond cautious when giving Valerie the role of domination, and following the order to worship her. It has been seen that the essence of her mother will begin to boil to the surface, taking control of her as she becomes mindless with her own lust, the flames growing bright in her eyes. She will grow 'jealous' and infuriated should any of her demands not be met, both during and after the meeting. It takes some time for her to regain her composure after such a meeting, and acts nothing like herself. 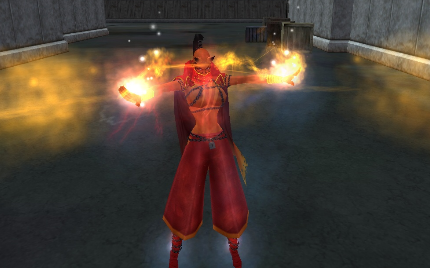