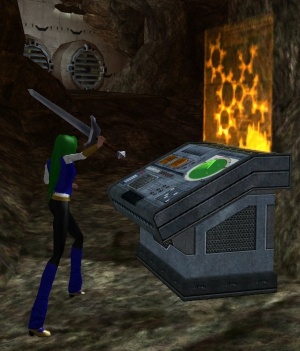 I needed a character to play with some characters my kids had made on the server, and it seemed like a no-brainer to bring my favorite one into the Virtue universe. How sad would it be for there to be a universe without Yakmala, after all? :3

Yakmala (pronounced yahk-MAH-lah!) was a first-millenium warrior princess who was instrumental in the founding of the tiny nation of Parmistan. When she later sacrificed her life to hide our dimension from a Lloigor probe, her spirit was added to the Order of Battle Maidens in the Twisting Halls of Khazaram, as a recognition of her efforts in life. A dynamic presence in life, she became a celebrated figure in Parmistani history... to this day, her name is still invoked there as both a blessing and a battle cry.

Daresh Samizar, a young Parmistani driven by a desire for his nation to return to what he sees as its days of glory, recently risked all to compete in The Game and, in victory, requested as his boon that the spirit of ancient Yakmala be made flesh again. He expected she would lead his nation, but after over a thousand years of unending, glorious battle on the Tomec Mountains and the shining ice fields of Ankaratesh, Yakmala had little temperament to again shoulder the responsibilities of governance. Worse, she felt no connection to the strange and insular Parmistan of today. She entered The Game herself and, on emerging victorious, claimed her boon: to leave Parmistan and make her way as a battle maiden in the wider world.

It should first be noted that Yakmala's current body is, by all accounts, completely different than the one she had in First Life. Daresh Samizar's boon was inadvertantly worded in such a way that it was her spirit form that was incarnated. Yakmala still possesses the abilities and potentialities of that form, though she was returned in a very weakened state. She had recaptured enough of her abilities, through intensive training, to be able to best The Game, but training alone would not be enough to fully reawaken her former strength. Her arrival in Paragon City, however, opened new vistas for constant challenge, and her powers have been returning at a remarkable pace.

By focusing her intense will to battle, Yakmala can summon her weapons and armor whenever she needs them. While her most commonly-manifested weapon is the broadsword she used in the Order, she has also employed throwing knives, shuriken, caltrops, and other tools in her pursuit of the art of battle. Yakmala can manifest the visible armor of her Order, but she only does this when facing foes she hopes will prove worthy of that honor. More commonly, she just draws the aura of her will about her. Because of the nature of this defense, attacks that go directly against the will itself, such as psychic strikes, are the most effective against her.

Yakmala's spirit form is light and playful, reflecting a large part of her natural bent. Just the same, woven throughout her being is the intense kind of commitment, and strength of will, that is so often found in those who have won their way onto the Order of Battle Maidens. She uses the form and bent to hide the rest.

Based on her long experience, Yakmala firmly believes that battle is joined long before the first blow is struck. She knows she can never count on being the strongest fighter in a conflict. Recognizing that her outward appearance is not fearsome, she is happy to improve her odds with an outward demeanor that will lull potential enemies into a false sense of confidence. Her scrawny body and playfully silly persona distract others from seeing that her abilities are manifested by an iron will, tempered by centuries of battle experience, and honed with rigorous drills.

Yakmala has recently taken three new heroes under her wing: the potentially-invulnerable rock fortress, Essence of Stone; Elyre Electric, a being surging with powerful electrical and elemental energies; and the genius Chiyo-chan, a Yest-type clone who is learning to master her ability to shape the forces and energies of subatomic physics.