Page is being worked on again... slowly... and I will rebuild the page as I get the urge to.

Zy can be a bit of a mystery at times, occasionally being a nice person, occasionally being hostile to everyone... depending on her mood. But generally she will just sit in a corner and listen to people talking, responding to questions with either one-word answers or simple gestures. 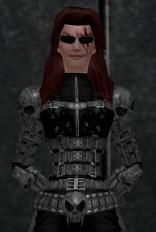 Zyren started life as a normal child living in St. Martial on the Rogue Isles. She went to school like every other child, went out with friends, played games, and went out on dates, the usual for a teenage girl. The only thing exceptional about her was her knack for electronics and robotics. At the age of 16 she had already built a prototype powered armor, although at the time it would barely have stopped a bullet. She had also built herself a few very limited robots to help her around the house.

Unfortunately for her being able to build such devices at such a young age attracted some unwanted attention and she found herself under observation by a group called the Sky Raiders for some time. She tried to get help from various people she knew, but nobody wanted to have anything to do with her after they found out and she found herself completely alone after just a short time. Even her friends had written her off for dead.

After about 3 months of observation they made their move, abducting her off the streets as she was walking home one day. The next few months are a blur of being held hostage and forced to help them design advanced devices for their use. The most notable of these being an advanced version of their jump bots. After a while of this they began to let off and allow her more freedom, and eventually she decided to join them outright.

Being a Sky Raider didn't last very long however, as a few months later she gets stuck in a fight with Longbow agents during a heist. Desperate for something to fend them off she grabbed what appeared to be a set of 'magical' gauntlets in an old box nearby, unfortunately these gauntlets were not in fact magic in origin, but a failed prototype developed by Crey years before and stolen before being tested. After putting the gauntlets on they locked themselves to her wrist and activated. These gauntlets were in fact a new 'nano-infuser' designed to inject specialized nanobots into the user. But since the gauntlets were years old now and an untested prototype to boot they overloaded on activation and exploded in her face knocking her out and leaving her helpless to the Longbow agents.

The accident left her in a coma for about 2 weeks and when she awakened, in the Longbow's base, she discovered that not only had she almost lost her eye and had scars across her face and arm but the Sky Raiders she was with had fingered her as their leader. The Longbow let her stay long enough to finish healing her wounds and then shipped her off to the Zig. Once there she began to discover what the nanobots she now had in her blood were for, slowly learning that she could control the specialized field they emitted to create force fields and other effects, weak in the beginning but getting stronger daily, this was in addition to the advantage of a slightly increased metabolism, ability to heal, endurance and reaction time. A few months later Arachnos invaded the Zig and she escaped in the confusion.

Issue 1: After the Zig

After her escape from the Zig, Zyren began looking for a place to begin her life anew. It was during this time that she begain doing small robberies on her own and eventually cobbled together enough scrap elements to build herself a small robot to help her survive. She wandered from place to place, constantly looking for the next 'job' and for a place to live for a short time, at least until her funds ran out again and she was forced out onto the road again. During one of her small-time heists, breaking into an un-used warehouse looking for pawnable items she came across a small compact rifle, it is this rifle that she continues to use to this day. 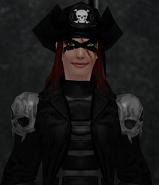 It was during her wanderings that Zyren came across a small cat-like girl and almost immediately struck up a friendship. They were almost constantly seen together stealing what they each needed to survive. Zyren soon also found out that Felis was currently a member of a group of air pirates called The Dread Aces and after meeting and talking with its captain, The Crimson Cutlass was accepted into the group as a member. This gave her access to much more advanced materials and electronics which she quickly used to multiply her small army of bots from the single prototype to a full six robots of various designs. Her largest and favorite bot being R.A.W.R (Remote Assault Weapons Robot) which she was almost always using in practical jokes to scare people.

Also during this time Zyren's attachment to Felis grew to the point where she offered to adopt her and took her in as a part of her family, giving to her a small collar made from the best items Zyren could lay her hands on. Unfortunately one of the items she 'aquired' was of a magical origin and began changing the already volatile Felis features once again. ((See Felis Noctu's VV page for details.))

This all lasted until Felis left the Aces for certain reasons, and was followed by Zyren who was saddened by having to choose between family and friends. She did her best to keep in contact with the remaining Aces but soon fell out of reach with almost all of them.

(( Details on Relation to Felis and the weird happenings with alternate versions leading to the creation of the foundation. Also planning to add a small note as to why Zyren's attitude has taken a large southward bend after her disapearance. ))

(( Details on how she has become a Night Widow without arachnos knowing, as well as how she got her hands on a crab spider's suit. ))

(( Infiltration of the Shadow spiders and what is happening there. ))

(( Escaping after being discovered by the Shadow Spiders ))

(( Capture by Arbiter Death and the modification after being mind-wiped ))

(( Picking on Rook, the overthrow of the SS and 'discreetness' ))

(( War with the SS and the torture of Jimmy, the death of Victor and Revenge. ))

(( War ends, stuff happens and she starts to mess with Rook and go crazy from a relic she acquired. ))

(( Zyren regains her mind, joins and leaves Dirty Hands Inc, and rejoins the Black Tie, assisting in many atrocities and making many enemies along the way... ))

Zyren is currently a member of The Black Tie.