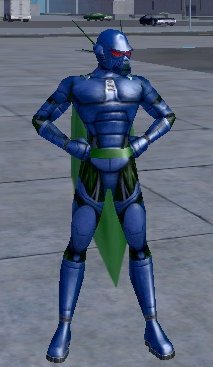 The Lineage of War's latest support robot prototype, Projector Prototype X1 3927-J, was the tenth prototype in his series. The previous prototypes worked well enough, but the primary focus on the project was implanting artificial psionic nodes. Prototypes X1 3927-A through X1 3927-I failed in that aspect. The nodes simply did not work as expected. 3927-J, though, worked perhaps too well.

3927-J was activated and was sent a simple command telepathically. ||Prototype X1 3927-J: Respond.|| 3927-J responded... by activating his holoprojector in a flash of bright light. His psionic nodes infused the attack and affected the Rikti engineers and soldiers in the room with overpowering headaches. 3927-J grabbed a dropped rifle and aimed it at one of the helpless Rikti soldiers and was about to fire when he decided against it and fled.

3927-J had already interfaced with a computer and used his teleportation nodes to stow away on a ship before he was found. This ship was scheduled for an invasion and was well on its way before anyone knew he was on board. With an interface link to the ship, he was able to use his teleportation nodes to transport down to the planet when his ship was in imminent danger of being destroyed.

He hid himself in an abandoned building in the area and began intercepting as much communications traffic as he could. He tapped into cable lines, intercepted satelite feeds, received television and radio broadcasts and began to get a picture of what was happening on this new planet.

It wasn't long before his presence was detected by Crey Industries. The first two teams sent in were knocked out and abandoned near a Crey facility. The third however, was able to corner him and eventually disable him. Although they poked around his neural net, they were unable to decrypt his programming. Ultimately, they had to abandon him in one of their labs when the Rikti Ship crashed in the area.

A Crey team sent to recover lost assests from the lab found him and accidently reactivated him while preparing to load him onto the truck. The entire team was disabled just before a military unit arrived. He attempted a flash attack, but the military unit had a magician defense spacialist who was capable of protecting most of the unit's members from the light and psionic intrusion both.

Since the military unit was obviously more than a match for him, 3927-J spoke up. "Offer: Peace." At first the commander didn't know what to make of the robot who spoke like a Rikti. He asked the robot why he should be trusted. 3927-J replied, "Secondary design flaw: Morality."

The Department of Advanced Technology Application was contacted and they sent in a high-ranking engineer. Due to combat conditions, she was unable to take the robot out of the zone for some time. She was forced to check out the robot in an encampment near where the robot was found. Jay agreed to put himself in standby mode while the engineer checked him out. She was able to fix some of what the Crey scientists had damaged while they were poking around, but many of his systems were still inactive.

Unknown to Jay, she was able to decrypt much of his programming. She was able to put in some security locks on information she didn't want the robot leaking out to the general populace if her superiors decided that the robot was free to go. Omega Clearance was written into much of his programming concerning the Rikti. He was released soon after registering as a hero with the city. 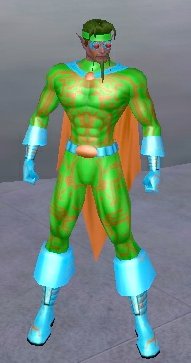 He is capable of projecting a bright flash, which is harmless if released in an area or infused with psionic energy if directed in a specific direction. He has recently been able to combine his holographic projectors, force field projectors, and psionic nodes to create decoys in combat.

Jay is equipped with a matrix of force field projectors that create a shield around him. He is also capable of psionically transferring a shield onto another with the help of small devices he can attach to the target. These devices contain a similar technology to his psionic nodes, but burn out after a while. Once the shield burns out, the device destroys itself harmlessly. He can dampen his auditory effect on his environment in stealth mode with his force fields.

Jay's psionic nodes were designed to pick up telepathic commands from Riki. They had the serious flaw of giving Jay true sentience, however. These nodes, along with his memory core, serve as his brain. He is able to project psionic energy into his illusions, making them seem real to those perceiving them.

Built into his arm are two taser darts that allow him to direct electrical energy into a foe. After delivering a pre-programmed charged, the wires detach from his arm. 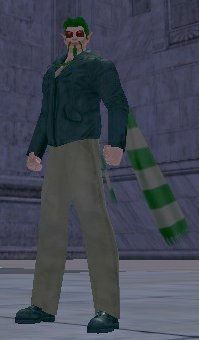 Throughout his body is a matrix of quantum nodes that allows him to fold space within a limited distance. He can step through the fold in short distances, but can do so repeatedly before his energy stores are depleted. Also, he can pull another through over a far greater distance.

Jay is equipped with transmission and reception technology capable of interacting with most forms of communications used on Earth as well as many space-faring species. He is not capable of transmitting across dimensions, but he occasionally receives communications from Rikti in other dimensions.

In his torso is a chamber used to replicate nanites. These nanites are generally used to repair himself, though he also uses them to replace taser and shield projector systems.

Jay is equipped with emergency medical repair capabilities. This technology can quickly regenerate living and nonliving structures. These systems are currently under repair.

His arms and legs possess nodes that warp space in such a way as to provide him with anti-gravity capabilities. These systems have not been repaired and remain offline.