The Archetype is a weapon created by Crey Industries Revenant Hero Project. It is a genetic clone created from a sample of the hero Statesman's blood for the purpose of creating an Incarnate level hero to serve on the Paragon Protectors. The clone has the appearance of Marcus Cole the Statesman and is in peak human physical condition, but possesses no superhuman abilities. Because of his lack of superpowers the clone is considered a failure, but his body serves as Crey's template for continuing the project and the potential to unlock Incarnate powers within their army of Paragon Protectors. While the clone possesses no super powers he has inherited the ability to increase in levels of power and ascend to Incarnate levels of power which is a trait the Paragon Protectors do not possess.

Before the clone could be terminated, reconstructed, and reconfigured for further study into unlocking the Incarnate levels at clone birth, the Peacemakers supergroup raided the Hero Lab taking the Clone into custody and destroying all information and research regarding the project, leaving Crey unable to reproduce years of work and study. The Peacemakers release their custody of the clone over to the Freedom Phalanx and the Statesman as it was only fair that he decide the fate of his own duplicate. Word spread across Paragon City that their are 2 Statesman in town and the attention and speculation reached the doors of Crey Industries. The Countess furious at her researchers for their failure of losinng the clone and allowing it to fall into the hands of the Freedom Phalanx took out a hit on Ms. Liberty as retaliation. While the Phalanx entered City Hall in Atlas Park with the clone in PPD custody following up the line an assassin readied himself acroos the park. The assassin took aim with Ms. Liberrty in sight as She entered the Hall. The clone displaying total discipline and being in control of his surroundings sensed that something wasn't right. As he stopped and turned he caught a glint of light reflecting of the assassin's rifle. His brain began to process what was going on and began calculating the trajectory of the shot and determined that Ms. Liberty was the intended target. The clone was able to break his captivity and captors as he ran up the stairs towrds the Phalanx. As the assassin fired his shot the clone lept towards Ms. Liberty with his right arm extended pushing her out of the way and taking the shot. The energy blast fired disintegrated the clones right arm and left him in a state of shock that caused him to go into a hibernation. As other members of the Phalanx dispatched to apprehend the assassin, Statesman and Ms. Liberty stayed with the clone as they had him teleported to Chiron Medical Center. The clone recovered and had been outfitted with a bionic right arm. As he gained consciousness he was greeted by Statesman and Ms. Liberty. Statesman thanked the clone for his sacrifice and for protecting his granddaughter. He told the clone that he will not be terminated and will be allowed to live out his days as he may choose. The clone assigned himself the name Cole Richter to honor the Statesman and a wife (Monica Richter/Battle Maiden) and a former friend (Stephan Richter/Lord Recluse) of the man he was cloned from.

Taking the codename ARCHETYPE, Cole asked to join the Peacemakers supergroup under the leadership and guidance of John Winchester. John is the team leader of the Peacmakers and is responsible for putting together the team of heroes who freed the Archetype from his evil creators. Cole was given a second body armor made from the same material (Impervium) as the one given to him by Statesman. This Peacemaker body armor is white in color with a light blue cross pattern and a blue and white peace sign on the center chest. As part of the Peacemakers Cole was given the group's signature blue and white utility belt. Shortly after being sworn into the Peacemakers, ARCHETYPE deployed to Galaxy City at the start of what would later be known as Galaxy City's Last Stand. Galaxy City became overran with alien beings known as Shivans. ARCHETYPE entered Galaxy City by crossing a small Chasm where he was greeted by Freedom Phalanx members Sister Psyche and Back Alley Brawler. After Assisting taking down some Shivans ARCHETYPE recieved a communication over his head set to assist the hero known as Blue Spectrum who can assist in escaping the doomed city. Allowing Blue Spectrum to absorb some of his strength and return to the battle. Blue Spectrum defends the remaining heroes as ARCHETYPE presses on to scout past the tunnel ahead. As ARCHETYPE exited the other side of the tunnel to be greeted by a squad of Shivans which he disposed of quickly. A call from Officer Daniels came across ARCHETYPE's headset with a message that he should be within teleport range but something must be blocking the signal and then the headset cut out. The street began to rumble and shake as a Giant Shiven emerged from beneath the street. ARCHETYPE fought the monstrousity to a stand still until other heroes and some villains arrived to push back the Giant Shivan. Just then everyone escaping was teleported to a Longbow Safe Zone where helicopters wait to fly refugees to safety in Atlas Park.

After establishing himself in Atlas Park, ARCHETYPE was again contacted by the Freedom Phalanx and given a mission under the callsign "Death From Below". His mission was to join a team of heroes and infiltrate the sewer network under the city, taking down the villain groups that reside within as they make their way to the ultimate target of 2 Hydra creatures. These creatures secrete chemicals that can enhance a heroes abilities and are considered too dangerous to let fall into the wrong hands. The heroes battled their way through three levels of sewers taking on the Hellions street gang, Vahzilok, and Lost before entering the Hydra Nest and taking on the beast's two disgusting heads. Upon completing their mission ARCHTYPE and the other ally heroes were teleported back to Atlas Park for debriefing.

Despite having no powers ARCHETYPE has proven himself to be a valuable asset to the hero community. In recognition of his efforts he has quickly earned promotion to the title of Peacemaker amoung his supergroup peers. The Peacemakers research team has uncovered the Crey Secrets hidden within his clone DNA, and are in support of pushing Cole to ascend to Incarnate levels of power.

ARCHETYPE has has advanced in level and skills through simulated training in the Peacemakers mission architect. His new powers have been allowed to be tested in the field from time to time. ARCHETYPE was sent to Montague Castanella and the Midnight squad to study and test his skills against magic. Upon proving himself to the Midnight Squad the ARCHETYPE was sent into the past to Cimerora as a gift to train under Impervious. Impervious pushed the clone's abilities beyond their limits. It was Impervious who noticed signs that the clone had developed a new ability. It was at the completion of his training that ARCHETYPE was given a new uniform resembling Impervious' own armor in a celebration at the location of Impervious high upon his tower. At the completion of the ceremony Impervious pushed the clone from the tower. As ARCHETYPE fell towards the earth below something inside of him was set free and in a burst of energy the clone began to fly. 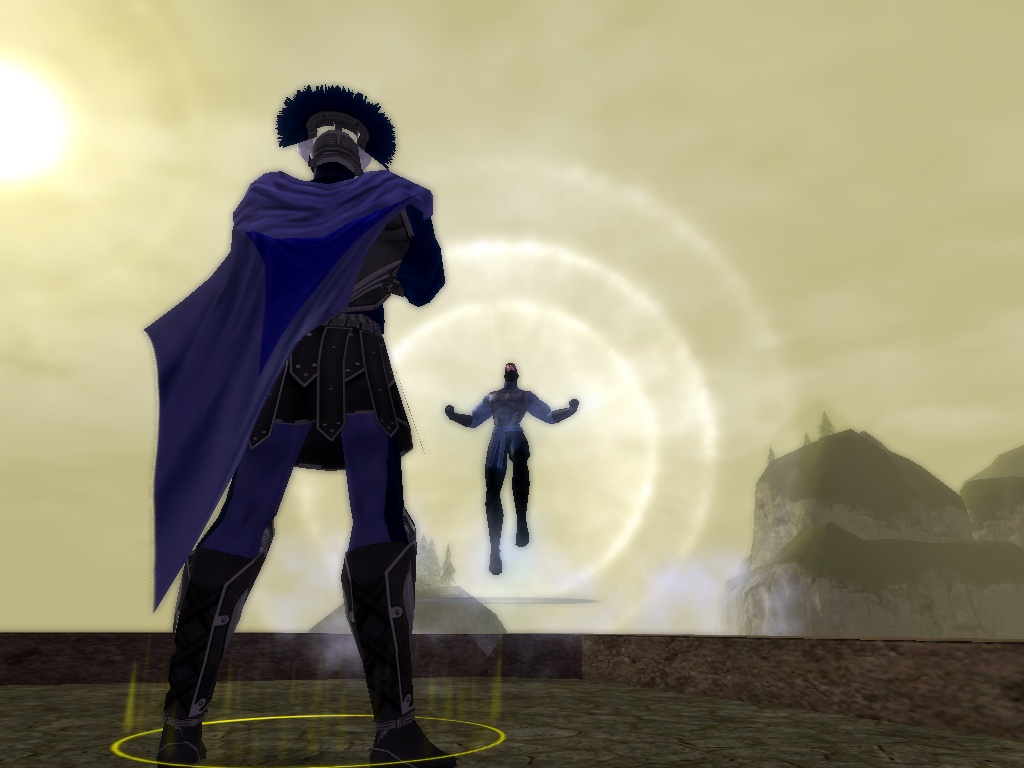 Author's notes: ARCHETYPE was created as a tribute character to comic book genre heroes Statesman, Superboy, and Captain America/Winter Soldier (Bucky Barnes). He was created when I recieved the news of earning the Statesman Loyalty Program Rewards Helm of Zeus. While the Helm of Zeus looked cool it didn't work as a costume piece for any of my existing characters and I decided to create a clone of Statesman. The name, while you would have thought it came from the character creation screen actually came from a thesaurus while looking up the word clone. Archetype displayed as an alternate word and I looked up the word in a dictionary which defines archetype as the original pattern or model from which all things of the same kind are copied or on which they are based; a model or first form; prototype. The name fit my character perfectly and the ARCHETYPE was born. I have thought about rerolling this character as a human only Peacebringer in an effort to create a character that could have access to abilities from each archetype in game, but Peacebringer doesn't hold up to my expectations of what I want this character to be.